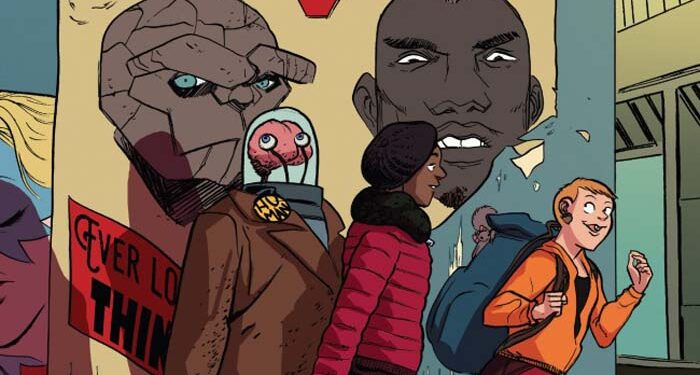 In this issue, Squirrel Girl goes off on vacation to Canada, joined by her friends (Tippy and Nancy) and her mom. If you’re worried about who’s handling her usual crime beat in New York, it’s okay because Brain Drain is filling in. While Brain Drain metes out his own brand of algorithmic justice, Squirrel Girl battles boredom and the Mystery of the Missing Muffin. It all seems simple enough, so why is it that almost everyone Brain Drain meets seems to be the same person? And why are hundreds of miniature people, identical to the ones Brain Drain keeps meeting, living underneath the Canadian cabin? Trust me, it all makes sense. After last issue made me count on my fingers while reading, this issue went one step further. Suddenly I found myself doing my best Orson Welles As The Shadow impression (or The Brain as The Fog, take your pick), reciting all of the hilarious lines which robotized brain-in-a-jar Brain Drain spouted throughout this issue. I love it; here I am, a grown man, being overpowered into acting like a fool by the sheer brilliance and fun of a comic book.

And that’s the power of comic books. Wait, scratch that… that’s the power of great comic books. They can spark our imagination and suck us into their world completely through incredible, sometimes bizarre, storytelling and wonderful art. I know it’s wrong to compare titles, especially ones from rival companies, but I have to say that Squirrel Girl is real a young, dangerous human animal and it genuinely deserves success. No way? WAY! In a great series, this issue is probably the best so far. From the odd silliness of seeing a masked brain in a jar fighting crime to the choices of Squirrel Girl’s hilarious reading material (plus all the liner notes on every page), it’s pure genius which exudes creativity constantly. From starting off with telling a straightforward-yet-quirky day in the life of a superhero, it ramps the story up to levels of insane (yet logical) mayhem with every page. Not a moment goes by where it doesn’t offer something fresh, quirky, funny and…

Damn it! You’ve got to read this! What else do I have to say?

I could ramble on about how amazingly funny and intelligent Ryan North’s writing is, or how Erica Henderson’s art is such a perfect fit for this book, but nothing I can say would be good enough. This isn’t sycophantic praise being heaped on pretentious twaddle, their work is truly astounding while still being completely entertaining. Together, these two have created the best of what comic books can be.

Read it. Enjoy it. It’s as simple as that.