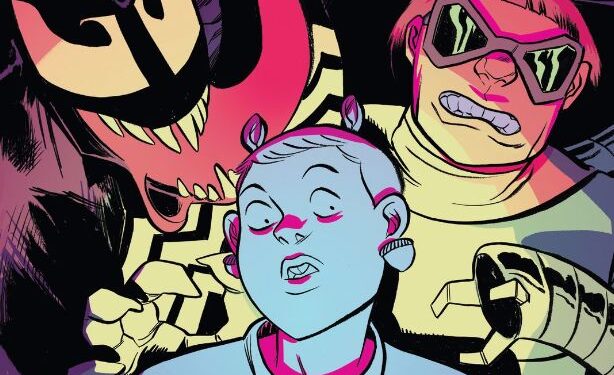 This issue is proudly brought to you by the word “falafel”, computer language and the binary counting system. And if you didn’t enjoy those things before this issue, you probably will by the time you’re done reading The Unbeatable Squirrel Girl #11. Doreen Green, better known as the Thanos-beating, Galactus-battling Squirrel Girl, is enjoying a tasty treat at a diner when she gets involved in a brawl with Doctor Octopus. It’s a battle of logic and common sense, as she racks up another win. Of course, that could never happen though because Doc Ock is dead. But that doesn’t matter, and with good reason, so if you’re going to write a letter of complaint then be prepared for a swift talking-to by writer Ryan North.

She then battles Count Nefaria and dispatches him with just one hand, in quite possibly the most intelligent comic book battle ever seen. All of these are just preliminaries before moving on to the main event, as she tackles the evil, insanity-inducing foe known as Nightmare. And just to make things tougher, Nightmare is taking the form of Venom (despite his more recent anti-hero status). Can Squirrel Girl survive such an onslaught? Not that Onslaught is in this issue, though, so please don’t get confused. But can she? Are you kidding? Squirrel Girl is unbeatable. It’s even there in the title…

Words can’t express how good The Unbeatable Squirrel Girl #11 is. Unfortunately, they’re all I’ve got so I’ll give it a whirl. Sure, this issue doesn’t have some Civil War-style massive storyline behind it which can shake the Marvel foundations to its core. It doesn’t need to. That’s because what it delivers is the most basic element of what comic books should be: FUN. Lots of it. And then a second helping just for good measure.

This is quite possibly one of the most simple yet most intelligent pieces of writing in comic books in a long while. Imagine Sesame Street with computer coding, both educational and entertaining, and then toss in some playful asides from the writer who actually predicts what the reader’s response is going to be. Yes, this comic book is practically interactive! I don’t know what writer Ryan North is taking but I want some!

Guest artist Jacob Chabot does a great job on this issue too, giving the characters a great sense of physical comedy. It may not be the most beautiful of styles, but it’s perfect for the story and that’s what counts. When great writing and great artwork in tandem, it’s hard to really find fault with it.

For all the talk of how comic books need to broaden their audiences and tell more varied stories, this is a wonderful example of how it’s already happening. If you don’t stop and read The Unbeatable Squirrel Girl #11, you’re missing out on a treat.