UKGC Credit Card Ban: How the Decision Was Taken? 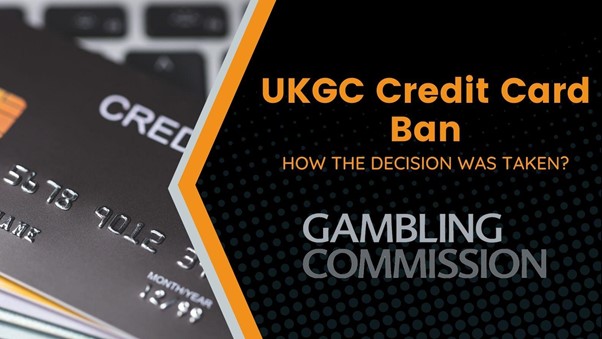 From 14th April 2020, a ban on credit card usage in casinos was implemented by the gambling commission of the UK. The ban ceased the use of credit cards as the payment method in all UKGC licensed casinos.

However, casinos that are not UK-based or are not under the UKGC regulation can keep credit cards as a payment method. The decision of banning credit cards in casinos was a well-investigated decision. Here is how the commission took such a significant decision.

In 2019, the United Kingdom Gambling Commission (UKGC) set up two consultations for gathering data on the ban on credit cards on gambling sites and restrictive usage of credit cards in online casinos. In response, they received answers from UK Stakeholders, consumer bodies, financial institutions, charities, and local government.

GamCare is an organization founded in 1997 that provides overall support and self-exclusion plans for people struggling with addictive gambling. They cooperated with the Gordon Moody Association, a non-profit organization that provides support and guidance to the sufferers to submit responses from people under their care about the credit card consultation. They totally submitted 86 responses, 71 of which were submitted by GamCare.

The UKGC was advised to work with the UK finance and the Financial Conduct Authority (FCA) for information regarding laws and policies for consumers who are in debt.

Most of the data suggested that credit cards have the potential to harm the financial and other aspects of the life of a person when it is exploited for gambling. Some information from a few noteworthy reports is discussed below:

According to the commission, the objectives of the business strategy of 2018-2021 were to safeguard the interests of the consumers, advance gambling regulations, and elevate the overall standard of the gambling industry. Credit Cards allow its users to spend more than their income, which they later have to pay. Gambling using credit cards often leads to crushing the debts of the users due to the development of addictive gambling. Credit acts as a form of “invisible money” as you don’t really see or earn the money you are spending, thus increasing financial vulnerability to the users.

They unconsciously spend thousands of dollars on gambling, which later catches up as credit card debt. Thus, the combination of credit cards and gambling is truly deadly, that can shake the foundation of financial stability of a person. The lack of tangibility of credit makes it dangerous. With the gambling industry rising and lockdown, more and more people are getting intrigued in gambling especially because of the new unique features brought about by the gambling sites, that even attracts young players which is dangerous. Thus, the ban was much needed and was implemented right on time. The two consultations of banning credit cards and restrictive use of them focussed on examining all the potential harms a consumer may face while using a credit card for gambling. They mainly examined four areas that include

After reviewing all the responses, surveys, and reports submitted for the two consultations, UKGC decided in favour of an outright ban on credit cards for gambling. On the day of the announcement, Chief Executive of the UKGC, Neil MacArthur said that credit cards have the potential to lead to significant financial harm and the ban would ensure reduction of risks to consumers with “money they do not have”.

The board of the gambling commission took the informative decision which was based on several reports, types of research, studies, and surveys, which suggested that financial institutions should take responsibility to safeguard their consumers moreover they should collaborate with gambling site operators to provide a safe risk-free gaming experience to their consumers.

The final decision was to protect the consumers from any harm. Considering stories of so many people who spend thousands and millions of dollars of money by unconscious gambling using credit cards, the outright ban on credit card usage for gambling was considered the need of the hour.