Oh My Goodness! Tyler Perry Had Conversations With Marvel & DC 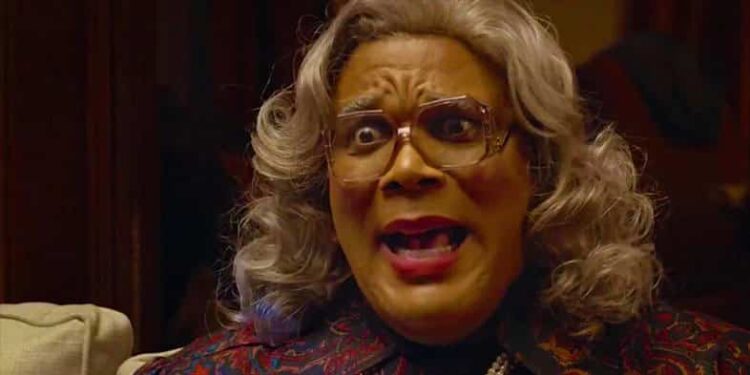 Despite the bad press and poor ratings, Tyler Perry continues to slaughter box office records with his beloved homespun advice-giving granny, Madea, a character who embodies a full spectrum of African-American stereotypes – overweight, uneducated, violent, superstitious and loud-mouthed. While audiences continue to eat up every serving and beg for more, Hollywood has become aware of the many damages the industry has suffered at the hands of Perry. Marvel and DC, however, didn’t seem to get the memo as Perry recently revealed that he has had talks with both comic book studios.

In an interview about his current film on the circuit, Boo 2! A Madea Halloween, Perry told Screen Rant that he has had conversations with both Marvel Studios and Warner Bros. And guess what? He isn’t interested in doing a comic book film with either of them. Hallelujer!

“I’ve had a couple conversations, but I would always say, ‘I’m not the guy to do this’. I’m not the guy that can bring this vision to life cause it takes such a village to pull it together, and I’m not a guy that can work with fifty other directors and producers telling you what to do, how to do it, when to do it. That doesn’t work for me. I saw that in a couple of the sci-fi movies that I’ve been apart of and I think, ‘Uhh, I’m not doing that’.”

Before you start gathering up small rocks for a stoning, it’s important to remember that Tyler Perry has managed to gain a lot of success by working independently. He has written, directed, produced and acted in almost all the films he has worked on. He has also managed to rake in huge returns from films with small budgets. Boo! A Madea Halloween, for example, might have been panned by critics but it made a whopping $73.2 million off a $20 million budget and took first place the weekend it released a year ago. Of course, many DC and Marvel fans will probably breathe a sigh of relief. Tyler Perry’s Boo 2! A Madea Halloween has been roasted by just about every major publication lately:

Either you’re part of the fan base that keeps this staggeringly untalented director making movies, or you can barely imagine finding him funny … In the end, the scariest thing about Boo 2! is the idea that A Madea Easter might be next. — The Hollywood Reporter

The prospect of Mr. Perry’s rambunctious Madea possibly taking on a Jason Voorhees-type killer has an amusement value that is not even vaguely realized here. This movie finds Mr. Perry, never the most deft at the technical aspect of filmmaking, drastically off whatever his best game is. — New York Times

Tyler Perry’s Boo 2! A Madea Halloween is a plodding mess of a movie. Neither funny nor scary, its structural incoherency and lack of relatable characters make it nearly unwatchable. — CinemaBlend

The box office, of course, will probably vindicate “Boo 2!,” but the time is overdue for Tyler Perry to throw a wrench into the assembly line. — Variety

These movies make a lot of money and are cheap and easy to make. Like Madea, Perry’s getting away with attempted murder. I can’t knock his hustle. I just pray I’m not living in a fool’s paradise hoping he’ll make some kind of masterpiece to show us critics how wrong we’ve been. — RogerEbert.com