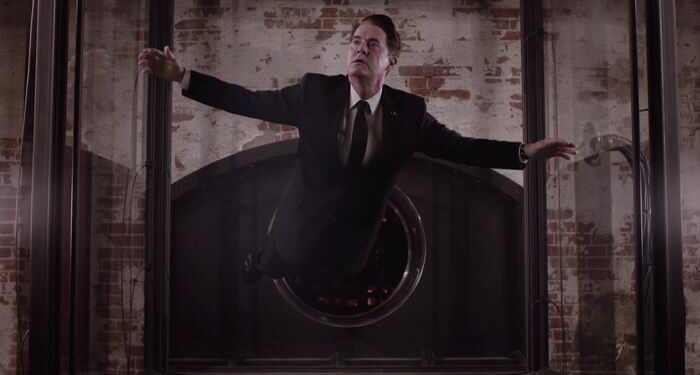 It’s been 25 years, and as predicted both Twin Peaks and FBI Special Agent Dale Cooper have returned. But a great deal has changed in 25 years. The groundbreaking TV show, a pop culture phenomenon which came and went in the blink of an eye, is now just a memory. Living in an era of high-concept shows, the slow-burn weirdness that was Twin Peaks seems out of step. More than that… these first four episodes don’t feel much like Twin Peaks at all. And fans will know that’s a very good thing. In a move which is liable to alienate newcomers and anger the fans who never quite understood the original show anyway, what The Return offers is a massive slice not of cherry pie but of brilliant weirdness. It’s pure 100% David Lynch, with all the joys and hazards that entails.

It’s time for Agent Cooper to leave the Red Room of the Black Lodge, a place he found himself trapped in during the second season’s cliffhanger finale decades ago. However, his evil doppelganger containing the spirit of BOB is still at large in the outside world and Cooper can’t get free until BOB is brought back. Meanwhile, in New York, a college student stares at an empty glass box for days on end, wondering if anything will ever appear inside it. In Buckhorn, two murder victims have become a hybrid. And in Twin Peaks, Doc Jacoby takes delivery of a shipment of five shovels, and spray paints them gold.

If you think things are going off the rails, they are. Starting off by diving off the deep end, this show soon becomes a bizarre array of dream-like imagery, off-kilter sound editing, unfocused storytelling and prolonged shots of nothingness which makes very little sense. Yet, if you’re familiar with David Lynch’s artistic work, you’ll know it has its own internal logic and that it’s some of the best work he’s ever put on screen. It’s weirder than Legion, Lost, Fringe and X-Files combined, and gleefully so. It also screws around with what most people were probably expecting from the show’s reunion – namely, a reunion. Many of the original characters do return, but the joys of seeing their goofy antics is instead replaced by a knowing, bitter-sweet sense that time has moved on. Every appearance is guaranteed to provoke a reaction, from sadness to amusement, but like the town itself it feels perfectly natural rather than a forced gathering.

Cameos come out of nowhere (Wally Brando – played by Michael Cera – is a real comedy standout for how seriously he plays his role), and with much of the action taking place outside of Twin Peaks it’s a gutsy move. This feels more like a David Lynch film than a continuation of the show, with an all-new style and moments which would be considered shocking by ‘90s TV standards.

Twin Peaks: The Return is a series which plays by its own rules. You can love it or hate it, and you’ll almost certainly be left saying “WTF?!” plenty of times… but in its own way it’s a thing of beauty. It’s addictive and artistic, and entirely inexplicable.