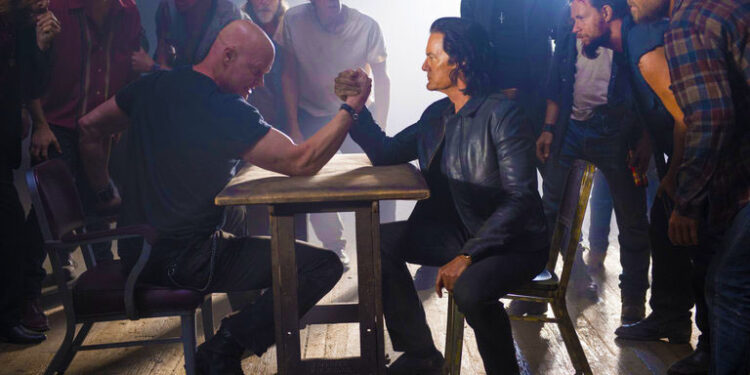 It’s a wonderful time to be a Twin Peaks fan.

In Las Vegas, life is good for Dougie/Coop, as he’s just been given a new car and a climbing frame from the mobsters known as the Mitchum Brothers. However, his good fortune is put to the test when his co-worker plans to poison him. In Montana, the evil BOB/Coop is intent on getting the coordinates Ray has, which may also lead to learning the identity of the person who wants him dead. To do this, he takes part in a lethal game of arm wrestling which has deadly consequences. Meanwhile, back in Twin Peaks, Norma is given some bad news about her business while Nadine and Doctor Jacoby discuss potatoes and golden shovels. Episode 13 probably has the most progress for all the storylines than any other so far. It also has several minutes of watching a lonely man eat soup, seeing a woman watch a boxing knockout on an endless loop as she gets drunk, and a rather frank discussion about how real pies should be made with organic ingredients. Bizarrely, WWE’s Fashion Files parody of Twin Peaks this past week – Fashion Peaks – hit the nail on the head as to what’s going on: it’s all about the metaphors.

While the Dougie/Coop storyline has generated plenty of laughs and tender moments and continues to do so, BOB/Coop’s violent arm wrestling contest provides a strong statement. Return to the starting position. That’s where this story is now. Viewers have loved Lynch’s creativity being let off the leash but, with every episode, the classic Twin Peaks returns. Like Norma’s pie, it’s all about the organic ingredients because when art is organic, it flows.

Norma’s business is creativity, while her business is very much like the TV and film studio system. People in suits will cut costs to make a profit, replacing what’s organic with what’s cheap and trust that the public will still buy the product when the creator’s name is on it. That’s what killed Twin Peaks in the first place, and David Lynch’s message is clear. Yet it’s acknowledged that, sadly, this is how progress often works. Sacrificing the past to make progress into the future sounds like the worst thing ever, in theory. However, this episode also tells the tale of what happens when we don’t progress and move forward. We become stuck in that endless loop and time passes us by. Like Big Ed, we sit and eat soup, watching helplessly as the world continues to move around us.

So which is better to return to? Neither. It hurts, whichever way we bend. Instead, it’s best to return to the starting position. This is David Lynch’s advice for everyone.

Be the artist, the viewer, or anybody else… and embrace those moments of the past, those glories, but don’t get weighed down by them. Nostalgia only gets you so far before it becomes tired and repetitive, and your story will end before it’s time. Instead, the past can be a part of our lives while we head towards the new, different future. But never forget, you’re always in the present. That’s where we operate from, and where our decisions have the most power. From there we can choose which way to progress, as long as we understand the pain and sacrifices involved.

This is an impressive episode, albeit an understated one. It provides enough to satisfy both old and new fans. It’s a symbiosis of artistic integrity and story. Some of the ingredients are new, resulting in a new flavour, but it’s a delicious slice of creativity.