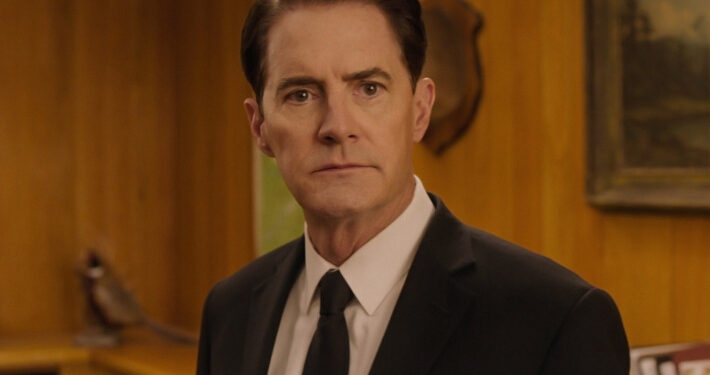 Over two decades ago, Twin Peaks ended and fans have debated its cliffhanger for 25 years. Now it’s happening again with Twin Peaks: The Return. It’s the end of the road and the end of the dream. And, like in life, those endings give way to something far worse… the nightmare of reality.

BOB/Coop reaches the end of his journey, as he fast-travels to the Sheriff’s Office in Twin Peaks, intent on killing those who stand in his way. He may have everyone fooled and be welcomed back with open arms, but the timely return of the real Agent Cooper leads to an intense showdown. With the aid of Freddie and his green rubber gardening glove, Cooper manages to vanquish the evil who has stolen his identity and rescue Diane from the host body of Naido. Yet the real challenge still lies ahead for Cooper, as he must embark on a journey across time and space to rescue Laura Palmer. But can he battle the negative force of Jiao Dai itself, and rewrite existence as we know it? The first instalment of this two-part finale of Twin Peaks: The Return rockets along at the fastest pace possible for this current incarnation of Twin Peaks. It’s creepy, action-packed and full of warmth and emotion to balance out the genuinely bizarre happenings. The tension of BOB/Coop’s appearance at the Sheriff’s Station is palpable, while all those characters who have a part to play follow their assigned roles to perfection. While many mysteries remain unexplained and the cliffhanger is one of the biggest ever, a great deal of the season’s plot is resolved and it all looks positive. It may not be everything the fans want, but it’s enough to satisfy them.

The second episode, and the true finale for the season, pulls the rug out from under the viewers. It may please some, but there are likely to be many who will feel disappointment, confusion and outright disgust at what could be the last Twin Peaks episode ever. Far from resolving the story in any sensible, audience-pleasing way, David Lynch takes a gamble and forces Twin Peaks to descend into the worst thing possible: normality.

The moment Cooper and Diane ride the electricity, the world becomes a dull place. With an identity switch straight out of Mulholland Drive following a telling, mystical (but awkward) sex scene, Cooper blandly plods through Odessa, Texas, leading him to an uninspired confrontation with some rowdy diners. Tracking down a hunch, he finds Laura Palmer… but time and reality have been unkind to her. The same could be said for Cooper, whose usual upbeat demeanour has been replaced by world-weariness. Their long drive back to Twin Peaks isn’t heroic or optimistic, it’s long and boring. It’s even questionable whether they even are Cooper and Laura Palmer.

Then the true nightmare begins, just as this dream ends. Whatever this place is, and whatever time it’s happening in, it’s wrong. In fact, it’s more than wrong; this reality, probably our reality, is an abomination. As a bewildered Cooper struggles to find meaning and purpose, his quest being proven pointless, Laura screams as she suddenly understands the truth.

While episode 17 of Twin Peaks: The Return may give viewers the TV ending we probably all want – despite ignoring the mysterious fate of Audrey – episode 18 sums up the series and its creation as a whole. Is it the future or the past that drives us? Can we truly change the world, or is it all meaningless? Is reality something we can shape around us, or an oppressive force which keeps us down? When the truth of it all finally hits home in any of us, it may feel like the whole world has gone mad… except it hasn’t. It’s the same as it’s always been. The world is mundane, crazy, ugly and beautiful, and it’s painful to look at sometimes because our minds can’t handle it. There’s no resolution of Audrey’s story, no further information about Billy, and no explanation about why Phillip Jefferies became a giant kettle. There’s plenty of new characters and motivation for another series, from the Mitchum brothers and Shelly’s romance to the battle for Norma’s Double R diner. There’s even a happy ending for Janey-E and Sonny Jim, who receive their brand new Dougie delivered to their door.

But for some, the finale of Twin Peaks: The Return will be meaningless junk, a dull road trip where nothing happens until the bizarre cliffhanger kicks in. It’ll be an insult to their patience and their love for the show. Meanwhile, for others, it’ll be something worth debating and discussing for another 25 years.