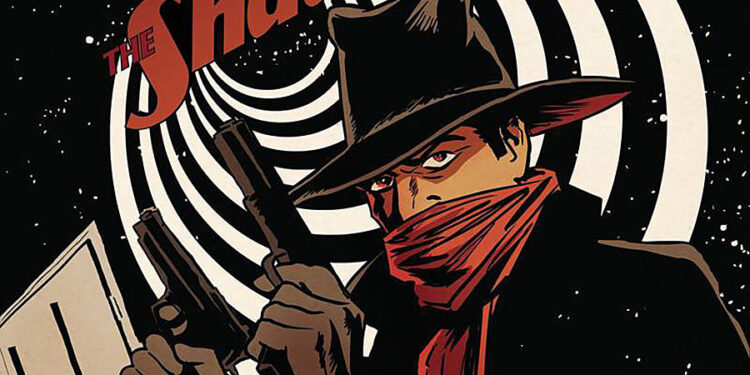 For your consideration today, please meet Kent Allard, a man who wears many masks. To some he is known as Lamont Cranston, to others he’s known as Henry Arnaud… and to criminals, he’s known as the vigilante crimefighter The Shadow. For a man who has many faces, Kent Allard is about to confront them all in a little place known as… The Twilight Zone. [pullquote]The history of The Shadow is a long and complicated one, made even more twisted by all his various story incarnations.[/pullquote]

[dropcap]W[/dropcap]hen The Shadow and his companion Margo Lane interrupt a Nazi propaganda rally in 1937 New York, things quickly turn violent as he shoots into the crowd with his classic .45s. However, as they return home afterward, he’s criticised by Margo for opening fire when women and children could be killed. While The Shadow assures her that he would never harm the innocent, she’s furious when he launches into his old speech of the weed of crime bearing bitter fruit and they debate how he’s lost touch with his real self, Kent Allard.

As they return home, their car is attacked by a mysterious chemical weapon and they’re knocked unconscious. And that’s when things get weird.

When Kent Allard awakes, he’s no longer himself but his alter-ego Lamont Cranston. Or at least that’s what The Shadow tells him, despite all of them being the same person. Or are they? The history of The Shadow is a long and complicated one, made even more twisted by all his various story incarnations. Is he really Kent Allard, adventurous aviator? Is he Lamont Cranston, wealthy playboy? In the original stories they were two separate people, but Allard and Cranston would often impersonate each other.

To add to Allard/Cranston’s confusion, his driver Shrevvy tells him that he isn’t The Shadow. When he visits Margo and asks about what happened the night of the Nazi rally, she can’t quite remember. However, she informs him that Lamont Cranston wasn’t there that night, although The Shadow was. Before he can get to the root of the matter, his nemesis Shiwan Khan attacks demanding to know the true identity of The Shadow… but does Allard/Cranston even know the truth? [pullquote]It’s written well (the narrative introduction as he enters the Twilight Zone is pure Serling) and looks great.[/pullquote]

This is without a doubt one of the most intriguing crossovers in recent memory. The Shadow has been one of America’s longest-running masked vigilantes, created in the 1930s and going on to inspire characters like Batman and V for Vendetta. As a pulp novel character, radio and film anti-hero and comic book figure, the portrayals and writing over the years have led to some contradictory storytelling.

Likewise, The Twilight Zone has served audiences over the years as anthology TV series, movies and more. It’s a place where the rules of time and space can be bent or broken, where ordinary people can be thrown into the most extraordinary of circumstances. Narrated by Rod Serling, we were always told that anything was possible the minute someone stepped into the Twilight Zone. Given the nature of that, The Shadow with its complex history fits right in.

And the combination is breathtaking.

It’s an intriguing study of the both the character and his various media incarnations, although don’t expect too much action. This is more of an odyssey as we follow Allard/Cranston/The Shadow in trying to unravel his confusion regarding his identity. It’s written well (the narrative introduction as he enters the Twilight Zone is pure Serling) and looks great. Not only that, but the final moments introducing the most famous actor to have ever played The Shadow are mind-bendingly brilliant.

On the down side, if you aren’t too familiar with the title character then it’s possible that some of the references and his bizarre media history may leave you scratching your heads. However, it doesn’t talk down to the readers and it’s intriguing enough that anyone interested will take the time to learn more of The Shadow’s rich history.

It’s a wonderful start to what promises to be a very compelling mini-series. Just don’t expect The Twilight Zone: The Shadow to go easy on you.