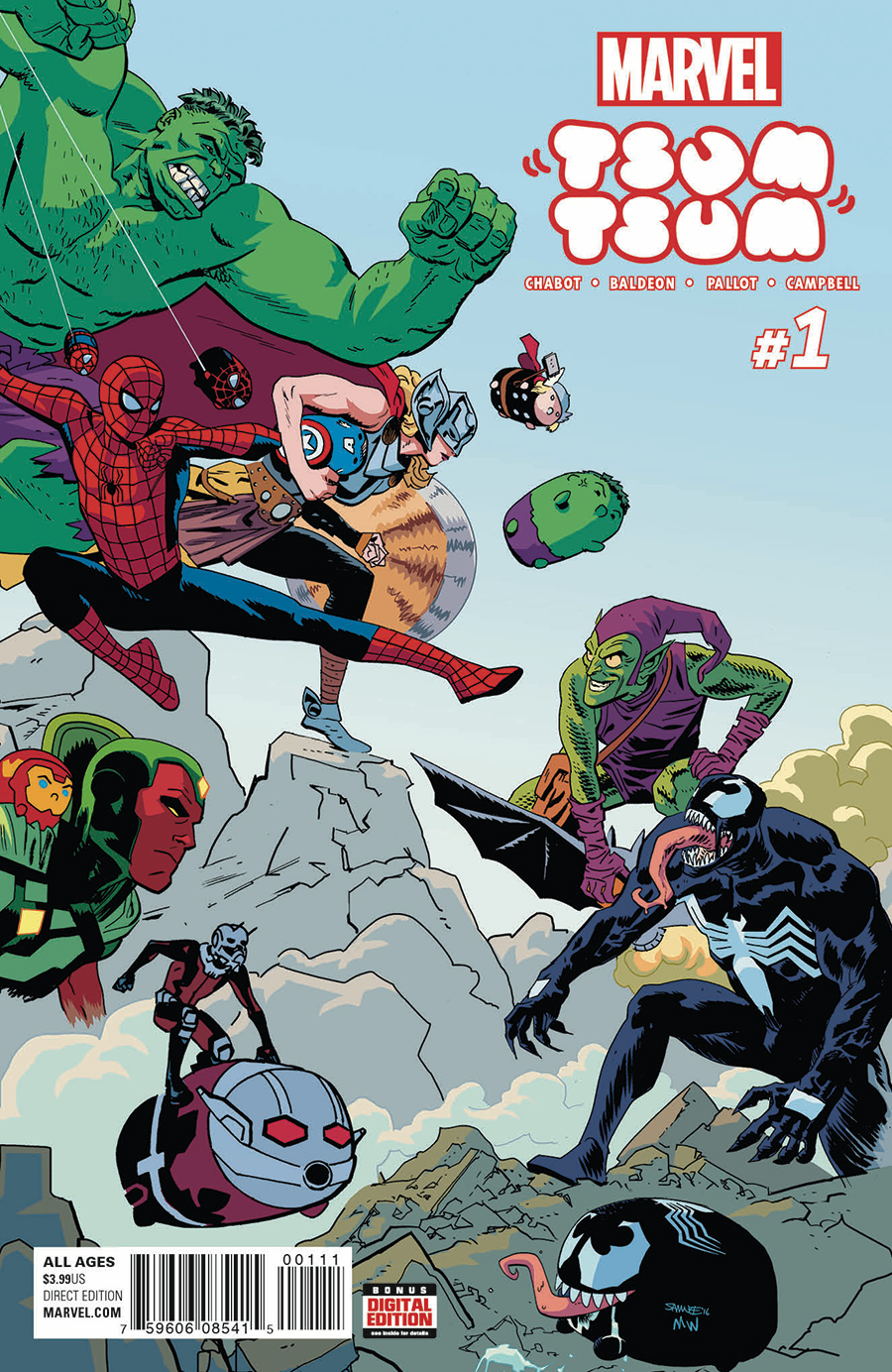 Let’s make this perfectly clear: I loathe comic book tie-ins (or movie or TV tie-ins) which are just designed to sell more merchandise. Product placement is bad enough, but to create a story just for the sake of selling toys is, in my opinion, the lowest of the low. With all of that being said… Okay, I have to admit it, this comic book isn’t bad at all. I’m not saying it’s great, I’m not saying it’s essential, and I’m sticking with my opinion that the idea of making a comic book just to sell toys sits badly with me. Still, these little Tsum Tsums are kind of cute, and more importantly it’s a pretty good read. 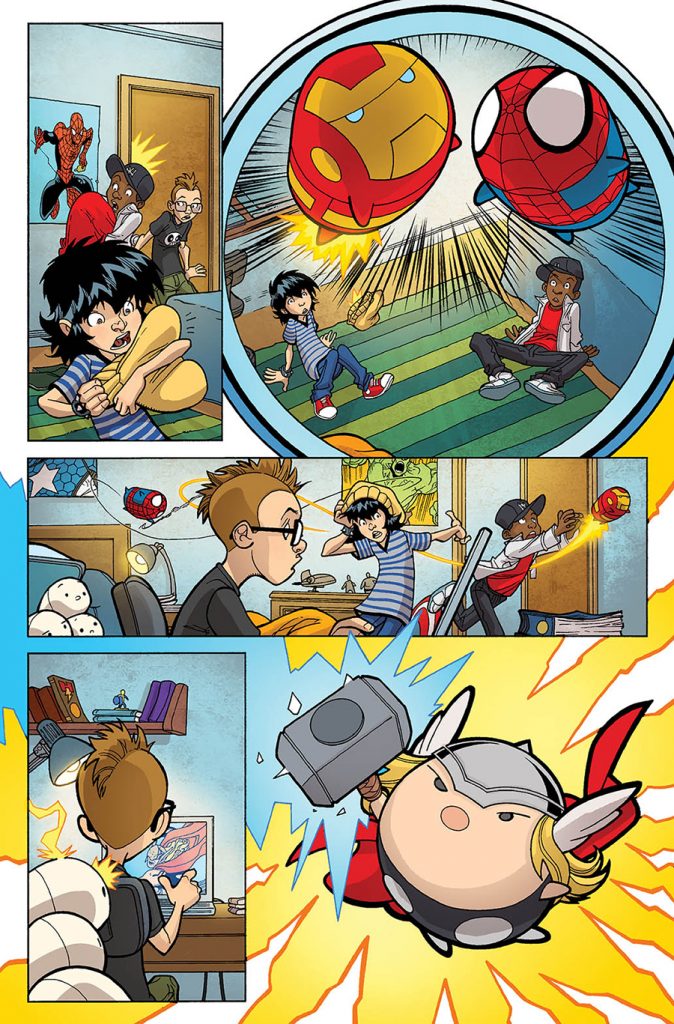 [dropcap]W[/dropcap]hen a Guardians of the Galaxy mission goes a little screwy, a metal delivery crate winds up crashing down to Earth. Down on the surface, young friends Holly Hae, Bert Ergle and Duncan Diggs scramble about trying to take a photo of Iron Man, who’s doing a fly-by past the apartment building where they live. See, they’re all fans of superheroes to varying degrees. When the kids find the steel crate and open it, their lives change forever.

The crate contains Tsum Tsums – strange tube-like creatures. The Tsum Tsums quickly take on the looks and abilities of a variety of Marvel superheroes when the kids and Tsum Tsums see the Avengers battling. The Tsum Tsums don’t mean to cause trouble, but for Holly, Bert and Duncan they’re uncontrollable. Worse, what nobody knows is that C-list villain the Looter lives just a few doors down from them, and he’s got plans…

Tsum Tsum #1 is clearly aimed at a younger audience, yet it’s enjoyable for all. The art conveys a real sense of fun and manages to capture the vibe of the MU in a light and entertaining way. It’s a well-written introduction to the series, and the children come across as natural and with a great rapport. As for the Tsum Tsums… *sigh*… I hate to admit it, but they really are cute. A-hem. Yes, I said it. I’m the last one to buy into the Neon Talking Super Street Bat-Luge merchandising blitz, and I doubt I’ll ever be getting a Tsum Tsum of my own… but at least they’ve made an effort here to come up with a story which doesn’t really come across as pimping out Marvel’s latest soft toy craze. The comic book hold up on its own merits, and some parts are absolutely inspired – such as using a variety of superhero catchphrases and theme songs to calm down these little creatures.

There’s something else, too. They added a letters page. Granted, it was used to explain what these Tsum Tsums are, but… Damn, I wish they brought those back. Letter columns were the best.

So, as tie-ins go, Tsum Tsum #1 really isn’t bad. For that matter, especially for younger readers, this is a whole lot of fun and is worth the read. 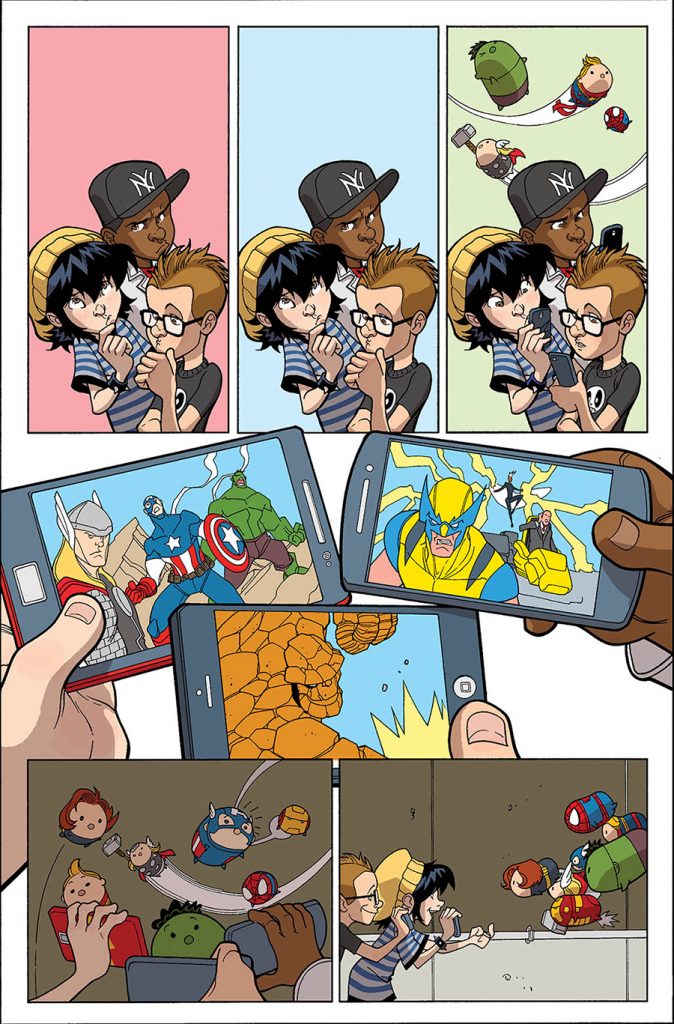