Trigun is one of those rare series that lures you in with playfulness and then sucker-punches you with its genius.

[dropcap]H[/dropcap]is name is Vash the Stampede, and he’s the most dangerous man in a post-apocalyptic world. He’s so dangerous that he’s got a $$60 000 000 000 bounty on his head, and that he leaves a trail of death and destruction wherever he goes. Descriptions of him are vague, just that he wears a long red coat and that he’s a Humanoid Typhoon of devastation. With an eye to minimising the damage that he causes, two employees from the Bernardelli Insurance Society called Meryl Stryfe and Milly Thompson are dispatched to track him down and record his movements. They do find someone matching Vash’s description, but he’s a complete goof who wants nothing more than to eat doughnuts and make bad jokes, and so they dismiss him instantly. But every bounty hunter keen to cash in on Vash don’t share their opinion; In fact, they’re convinced that the goof is the real deal, and pull out all the stops to kill him. Amazingly, the man who may or may not be Vash survives every attack, without killing anyone in the process. Whatever death and destruction caused is instead caused by the bounty hunters themselves. Meryl still refuses to believe this man is Vash, although Milly becomes open to the possibility.

As time moves on, their paths overlap repeatedly, and every time this lovable oaf seems to get through every dangerous encounter unharmed. But could he really be Vash? Can it be that his amazing ability to dodge bullets isn’t just a lucky fluke, as he keeps maintaining? Is his reputation even justified? Right from the beginning the audience believes that he really is Vash the Stampede, and within a few episodes we’re obviously proven right. It turns out he’s every bit as good – and dangerous – as the stories say… except he prefers to spread a message of peace and love. He’s also got amnesia, and doesn’t even know if the stories of how he destroyed the city of July are real, and that’s what makes him so fascinating. His light-hearted persona and antics are a shield for his serious, melancholy nature.

As he travels on his journey to uncover the truth about himself, he’s joined at times by gunfighting priest Nicholas D. Wolfwood. Wolfwood spreads the Good Word with a large wooden cross on his back that houses his arsenal of weaponry. The two men engage in constant debates over morality, religion and human nature, and their discussions are a sharp contrast to their adventurous actions. As Vash tries to unravel the mystery of his past, he also evolves as a person, with everyone he encounters and every situation he finds himself in shaping his very existence. The action in Trigun is explosive, with gunfights that combine the best of a Sergio Leone Western and a John Woo action film. The characters are engaging, and while the story starts out all fun and games, it becomes darker as the series progresses and the nature of Vash is revealed. It’s this steady change that makes you realise that you were suckered in at first, just as Meryl and Milly were, but you’re glad for it. The dialogue suits every scene, and some of the conversations between Vash and Wolfwood are highly philosophical, but it’s the poetic narrative pieces at the end of each episode which make you realise the true intelligence and depth of the story.

Trigun is action-packed, thought-provoking, always fascinating. The world it’s set in is reminiscent of the landscape from Stephen King’s Dark Tower series, and the animation is wonderfully cartoonish at first, with super-D expressions and a simple style. Yet the minute Vash switches from merry goof to merciless maniac, the art changes accordingly and becomes harder-edged and brutal. It’s a change which grabs your attention every time, and never fails to impress. Combining a tight storyline, fantastic dialogue and memorable characters, Trigun is without doubt one of the best anime creations ever. 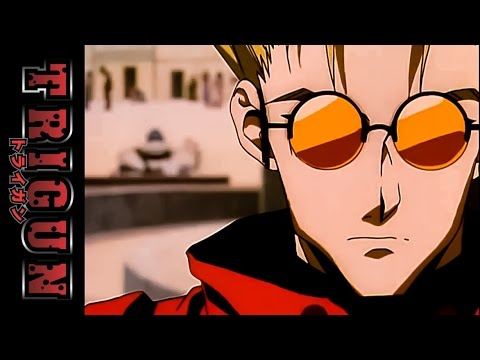