Right from the start, Trackmania Turbo will get your adrenaline pumping with its insane tracks packed with loops, drops, twists, turns and high-speed jumps. Every track is designed to not only be fun and exhilarating to play but just challenging enough to make winning a gold medal feel rewarding.

There are 200 of these tracks in four different areas. Each of these areas has its own car to master, Canyon with its stock-inspired car is all about learning the finer points of drifting, the Stadium track with an F1 style speedster offers high-speed races while Lagoon with a Dakar-style rally buggy and Dirt Valley with its beetle-like rally car lies somewhere in-between.

Each vehicle drives a little different and suits the style of track and terrain of each location. These tracks slowly ease the player into all the mechanics and teach them how to handle each obstacle that the game throws at them. Although these mechanics are easy to grasp they can be hard to master, especially if you want to win those elusive gold medals, it helps then that players are able to quickly restart a race with the press of a button, and believe me you will be doing this a lot in the later stages of the game, as the difficulty ramps up pretty quickly. Each of these tracks has a Bronze, Silver and Gold medal to win and players need to win at least one of them in order to continue to the next track.

It is not just the twist, turns and jumps that are dangerous; the game also changes the racing surface of some of the tracks, which forces players to think on their toes, making sure that you never quite feel like you have mastered the mechanics fully.
I am not a huge racing fan, but I found myself becoming addicted to the arcade racing mechanics and the need to beat my previous times. Trackmania Turbo is truly easy to pick up and play, but as I learned early on it can be hard to master. I especially found that unlocking new tracks, when you have to win a set amount of gold medals, becoming quite difficult to achieve.

Each medal you win not only unlocks the next track but also unlocks new skins and paint jobs for your cars. Getting to customize your vehicle lets you stand out when facing opponents online. By earning medals and race positions online players will start to increase their overall world ranking, these rankings can be shown based on your current location.

Playing with a friend is where Trackmania Turbo shines, multiplayer can be played both online and offline split-screen. Keeping this in mind Trackmania Turbo has a track editor which allows you to create your own crazy and exciting tracks on which to challenge your friends. Using the track editor can be as difficult as you want it to be, as there is a beginner-friendly designer as well as a more advanced designer option. Not feeling up to designing your own course, then let the game generate a course for you, all you have to do is change a few options and the game builds the course. It’s quite quick and makes getting a course build as easy as falling off the track.

Trackmania Turbo has a way of awakening the competitive side in everyone, be it facing opponents on or offline, or trying to beat your own time on one of the campaign tracks. Sure I sometimes found myself getting frustrated, but I would always return to race some more. It’s easy to pick up yet hard to completely master and will consume your time as you keep chasing better and better times.

Trackmania Turbo is a joy to play, beautiful to watch and delivers on its high-octane promises. So get your friends together and get ready for some high-speed competitive fun. 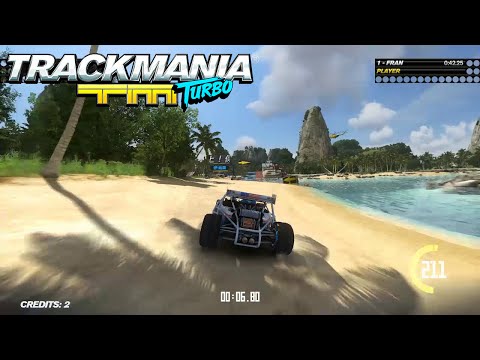