I have always had a great appreciation for tabletop gaming. One game, in particular, has always caught my eye; Warhammer. [dropcap]I[/dropcap] was mostly intrigued by the amount of lore and history behind the Warhammer game, so much so that I bought the rulebooks, even though I had never fielded an army. The reason for never truly getting into the hobby was mainly due to all the gluing and painting that was involved. It seemed just a little too much work for me.

[pullquote]The Total War series of games have always been about building up large armies and fielding them against your opponent in order to see who flees or dies first, and Total War: Warhammer is no different.[/pullquote]

Luckily, with the release of Total War: Warhammer, the team at Creative Assembly has made it possible for me to experience the thrill of pitting two unique Warhammer armies against each other without putting in all the work. The Total War franchise has always had a special place in my heart as it was one of the first games that drew me back to PC gaming after a long stint as a console only gamer.

The Total War series of games have always been about building up large armies and fielding them against your opponent in order to see who flees or dies first, and Total War: Warhammer is no different. You get to choose between one of four races (with more on the way), the war hungry Orks, the regal Empire, the stout Dwarfs and the scary as hell Vampire counts. Each army has their own unique units and feels vastly different from the other.

The Empire should seem the most familiar to Total War veterans, that is until you gain access to their heavy-hitting Empire wizards. The Dwarfs although slow and lacking any fast cavalry units make up for this with powerful artillery units that fire volleys of iron and even spews streams of fire. The Vampire counts and Orks are the most unique of the four races. Orks tend to rely on their brute strength and overwhelming numbers, and because of a lack of intelligence, they do tend to fight each other rather than the enemy. Building up each unit’s fitness value will help them perform better in battle while keeping them from killing each other. The Vampire counts are the most unique not only because of the weird units they have available but also in how they conquer new provinces. Vampire Counts need their corruption to spread in order to invade adjacent provinces. This means that trying storm in with your armies without planning ahead would surely mean defeat. Seeing the environment slowly change after you have corrupted it makes all that planning seem worth it. Once again the gameplay is divided into two sections, the strategic campaign map, and real-time battles. War is not only about fielding the largest army (although that helps), but also about planning, gaining more income, growing your population and building the relevant buildings in order to expand your empire. All this planning is done on the strategic campaign map, where you are able to move your armies, take part in diplomatic relations and engage in some subterfuge. The choices you make can and will impact your chances for victory. Some of these choices can be difficult to make as there were instances where I had to make alliances with my arch rivals in order to protect my borders from a more powerful threat, all the while sneakily destroying some of their infrastructures. This weakened them just enough for when I would inevitably stab them in the back. [pullquote]The real-time battles are without a doubt where most of the fun is to be had in Total War: Warhammer.[/pullquote]

Planning can only take you so far and to be truly victorious one needs to get their hands/claws/tentacles dirty. Each army in Total War: Warhammer is lead by a fearless Lord, who you can upgrade throughout the game in order to increase their attributes and give them access to new abilities. Some of these Lords are even able to gain mounts to ride into battle. There are few things as awe-inspiring as seeing your powerful Lord charging into battle ahead of his army and slamming into the opposing forces.

The real-time battles are without a doubt where most of the fun is to be had in Total War: Warhammer. Seeing your army clash head on with the enemy on both the ground and in the air is thrilling and exhilarating at the same time. I found that I was able to defeat enemy armies that I had trouble with previously just by taking note of the terrain and planning accordingly. Swamps, for instance, slow down the movement and fighting speed of small units and firing arrows from atop a hill greatly increases their range. Narrowly winning a battle that statistically you shouldn’t have been able to, yet because of your planning and execution you were able to beat the odds is just so rewarding. [pullquote]Total War: Warhammer stands head and shoulders above its predecessors.[/pullquote]

Total War: Warhammer is one of the best looking and sounding Total War games to date. It’s when zooming right into the middle of the battle that you realize just how detailed and varied these units are. From the weighted manner in which an Ork swings his heavy ax to the way the Demigryph knights charge into battle and even seeing a dragon circling the battlefield, it’s in these moments that you realize the scale and spectacle of these encounters. Hearing a regiment of Empire swordsman scream as they charge forward into an oncoming unit of brutish Orks, and finally hearing the sound of the impact as they collide, just cements how great sound design in the game is.

Total War: Warhammer stands head and shoulders above its predecessors. Each aspect of the game has been vastly improved, from the great sound and art design to the fantastic units and environments, even the overall mechanics as been tweaked to great effect. It will be difficult returning to run of the mill archers and knights after fielding armies of giant spiders and vampire bats. Special mention has to be made of the inclusion of the rich and deep lore of the Warhammer universe. The effort that Creative Assembly took to include as much of it in the game as possible really pays off in the end and makes the game feel grounded in the Warhammer universe. There are few things as exciting as finding yourself in the midst of two large fantasy armies clashing on the battlefield, and there are few developers who are able to make such battles work and feel wondrous. Creative Assembly has once again proven that they are some of the best when it comes to mixing strategic gameplay with real-time battles. Total War games have always been about the balance between tactics, strategy and engaging gameplay. Total War: Warhammer succeeds in all of these. If you want to experience large scale fantasy battles at its finest you will be hard pressed to find a better experience than Total War: Warhammer. 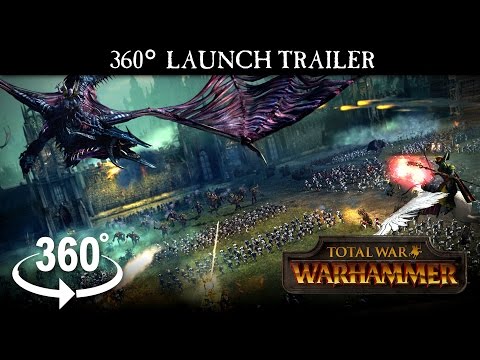