The term smartwatch is something that’s thrown around quite liberally these days, which includes the likes of smartband, and the likes. In addition, there is often a disparity between smartwatches, often falling into one of two categories, that of a fitness devices, or that of a lifestyle device. While the former allows you more freedom to track, monitor and present your daily workout routines, the latter takes care of the business side of things, such as emails and notifications.

More often than not, smartwatch development is left to the likes of smartphone OEMs, who are in a much better position to integrate their product to their own devices, as well as other manufacturers’. This leaves the fitness device market open to many other manufacturers, despite OEMs attempting to stranglehold this space as well. TomTom has long been operating in this space, with even a few collaborations with sports brands such as Nike. The TomTom Runner Cardio follows on from the previously released TomTom Runner, with the addition of a heart-rate monitor. The Runner Cardio, or RC for short, certainly fits the bill of a rugged sports watch. Unlike many of the other smartwatches with straps of leather, metal or plastic, the RC has a fully rubber strap, which houses the inner watch in place. While the rubber finish does mean that the strap is a lot more comfortable and flexible, especially during a run, it is, at the same time, quite a lot thicker than your average strap. While the RC is suited quite well to use during physical activity, it becomes slightly overbearing during the course of the day, for which I would time-to-time remove the watch from my wrist. The addition of the four-button control on the wristband doesn’t help the comfort, Compared against the Runner with its detachable GPS, the RC is a lot more comfortable.

This inner watch is made up of the GPS and 1” display. The display has a 144x168px resolution with monochrome colours. While it may seem primitive, the outcome is a lot more positive, in that it displays quite brightly, making it easier to glance at while running without needing a second look to make sure. If you wish to brighten up the screen even further, you can swipe your finger across the screen to activate the backlight. The RC is also certified waterproof, with depths of up to 50m or 5 ATM.

As already mentioned above, the RC has a built-in GPS sensor, which tracks your runs by means of satellite navigation. In addition, the RC uses TomTom’s QuickGPS technology, which allows it to pick up your location faster than simply connecting to the GPS satellites, and also improves tracking in between taller buildings in CBDs. QuickGPS is also aided with connectivity to your smartphone, using its location by network cells or Wi-Fi. Users can also track their heart-rate during their runs, with this feature kicking in to monitor even before you press the start button to go.

Other tracking options include a motion sensor (accelerometer), which acts as a pedometer, as well as a compass to determine the direction. There is an option to run on a treadmill instead of out in the open that allows you to go running without the need for using the GPS. And this is where the motion sensor kicks in the most. Unfortunately, however, it isn’t always as plain sailing as that, with results varying quite substantially when only tracking your steps and distance by means of the pedometer. It is often anywhere between 10 and 30% out as to how many steps you’d expect to have taken.

Software features include a stopwatch, which should be a given, but often missing from a few fitness smartwatches. There are also a few different modes to choose from when going running apart from the most basic of options. One such mode is the training option, which then allows you to track your performance against goals (distance, time and calories), intervals (warmup, work, rest, sets, cooldown), laps (distance, time, manual), zones (pace, speed, heart rate), and race, which allows you to race against specific times and distances, or even your previous runs. There is also the option to setup the HUD as to what metrics are displayed during your run.

The heart rate monitor does a very good job. Even when compared against other heart rate monitors, such as standalone or those on your smartphone, it is almost always identical to what you’d expect. For those who typically run with chest strap monitors for better accuracy, rest assured that the RC does this job a whole lot better now than it previously did, allowing those users to rid themselves of those uncomfortable straps.

To round things off, it’s important to discuss a few lacking features on the RC. For starters, while the unit is waterproof of up to 50m, it’s almost an entirely useless feature in that the software is restricted to tracking only your running activity. Given that the unit has a built-in accelerometer, the feature could still be added at a later stage, keeping in mind that the TomTom Multi-sport Cardio covers these activities at a slightly higher premium. I’m also not sold on the idea that the watch requires a charge every day eight to ten hours, this at its most optimum usage. If you’re planning a Comrades Marathon for example, and not one of those to beat the eight-hour mark, the watch might just die on you during the day. And this is not acceptable given its overall lack of additional functionality. And even when you’re not using the GPS or heart rate monitor, you can only expect an additional two hours of battery life. 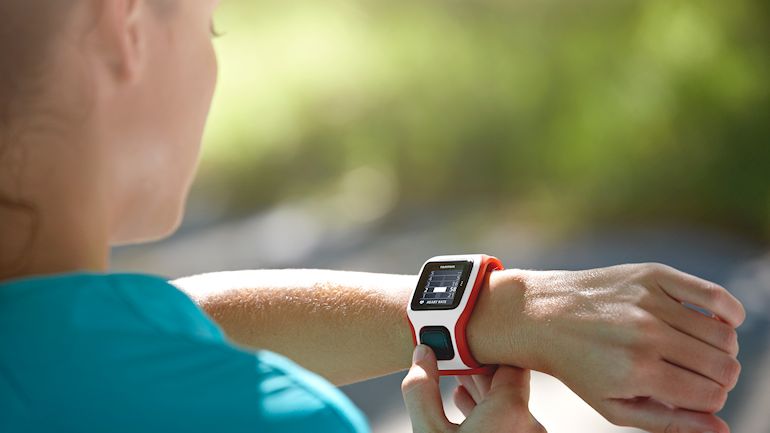 The TomTom Runner Cardio carries an RRP of R3,139, and this is quite high. Considering all that the unit has available, it lies on the border of worth it, and pricey. When compared to the R1,699 TomTom Runner, it’s almost double the price, with only the heart rate monitor and built-in GPS added (the Runner has a detachable GPS). There is a further option of the Runner with an included heart rate monitor strap, at R2,299. The pricing, then, is a bit muddled, with the only question being whether users will choose comfort over price.

That said, the Runner Cardio does its job quite well overall, with only the omissions from the feature list being a concern. What’s already there, though, works well for the most part.