Titans Annual #1 Review – Shows What Makes The Titans So Special 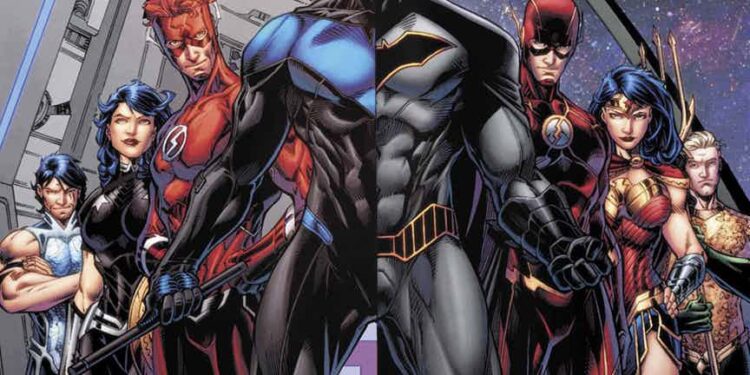 In Titans Annual #1, eight members of the Titans and the Justice League – four from each team – arrive in a mysterious tunnelled maze. For some, it’s a reunion, like the two men who share the name of the Flash, Barry Allen and Wally West. For Aquaman and Tempest, it’s a return to the old status quo of Lord and Servant. For Batman and Nightwing it’s a matter of dominance. And for Wonder Woman and Donna Troy, it’s about trust – or the absolute lack of it. With Wonder Woman and Batman so paranoid that there’s almost no teamwork whatsoever, the differences between the two teams and their members are laid bare. Even the constant assaults by duplicates of their foes can only bring about temporary alliances. But who is behind their imprisonment, and can it be true that one of them may be a traitor in their midst?

There’s been much hype leading into this of some more clues regarding the upcoming “button” mystery and Wally’s reappearance which brought about DC’s Rebirth. If that’s what you’re looking for, prepare to be disappointed. Instead, what you’ve got here is a slow-burn mystery which takes the time to explore the character dynamics of both the individuals and the teams they’re in.

Which means, unsurprisingly, that Batman and his fellow Justice Leaguers come across as complete jerks in Titans Annual #1. Well, except for Barry, who comes across as a bit of a wimp. One thing which has always separated the Titans from the other teams is that they’re so close that they’re like a family. They may have started out as teenage sidekicks, but they matured as a team and that bond is something which the Justice League can neither understand nor imitate. That’s the strength of the Titans, and for Wally to be treated as little more than a sidekick once again by Batman while Tempest is ordered around like a lackey by Aquaman, it speaks volumes.

Of course, it’s our absolute faith in them as the Titans of old whom we all know and love is something which is toyed with here in the writing. It’s hard to think of any of these heroes as possibly being a traitor, but even if it’s true then it seems even less possible that it could be one of the Titans. Which means, for anyone trying to second-guess the creative team here, that it also makes one of them the obvious choice. It’s that sort of overthinking which made the poison cup routine in Princess Bride so classic, and all you can logically do is sit back and enjoy the ride.

Titans Annual #1 doesn’t quite live up to being worthy of an annual. Fans should expect something truly special from them. However, if viewed as a regular issue, it’s a solid read with great art and once again shows what makes the Titans so special.