You’ve got to feel sorry for Linda Park. In another reality, a better one, she was happily married to Wally West – one of the people to have held the mantle of the Flash. In this current reality, however, she’s only just met him and he hasn’t exactly made the best of impressions on her. First he tries telling her how she’s his soulmate, and then she gets kidnapped by the time-travelling techno-wizard called Kadabra for no reason which makes sense to her. Not only is she oblivious to what’s happening, but the hospitality of Kadabra and his doppelganger team of original Titans leaves a lot to be desired.

Meanwhile, Wally and his friends – the REAL Titans – start to blame themselves for what’s happening. Trying to track down Kadabra and rescue Linda, they’re presented with three options. Despite knowing that they’ll be walking into Kadabra’s traps, they have little choice but to split up and investigate. But what they don’t know is that Kadabra has enhanced the doppelgangers so that they’re more than a match for our heroes… 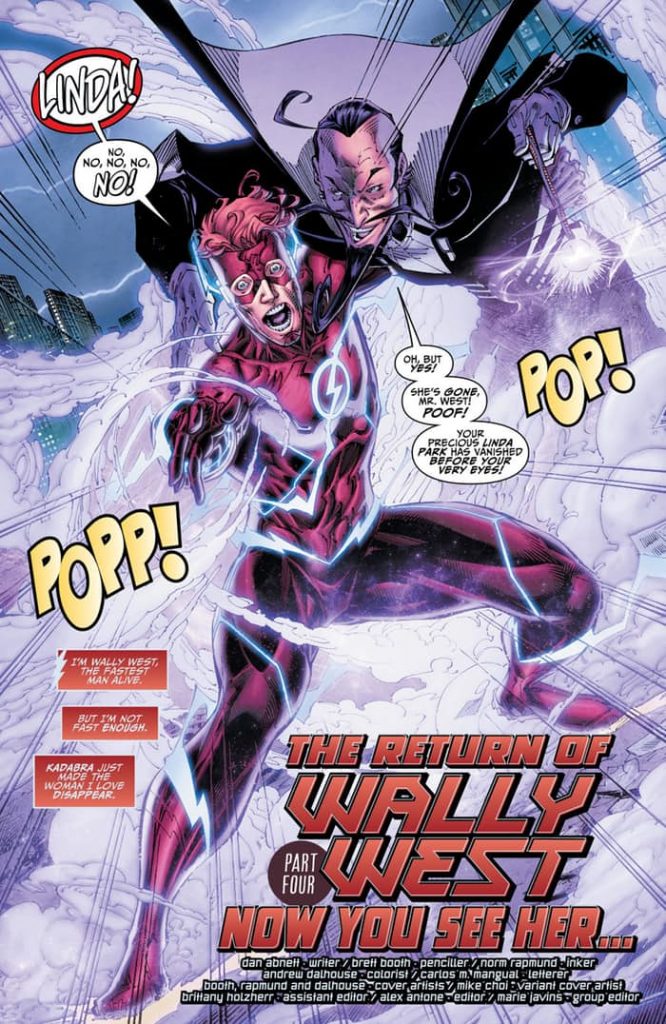 Long-time readers will be acutely aware of the old let’s-split-up-and-investigate routine in comic books. Over the years it’s provided fans with some great moments and interesting team-ups, offering unusual duos with fascinating character dynamics. Plus it’s a great way to eliminate the often-cluttered group scenes. It may be a cliché, but it still works. In fact, not only does it work but it’s one of those moments where some readers might wonder if there’s even more to it than that. Is it another sign of longing for the DCU to be the way it used to be?

Once again the writing and the art are both impressive, from chunky exposition to heartfelt dialogue and from personal moments to exciting action sequences. Simply put, this is every bit the Titans comic that the fans could want, hitting every beat correctly and standing on equal footing with any of the best Titans comics over the years, and plenty of Flash ones too. And as much as this IS a Titans comic book, so far this really is like a new Flash series too.

So what’s the problem then? Why is this being rated a bit lower this time? Honestly, it’s a little hard to say. Maybe it’s that Kadabra isn’t coming across as all that strong a villain. Sure, he’s a classic, and suitably melodramatic too, but he’s losing steam. Maybe it’s how he has to have a team of doppelgangers do his dirty work? Maybe it’s because he had to enhance them, something he maybe should have done before they got beaten the first time? Maybe it’s because the team-up dynamics weren’t at their best? Maybe it’s because, once again, it’s current Titans vs. doppelganger old Titans and we’ve seen that already?

Or maybe it’s just that this storyline is dragging a little now and should be wrapped up?

Whatever it is, it’s a slight step down. Don’t get me wrong though, this is still one of the better titles from DC out there. If you’re after a solid read with a pre-New52 vibe then Titans #4 is definitely a must.