Man has been fascinated with the possibilities of time-travel for centuries. We’ve been intrigued by how time and history could be altered. NBC’s new action-adventure series Timeless puts an interesting twist on the time-travel genre that feels familiar and new. The series takes the idea of altering history and mixes it up with crime solving and conspiracy theories to end up with something that can be equal parts brilliant and silly.

The pilot episode for Timeless opens up quite literary with a bang. Former NSA operative and wanted man Garcia Flynn (Goran Visnjic) blasts his way into a compound owned by Mason Industries in order to “acquire” their newly developed time machine. The reasons behind Flynn stealing the time machine isn’t immediately clear. All we know is that he wants to change time in ways that will inevitably turn out bad.

In order to stop Flynn from altering the timeline and destroying history as we know it, Homeland Security is forced to put together an unlikely team to chase after him in the original prototype time machine. The team consists of a historian Lucy Preston (Abigail Spencer), dashing special forces soldier Wyatt Logan (Matt Lanter) and idealistic scientist and the time machine’s pilot Rufus Carlin (Malcolm Barrett). The team has to capture or eliminate Flynn before he does irreparable damage to their timeline. Each episode has the team trying to figure out what Flynn’s plans are and how he wants to alter history. Now as with most shows centred around time-travel, there were moments when I was asking myself why the team didn’t just do this or that. The answer to most of these questions would unavoidably turn out to be that it would create a paradox. Although certain “rules” regarding time-travel are put forward, for instance, you can never go back to a time you’ve been to before, there were moments where I just couldn’t understand the choices the team made.

Luckily, the intricacies of time-travel itself and the myriad of rules that comes with it mostly take a back seat to the heroes experiences during their jumps to various time periods. It’s seeing how these characters react in these situations that make the series work. Each of our heroes carries their own ideals and morals. How these make them react in a time period that might not follow the same morals or ideals is where the series truly shines. Being black, Rufus has to continually face prejudice. “I am black, there’s literally no place in American history that would be awesome for me”, he mutters in one episode. Seeing Rufus react to these moments and the inner conflict and growth he experiences made him feel like a fleshed out character. There is an episode where Rufus is faced with a choice, preserve history or possibly make the future a better place for African Americans by either saving President Lincoln’s life or letting history take its course. It’s thoughtful moments like these that make up the shows more serious elements.

On the other hand, Lucy’s love and respect for history and historical characters is almost infectious. It’s quite entertaining seeing her react to meeting historical figures that she has been studying her whole life. Her respect for history does mean that she would do almost anything to ensure that history as we know it remains intact. It’s this constant battle with keeping history intact and doing what seems right that elevates her character from being just another “smart” and “spunky” female character to one with more depth.

The characters of Flynn and Wyatt tend to have a lot more in common than we first realise. Both are haunted by the ghosts of their past. Seeing how each one deals with this not only gives us more insight into what drives each of them but also slowly begins to reveal the reasons behind why Flynn wants to alter history. I mostly enjoyed each character as they reacted in a way that came across as real, or as real as they can in a show about time-travelling. What I did appreciate was that instead of just preaching the dangers of altering history, the show illustrates this by having the characters actions actually affect their future. The prospect of the heroes actions affecting their future lives when they returned creates a welcome tension in the show.

There were times where the witty dialogue resulted in some moments of eye-rolling but, for the most part, the jokes and comments, especially between Rufus and Wyatt, hit their mark. However, I did find the sexual tension and flirting between Wyatt and Lucy to come across awkward and forced at times.

Timeless is a mixture of silliness and seriousness sprinkled with a dash of conspiracy for good measure that should not work but does. Its ridiculous premise is made more plausible by the beautiful historical sets and an interesting, yet familiar, story. Timeless is a fun romp through time, and although it might not change history as we know it, it has caught my attention. 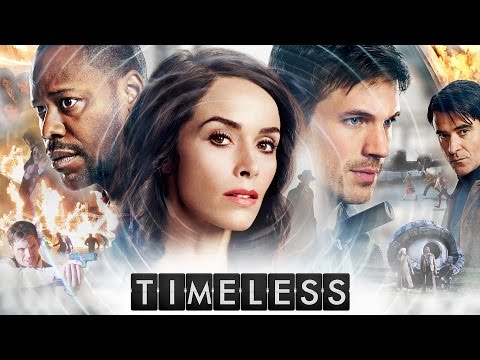