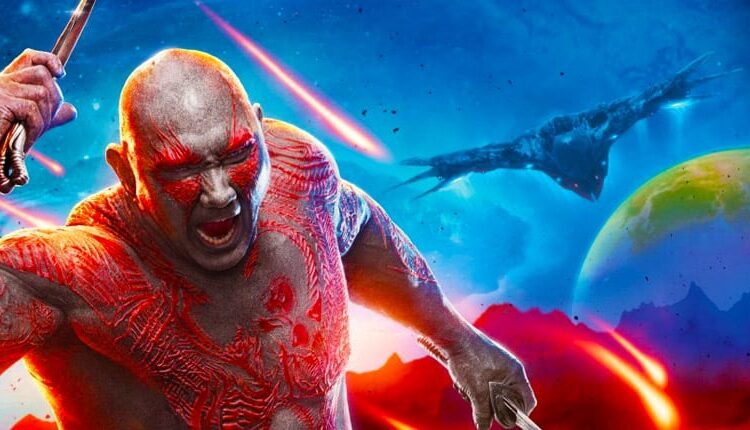 Thor: Ragnarok has been making waves at the box office and is receiving high praise from critics. It’s a film full of action, comedy… and the usual amount of Easter eggs for eagle-eyed fans to spot. There’s also plenty for fans of the MCU to speculate on, from the (apparently) fake Infinity Gauntlet in Odin’s treasure room and whether Loki stole the Cosmic Cube again, to figuring out the finer details of how the Hulk arrived on Sakaar in the first place. Fan theories are already flying around, but there’s one which nobody seems to have picked up on yet: Was “Doug” really Drax the Destroyer?

Doug, as mentioned by rock warrior Korg in one of the film’s recurring jokes, was a slave who entered Grandmaster’s gladiatorial arena only to be killed by the reigning champion, the Hulk. Doug, wearing a helmet and slumped against a wall, appears to be dead. Korg compares Thor’s hopeless position to that of Doug, simply referring to the god of thunder as “New Doug”. It’s a funny joke, but could there be more to Doug’s identity than meets the eye? “Doug” is certainly a rather human-sounding name, and seems strangely out of place on the alien world of Sakaar. The audience never gets a really good look at Doug either, and it’s enough to raise a few questions about his identity. But why Drax? Little is known of Drax from the Guardians of the Galaxy films, his on-screen origin being left vague. All that’s explained is that he’s from a world of “primitives” (or at least that’s how the rest of the universe sees them) and that his wife Hovat and daughter Kamaria were killed by Ronan the Accuser (acting on Thanos’s behalf), which started him on his path of vengeance. It’s a simple background story for a seemingly simple character.

Except, the comic book origin of Drax is a bit more complex. Originally he was a human being on Earth (one of those “primitive” planets in the eyes of the rest of the universe). His real human name was Arthur… Douglas. He, along with his wife Yvette and their daughter, was killed by Thanos. However, Douglas’s soul was placed into an artificially created body, and he became Drax the Destroyer. His memories of his old human life were almost entirely wiped out, essentially making Douglas a new person. In their place was planted an obsessive mission of vengeance for Drax to kill Thanos with only vague motivation, yet he would do whatever it took to achieve that goal. One of the things Drax did to achieve that goal, at least as shown in the Guardians of the Galaxy animated series, was to become a gladiator in an arena that looks curiously similar to the one on Sakaar. In doing so, he keeps his identity secret by donning a helmet and armour, and uses an assumed name. But why would Drax even become a gladiator? Because the arena’s champion is awarded the opportunity to serve Ronan the Accuser. For Drax it’s an incredibly savvy move which would bring him one step closer to his target Thanos, using Ronan as a stepping stone. Likewise, the Guardians in that animated series have also done work for Grandmaster’s brother The Collector, while another episode had Drax battle Gamora in Grandmaster’s Conjunction arena.

It’s true that the comic books and the animated GotG show aren’t canon to the films in the MCU. However, it’s worth noting that Douglas/Drax wouldn’t be too out of place in the Grandmaster’s gladiatorial games since that idea has been used in other mediums. If Drax were trying to keep a low profile, it’s possible he could have dredged the name of “Douglas” as an alias from his hazy memories of his former human life, much as his wife’s name Hovat may be the best he can remember of his human wife Yvette.

Also, since we know that only the best warriors (better than Korg, anyway) were chosen to face Grandmaster’s champion, “Doug” must have been considered quite a fighter to put on a good show against the Hulk. Drax certainly fits the bill in that regard. Yet even if Drax was Doug in the MCU and did fight the Hulk, what about Korg’s claims that “Doug” died? We certainly see a body propped up against the wall, and he looks pretty dead to us for the few seconds he’s on screen. And wouldn’t it also contradict the (already muddled) MCU timeline since the Hulk has only been on Sakaar for two years, while Drax has been busy with the Guardians?

Why do we assume that Doug was dead? Because Korg said so? It’s hard to know what to believe with Korg, since he also mistakenly believes that he’s accidentally killed Miek at the end of the film, and he’s definitely wrong about that. Korg may be a kind-hearted warrior full of good intentions, but he’s not exactly the sharpest guy around and has no understanding of how the Grandmaster runs things.

By rights, either Thor or the Hulk should have died in their epic duel. That’s what Korg says, that it’s a fight to the death. But the Grandmaster interferes in their fight both heroes live, instantly making Korg wrong on that account. Grandmaster, always trying to put on the best show, wants to keep them both alive since they’re both crowd-pleasers, and hype up an even more spectacular rematch between them. Fights to the death may be what the crowd wants, but since champions are hard to find it makes sense to keep them both around for more matches. If “Doug” were Drax, he could have suffered the same fate and lost the fight… but still have survived, just like Thor. To Korg it might seem like Drax/Doug died, but why would Grandmaster keep corpses in the same room with his gladiators anyway? The place would have corpses piled everywhere. There may be a couple, but a more likely theory is that many of the bodies lying around are unconscious or healing up before their next fight, and Korg sometimes can’t tell the difference – much like with Miek.

As for the time scale, we know that the Guardians of the Galaxy films take place well before the events of Thor: Ragnarok, and we have no idea what Star-Lord’s team may have been doing between Vol. 2 and Infinity War. Also, given Grandmaster’s statement that time on Sakaar is a little wonky, the time frame isn’t really an issue at all.

It’s likely that “Doug” may have just been some above-average person from an alien world who just happened to have a human-sounding name, and may indeed be dead. It might just be a throwaway joke, and it wouldn’t be the only one in Thor: Ragnarok. But the “Doug is Drax” theory still ticks enough of the right boxes to be possible. If only we’d gotten a better look at him…