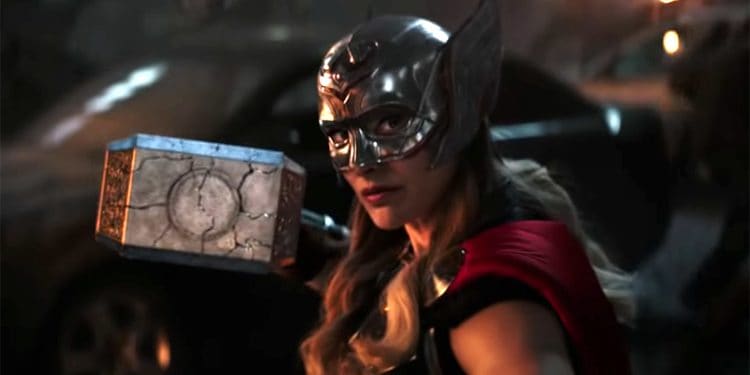 You might need to sit down for this. Marvel Studios has brought the thunder with the first trailer for the upcoming Thor: Love and Thunder ahead of its release on July 8. The new teaser shows off footage of Natalie Portman’s character, Jane Foster, in her new role as the female superheroine Mighty Thor.

After a mighty long wait, we finally get to see what Chris Hemsworth’s God of Thunder has been up to since the events of Avengers: Endgame. In the Thor: Love and Thunder trailer footage (which probably holds the record for the shortest window between a first trailer being released and the film’s release date), we see Thor briefly joining the Guardians of the Galaxy, similarly to how he buddied up with Hulk in the previous film, before setting off on his own journey. It seems like this god is tired of fighting wars and, now that he is free from responsibility, he is ready to explore the depths of space — and enjoy himself, of course.

There doesn’t seem to be any signs of any multiverse storyline here, but Thor does come in contact with Jane Foster’s Lady Thor at the end of the trailer.

It’s probably also important to point out that the Marvel God has shed all the weight and put in some serious training to get back into shape — as shown in the Thor: Love and Thunder trailer.

The film finds Thor (Chris Hemsworth) on a journey unlike anything he’s ever faced – a quest for inner peace. But his retirement is interrupted by a galactic killer known as Gorr the God Butcher (Christian Bale), who seeks the extinction of the gods. To combat the threat, Thor enlists the help of King Valkyrie (Tessa Thompson), Korg (Taika Waititi) and ex-girlfriend Jane Foster (Natalie Portman), who – to Thor’s surprise – inexplicably wields his magical hammer, Mjolnir, as the Mighty Thor. Together, they embark upon a harrowing cosmic adventure to uncover the mystery of the God Butcher’s vengeance and stop him before it’s too late.

The film also includes Tessa Thompson’s Valkyrie, Chris Pratt’s Star-Lord, Dave Bautista as Drax and Vin Diesel as the voice of Groot — along with the arrival of Christian Bale as villain Gorr the God Butcher.

In the past, director Taika Waititi has teased that Thor: Love and Thunder “is so insane and also very romantic.” During a recent interview, the director confessed that it’s “the craziest film” he’s ever done.

“Well, just between [me and] you and the readers, I’ve done some crazy sh*t in my life. I’ve lived, like, ten lifetimes. But it’s the craziest film I’ve ever done,” Waititi shared. “If you wrote down all the elements of this film, it shouldn’t make sense,” he added, “It’s almost like it shouldn’t be made. If you walked into a room and said, ‘I want this and this and this.’ Who’s in it? These people. What are you going to call it? Love And Thunder. I mean, you’d never work again. Maybe I won’t after this.”

Well, that certainly says a lot. Let’s hope that Thor: Love and Thunder turns out just as fun as the trailer promises it will be.

Directed by Waititi (Thor: Ragnarok) and produced by Kevin Feige and Brad Winderbaum, Thor: Love and Thunder opens in theatres on July 8, 2022.

What are your thoughts on the Thor: Love and Thunder trailer?