The Vault is a strange genre hybrid that merges the bank robbery flick with a haunted house movie, think Inside Man meets Poltergeist. Desperate to help their brother pay his mounting debts, two estranged sisters (Taryn Manning and Francesca Eastwood) hatch a ridiculously stupid plan to rob a bank in broad daylight. When they discover that there isn’t enough money in the safe, the bickering gang members agree to try the vault in the basement as suggested by the assistant manager (James Franco). Everything here plays out in typical B-movie precision. However, as they descend into the ghoul-infested basement, the film switches genres and takes a leftfield turn into the supernatural. Of course, mayhem ensues. Once that happens, we are fed the usual campy slasher with murky monsters lurking in the dark.

Strangely, there aren’t any heroes here worth rooting for. Neither are there any deaths worth cheering about. The film attempts to blur the line between the victims and the perpetrators, but it just doesn’t work. The good guys and the bad guys are equally unlikeable. Also, it’s never scary enough or tense enough to be effective either.

It truly is an intriguing idea, but the two genres don’t fuse together seamlessly. Perhaps a different director could have made this work better, but in the hands of Dan Bush, The Vault feels uneven and generic. There is a pinch of originality sprinkled here and there, but you’ll probably spend most of the 90 minutes wondering how Franco ended up doing this extended cameo. 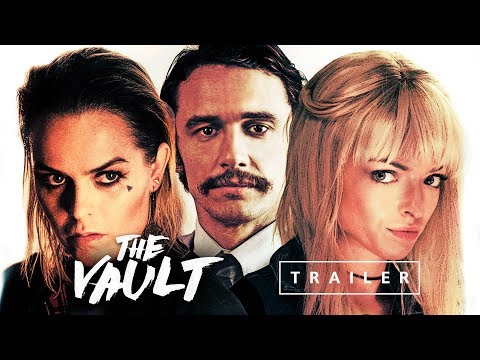