Just recently, The Simpsons cartoon scored another wild prediction that surprisingly came true. A clip from an episode that aired all the way back in 2014 successfully foreshadowed Richard Branson’s recent trip to space. Are the writers psychic?

One of America’s most popular animated families has garnered a curious reputation in recent years for its seemingly supernatural ability to predict the future. Whether it’s because of paranormal influence or due to the writers’ witty observations, the premonitory powers of The Simpsons are borderline undeniable. From world leaders to tech revolutions, The Simpsons always seem to be one step ahead of the rest of society. Is the most shocking case of life imitating art an unexplainable phenomenon or just some crazy coincidence?

We take a look at just a few of The Simpsons predictions that came true. 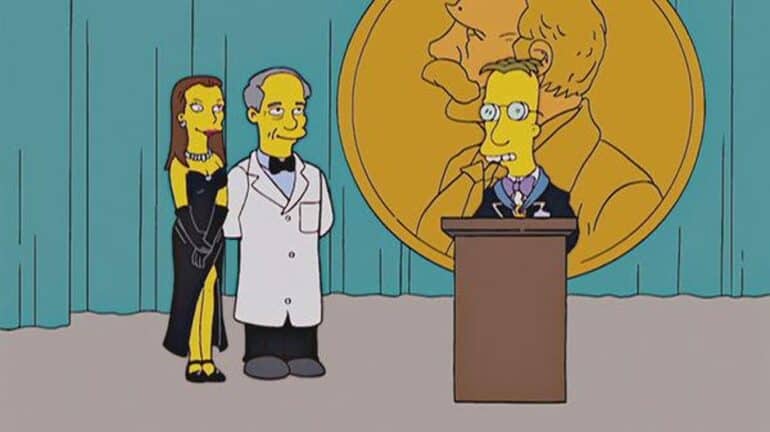 In 2010, The Simpsons debuted their 22nd season with the episode “Elementary School Musical.” While the episode isn’t anything out of the extraordinary – it was mostly a glorified Glee cameo –, it did predict who would win the Nobel Prize in Economic Sciences. Six years later.

In the episode, Milhouse hopes that the Economics prize goes to MIT professor Bengt Holmström. While economist Jagdish Bhagwati ends up winning in the show, Milhouse’s prediction did come true in 2016, when Holmström, along with Oliver Hart, was awarded the coveted prize. 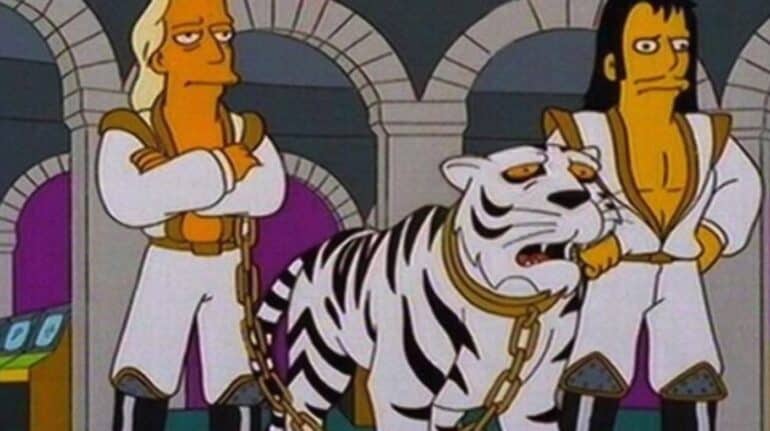 Siegfried and Roy: Attacked by Their Tigers

If you grew up in the ’80s or ’90s, you probably are familiar with Siegfried and Roy. The duo of entertainers gained a lot of popularity for their outlandish style and their majestic white tigers, who would usually perform with them in their shows. The pair became synonymous with Las Vegas, but there were some serious concerns about the health of their exotic pets.

In 1993, the episode “$pringfield (Or How I Learned to Stop Worrying and Love Legalized Gambling)” featured the magicians being attacked by one of their tigers. 10 years later, in 2003, Roy was mauled by a white tiger. Although he sustained some serious injuries, he lived to tell the tale. Unfortunately, the attack left him out of the entertainment business, and the duo had to bring their performances to an end. The Beatles: No Letter Left Unanswered

In season 2 of the show, Homer is shocked to discover that Marge was in love with The Beatles’ Ringo Starr when she was younger, and she even sent the musician some letters 20 years ago. Ever dedicated to his fans, Starr rigorously answers all of his fan mail, eventually answering Marge’s letter two decades after she had sent it.

Flashforward to 2013, when two lucky fans were surprised to receive a letter from Paul McCartney, fifty years after they had contacted the Beatle. Due to some confusion delivering the message, it never reached McCartney’s hands, but it was found by a historian years later. 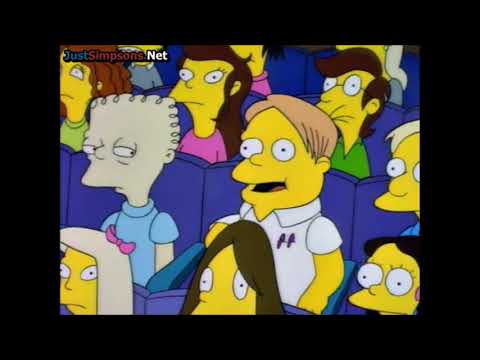 Apple: The Woes of Autocorrect

Season 6’s “Lisa on Ice” sees bullies Kearney and Dolph using an Apple Newton to write a digital reminder to “Beat up Martin.” However, due to the device’s poor handwriting recognition, it ends up reading “Eat up Martha” instead. This was a gag poking fun at the Newton’s subpar tech, but it would also play a pivotal role in the iPhone’s keyboard development.

In 2007, Apple’s former director of engineering on the iOS platform, Nitin Ganatra, said that the episode was a wake-up call for his team. The phrase “Eat up Martha” became an important reminder for him and his team of what they needed to get right to prevent the iPhone’s autocorrect function from messing up everybody’s messages. 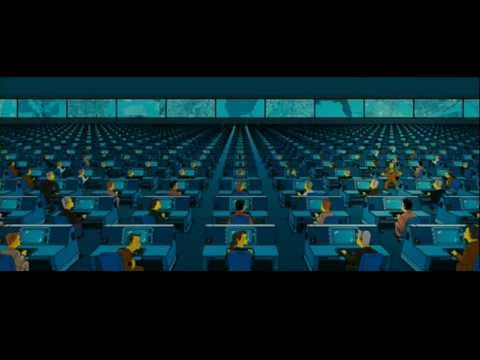 The Simpsons Movie was a cultural phenomenon. Fans everywhere received the news of an official Simpsons feature film with cautious excitement. While it might have been somewhat divisive amongst the most die-hard Simpsons fans, it undeniably marked a before and after for the show. This is definitely one of the more shocking The Simpsons predictions that came true.

In the movie, there’s a scene where the NSA is shown as an all-seeing agency that spies on the lives of every single American citizen. Six years after the film’s release, in 2013, Edward Snowden blew the lid about the ongoing surveillance program of the NSA on Americans, which was something downright Orwellian, and The Simpsons got it right years before it became publicly known. 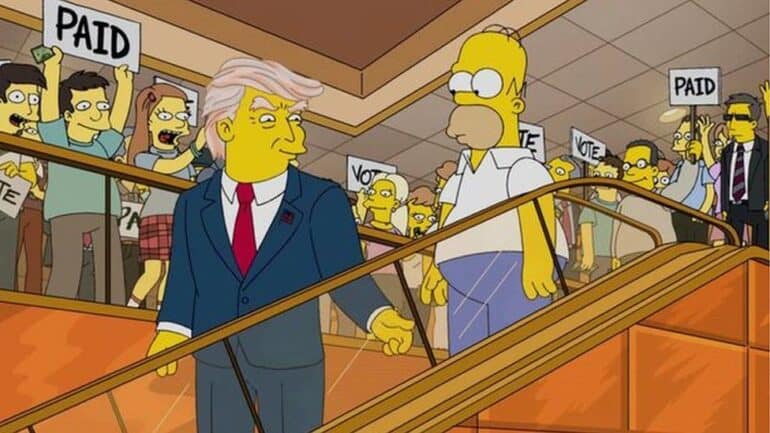 Donald Trump: President of the United States of America

In one of the most popular predictions that came true by The Simpsons, Lisa becomes president in the future and recalls her predecessor, President Donald Trump. This prediction has been seen as one of the most blatant examples of the show’s seemingly supernatural abilities to predict the future; however, the true story behind this premonition is almost as fascinating as what fan theories would have you believe.

The episode “Bart to the Future” was released in the year 2000, smack in the middle of a heated presidential election between George W. Bush and Al Gore. For many, the two-party system was reaching rock bottom – with some hoping for a third-party candidate to win the presidency. Enter Donald Trump.

Trump was a member of the Reform Party at the time but lost the presidential candidacy to former party member Pat Buchanan. There were talks of Tump being an ideal centrist candidate, and that’s precisely where The Simpsons drew inspiration from. 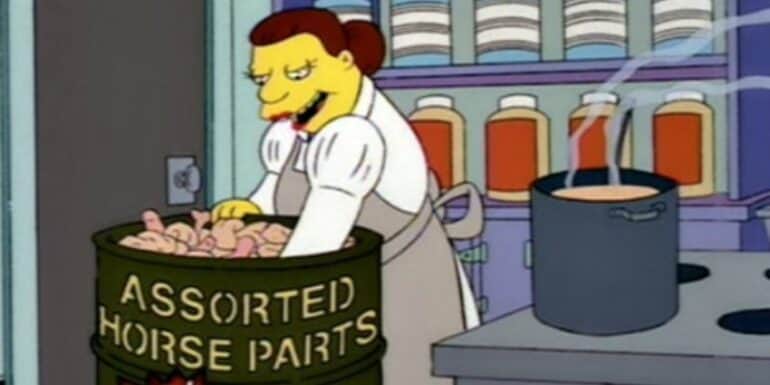 The earlier The Simpsons episodes have always been known for their sharp satire of American institutions, no matter how big or small they are. In 1994, they poked fun of school cafeterias and their dubious “meat” products, when they showed Lunchlady Doris using assorted horse parts to serve the children at Springfield Elementary.

In 2003, Ireland’s Food Safety Authority was in an uproar over an upsetting discovery: horse DNA was found in over one-third of beefburger samples from supermarkets. While they got the country and the institution wrong, The Simpsons hit the nail in the head with the ungulate animal they got the meat from. 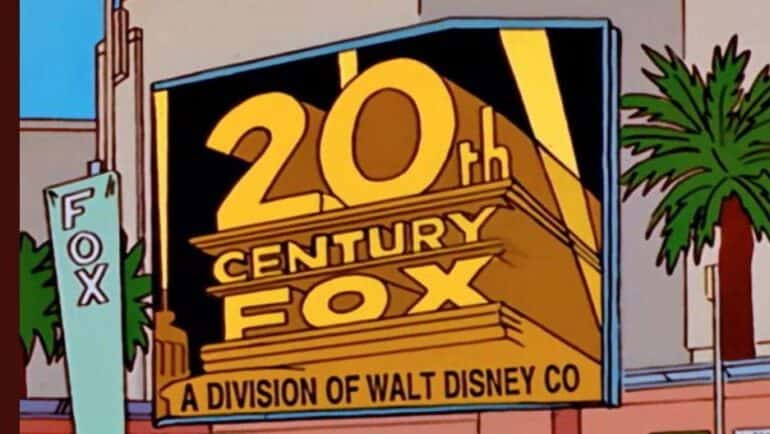 Now, this prediction is downright spot-on. In 1998, during the show’s season 10, Homer would get one of his first brushes with Hollywood’s royalty. A quick sight gag involves the 20th Century Fox sign outside of a studio being labelled as a “Division of Walt Disney Co.”

Let’s flash forward 19 years into the future, to 2017. One of Disney’s biggest acquisitions is 20th Century Fox, a move that made them the owners of everything Fox. One thing The Simpsons got wrong, however, is that they immediately discarded the “Fox” part of the name, as the studio is now known as “20th Century Studios.”

The Simpsons had poked fun at Disney more than a couple of times, so it’s even more ironic now that they are a part of the House of Mouse. With the show showing no signs of stopping any time soon under the new management, who knows what crazy predictions the family will get right in the upcoming seasons? Let’s just hope that they don’t predict any more pandemics (like they did in 1993’s “Marge in Chains”) any time soon.

What do you think of these predictions from The Simpsons that came true? Is it by chance or are the writers time travellers?