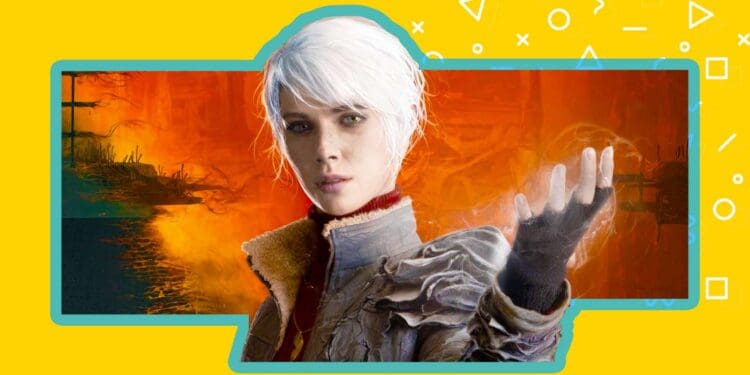 Leading up to the game’s launch, there was a great buzz about The Medium. And rightly so. The trailer set the scene for an enthralling horror split between two worlds. 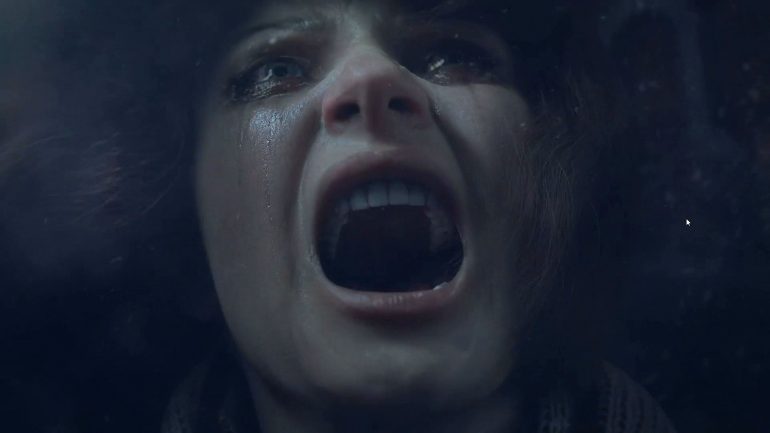 As the title spells out, the plot of the story revolves around a medium named Marianne.

The psychological horror game jumps between two worlds, a gloomy-looking real world and a macabre version of a mirrored world. Marianne is able to travel between these two worlds with her psychic abilities, which also allow her to fight off the forces that she encounters along the way.

The Medium takes the form of stimulating puzzle title, where Marianne is somewhat of a spiritual detective. This, however, isn’t by choice, as she has always been drawn to this via voices reaching out to her. Upon receiving a call to assist in an investigation, she travels to the Niwa Workers’ Resort. This facility is an abandoned Soviet Union-era vacation resort in the Polish wilderness.

As mentioned previously, Marianne’s spiritual abilities allow her to cross over to the other world. At first, this comes and goes in the form of a ‘split’ between the two. You’ll then be able to control when to switch between the two, while still in the split mode. However, controlling this ability is time-limited. Eventually, Marianne is able to fully travel into the other world by means of mirrors, bypassing obstacles from one world to the next.

In addition to being able to cross over, her abilities extend to fighting off the forces of evil that lurk in the other world.

Again, these too have limitations, as they require recharging. This is done via energy spots, called spirit wells. 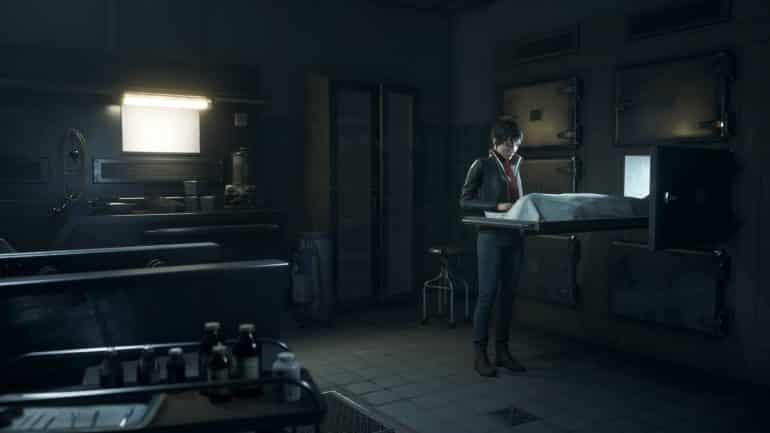 A lot of The Medium’s novel gameplay comes in the form of the split mode. It seems simple enough on paper, but you’re constantly having to battle the two different environments.

For example, one world would have a set of stairs, whereas another would stop halfway. It’s up to the player to figure a way around this. There are two options to do this, depending on your choice.

For starters, you can use the spirit swap in split mode, allowing you to take control of your other world self, which lasts a minute or two. If you don’t complete the tasks prior to this, you effectively die. This puts the pressure on, especially in those moments when it’s the only option.

An alternative option would be to find a mirror and switch between the two worlds. This is much simpler, especially when jumping from room to room to find clues and solve puzzles.

The Medium is played in a semi-linear world. It’s not quite following a straight path, but you’re limited to where you’re able to move. Your movement is further limited by means of the camera angles. While you may move back and forth between points, you cannot choose the camera angles, which change as you’re traversing the environment.

In the beginning, this limitation is somewhat frustrating, especially as you’re trying to find clues to move onto the next part of the game. In the end, it serves its purpose, heightening the intense situations.

This is particularly intense when dealing with the game’s malevolent antagonist, known as The Maw. When first encountering The Maw, you meet him in the spirit world. As a result, I often found myself trying to complete the next set of puzzles to get back to the real world just to escape its continuous taunting.

Things escalate when you realise that The Maw can cross between the worlds, too. What’s worse is that in the real world, it’s invisible. You’ll have to use your sense of presence to “see” where it’s moving and strategically work your way around to escape.

The Medium was designed to be played on the Xbox Series X. As a result, a lot of emphases has been placed on the graphics. Having requested a PC copy of the game via Steam, my gaming laptop was only able to manage the graphics on medium settings (no pun intended). I was able to get an average of 60fps here, which reduces little by little whenever I increased one of the settings.

The graphics take a bit of a knock when transitioning between the split mode or some cutscenes. At times, this made it a bit harder to manage certain key moments, forcing me to revert back to the default settings.

I realised that the game was available via Xbox Game Pass and decided to test it on the Xbox Series X as well. The graphics were impressive, a marked difference from my mid-range gaming laptop. On the Xbox, a lot more of the detail shines through, which includes HDR features. 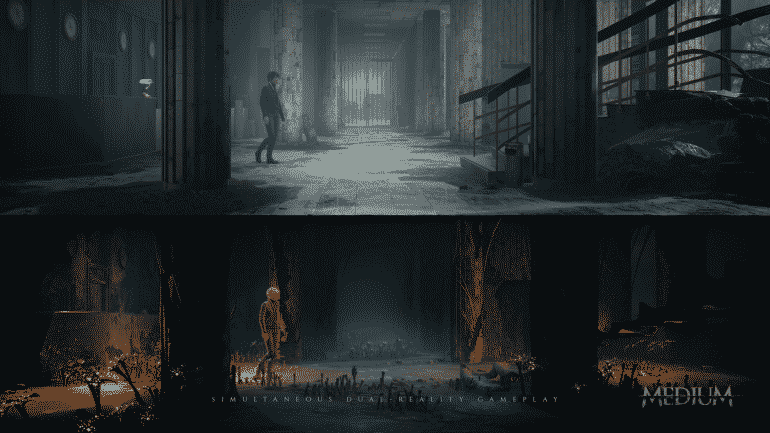 Marianne has a strong performance as the protagonist. You’re caught up in her world as she recounts the events from her past. However, it is the antagonist, The Maw, that takes the game to the next level. At the start of the game, I was simply playing to move from one puzzle to the next.

When The Maw enters, with his crazy mutterings as he stalks Marianne, things seem to have more consequence. It’s especially thrilling due to the fact that you never know when it’s going to appear on screen again. It’s also worth throwing it in at this stage that The Maw can’t be killed. So, there’s that.

There are quite a few characters you encounter throughout The Medium’s runtime. However, these appear as spirits in some or other form. These can be as a result of spirits you encounter, namely Sadness, a kid who was a resident of Niwa prior to the incidents that occurred there. Other spirits are seen as memories you can piece together. And then there are the deceased victims, who are stuck in the spirit world and not allowed to pass on until you’re able to assist them.

Apart from a few graphical glitches, this is my biggest gripe within the game.

There are quite a number of characters you come across in some form or another. However, their stories are fleeting, seemingly to add some filler more than being fully developed. It would be great to have seen these stories told in more detail, although it would stack some time onto the 9 to 10-hour gameplay.

Speaking of which, The Medium is of a reasonable length. However, it can sometimes feel as if you’re simply going through the motion of ticking boxes. In one instance, this is literally the case. Having figured out a puzzle, I went back to provide the answers I’ve uncovered. However, it wouldn’t allow me, as I needed to go back and tick a few boxes so show that I’ve figured it out. 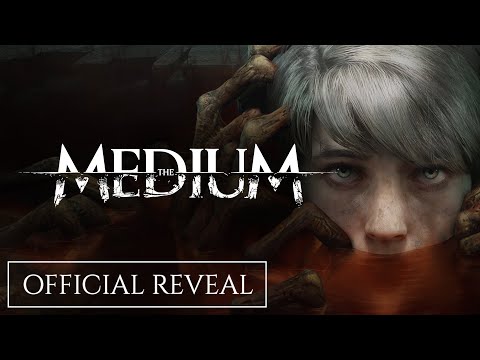 The Medium is a solid psychological horror game. There are sufficient thrills without the overused jump scares. The environments, as well as The Maw, make for some intense moments as you attempt to figure out the history of Niwa.

Despite a few glitches and some limitations in the gameplay, I truly enjoyed the game. It’s a chilling ride from start to finish. It takes some time to get into it, perhaps even half the game’s playtime, but once it gets you’re hooked, you won’t be able to put down the controller.

A highly recommended game for those who love the genre.

The Bloober Team provided a review code to Fortress of Solitude for the purpose of this review.

The Medium is a really good psychological horror game. This is a must-play for fans of the genre.