The Immortal Men #5 Review – Establishes Caden As A Hero 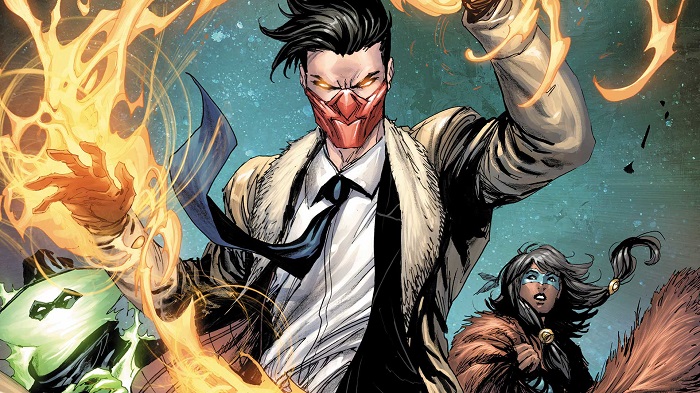 The Immortal Men #5 appears to be the penultimate chapter to the finale of the eternal war whilst also serving as the true origin of Caden Park, perhaps as the new Immortal Man. A slower issue once more, this was built around a big reveal, a comedic side story and an emotional subplot; although, perhaps this won’t serve as the most memorable issue, not only was it useful in adding complexities to our characters but also provided us with one big memorable moment.

For the Immortal Men, who have fled back to the destroyed Campus, their previous home, they are left to mourn the dead that have long since passed. Priding themselves on respect and dignity, they do the right thing by sparing a moment to bury their former brothers and sisters. This is a powerful moment and one that reminds us that these people are a family and have interacted with each other for centuries, a bond that few teams have. This also did well to bring us back to a theme of memories, which is crucial to our main character, Mr Park. Elsewhere, Roderick Clay has found an A.R.G.U.S. black site that he wishes to use in order to contact Amanda Waller about the oncoming threat and the weird happenings. Unfortunately, he clearly doesn’t remember the codes and the site itself is stored in a Build-A-Bear. A comedic entanglement ensues between a bear and two guards and Clay, with him seemingly getting no closer to his desired outcome.

Back at the Campus and Park has discovered the Bloodmask, a creation of the Immortal Man, designed to hold together the memories of everyone lost. With Park’s abilities he can access those memories, using them to become the hero he always wanted to be. Also, it’s a pretty cool mask, so there’s that. I love the final design for Park, with it being sleek and quite different for the DC Universe. This has propelled Caden’s momentum forward, joining back up with the Immortal Men, with Communion as his sort of Jiminy Cricket.  Now, their mission is to take the fight to the Infinite Woman, rescuing Reload in the process and ending the eternal war, which is to come in the next issue. As I said previously, whilst not the most memorable issue, The Immortal Men #5 did serve to move a lot of the plot forward and gave us our big hero moment at its conclusion. This feels like a well-oiled and completed team now and I imagine by defeating the Infinite Woman in the next issue, the momentum will continue forward into new threats, perhaps the Batman Who Laughs. Despite the slowness, it provided a good breather for the series and gave some very compelling character moments and artwork. The designs of some of the other characters in particular are especially growing on me and I felt like the bear sequence was a lot of fun. A good read if you’re looking to take a break from other high-pace issues this week!