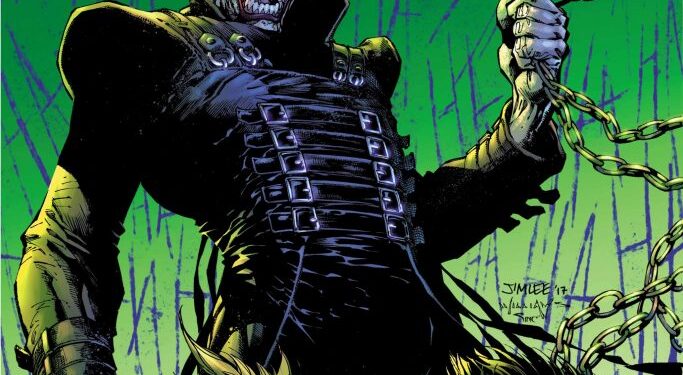 Continuing on from the attack on New York that we experienced in the previous issues, Caden Park is still on the run with The Immortal Men, who are down in their numbers, thanks to Reload being captured. Trying to explain the situation to a boy who has just lost his parents is proving incredibly difficult. Not quite grasping hold of his powers, the arc of Caden Park takes a backseat in The Immortal Men #3, in favour of further developing some other characters. We see how his bodyguard is still on the search and we get some backstory for our other heroes, notably Ghost Fist and Reload, who seems to have some kind of close relationship with the Hunt, which dates back to the Vietnam war. The villains are showcased a lot more this week, however, with the re-emergence of the Batman Who Laughs, a character that is sure to become even more iconic as this series progresses. By far the most intriguing, through him we explore our other villains a little more, especially their motive. The key here seems to be to bring the eternal war to Earth in order to increase evolution of the human species. The war would force Earth to develop further and become far more advanced, as humanity has become stagnant. Perhaps not entirely convincing, this plot point does separate them from being completely evil, although the Batman inclusion suggests that there is little more than madness at work here.

With so many new characters featured in this tale, it would be hard for audiences to become invested in them. To keep developing them each month like this is much more practical as we are slowly uncovering more and more. Perhaps this is right issue to do this in as it seems we will be fully back in the action in the next issue.

Quickly becoming a standout of all the new titles DC has launched, The Immortal Men are still just as intruiging as when we first met them. I, however, do not feel like I am fully invested in any of them, save Caden and Reload, who do seem to be the main players in this tale. The villain sidekicks are a little more fleshed out at least but don’t expect them to last for many more issues. The art in The Immortal Men #3 is spectacular, as always, and the Immortal Men continues to play with the world it has been set up in. The Metal arc has been very beneficial in setting up titles like these and it shows. Caden’s adventures are only just beginning and it looks to me that perhaps the initial stakes of the series might fall away after the next issue for some longer term storytelling.