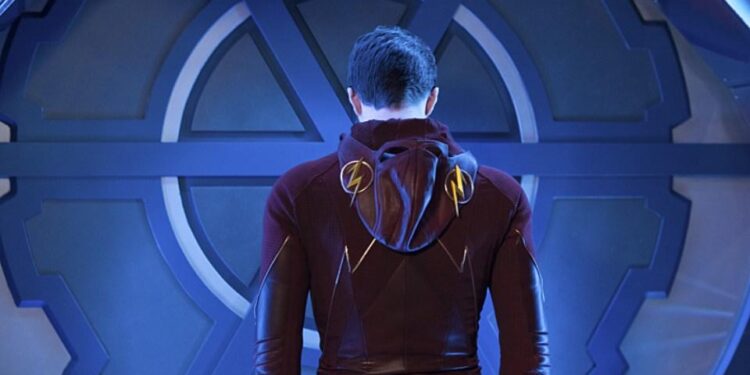 Good question, Caitlin Snow. I’ll ignore that you’re a scientist who’s been working on a particle accelerator, in particular one which has malfunctioned before. Actually, no I won’t. How has she never heard of a singularity? She may be a bio-engineer, but her stupidity here didn’t make sense. That line should have gone to Eddie! Anyway… One of my biggest fears was that the finale would have Barry going back in time and “resetting” things so that his mom lived. That would create a time paradox so complicated that all they would be able to do with season 2 is reboot season 1. Paradoxes are never easy to resolve, and the more you mess around with a timeline the worse it gets.

I’d really hoped that the writers on this show would have a way to resolve the storylines that they’d put into motion.

As it happened, Barry didn’t save his mom anyway because his alternate future self warned him not to. That’s good. Eddie committed suicide to “kill” the Reverse-Flash. That’s bad.

I can’t tell if the writers here are backing themselves even further into a corner for season 2, or if they’ve pulled off the best, smartest and most brilliant piece of cinematic sleight-of-hand in television history. If they have, it may confuse some viewers though.

Let me explain: Eddie didn’t kill himself. He isn’t even dead.

If Eddie killed himself, then the Reverse-Flash can’t live. That means that Barry’s mom is alive and his dad isn’t in jail. The real Doctor Wells is alive, and so is his wife Tess. Great.

It also means that they’ll only switch on the particle accelerator in 2020, and presumably that’s when Barry will get his powers. In that timeline, Eddie won’t be dead though because none of the events leading to his suicide will have happened. So in years to come, Eobard Thawne will still be born in the future and become the Reverse-Flash anyway. So the Reverse-Flash will go back in time and try to kill young kid-Barry, only the older Flash will save kid-Barry and in turn Barry’s mom will die, just as before. Eobard Thawne, being stranded in the past, will kill the real Doctor Wells and trigger the particle accelerator early. Which leads us to where we are now: a massive paradox and time moving in an endless loop.

I don’t know about you, but I don’t want to watch season 1 on an endless loop. It was good, but not that good.

They’ve said that Eddie is the one person in this whole scenario who gets to make his own future. The problem is that there are two “futures” here, and they can’t exist together. As it is, there’s no way that Eobard Thawne should have been fighting the 2020-created Flash if he killed Barry’s mom, because that Flash wouldn’t exist!

Also, run that by me again how Barry can go back in time by one day, still retain the memories of the day he’s just come from, but there’s only one Flash there? Can only one exist at a time? If that’s the case, when he went back to save his mom shouldn’t he have wiped out 2020-created Flash and kid-Barry? Or shouldn’t 2020-Flash have wiped him out?

So where does this show go to from here? How do they resolve this twisted knot of wibbly-wobbly timey-wimey stuff? Honestly, I don’t think Stephen Hawking could figure this out. Can they say that both timelines exist simultaneously, but that one is on a parallel Earth?

Eeeeh… sure, why not? It’s one way to sort it out and get themselves out of this mess. But that means that the Reverse-Flash isn’t from this world at all (let’s call it Earth 2), but instead he’s from the one where Eddie lives and Barry only gets his powers in five years time (let’s say Earth 1). So he isn’t really just a time-traveller, he’s an infinite Earths traveller.

Although, again, it would mean that Eddie’s death shouldn’t have affected Eobard of Earth 1. Try explaining that.

On the plus side, they may say that the Reverse-Flash isn’t from Earth 1 either. We saw Eddie’s body get sucked up into the singularity. What if he’s protected by the speed force somehow and emerges bitter and twisted in the future, where he’s healed and claims the name of Eobard Thawne?

What happens with this present Earth 2 timeline if they can either explain why they aren’t in a time loop, sweep all of this chaos under the rug and hope nobody notices, or choose to focus on an alternate timeline for a while?

Who knows? But they’ve guaranteed that we’ll be watching.

I just hope that Jay Garrick shows up to clear some of this mess up soon.