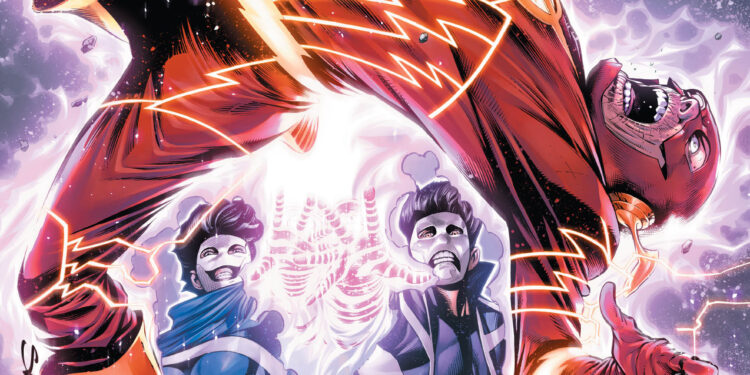 The Flash #59 continues Barry’s and Iris’s Force Quest. They seek the missing answers to questions surrounding the strange new forces emerging. With the last issue introducing us to new villains Gemini and it concludes in the ransacked Gorilla City, where Grodd’s people have been slaughtered.

Setting up another mystery for The Flash, although with the answer fairly obvious to readers, issue 59 gives a few more answers, whilst also building upon previous problems and conundrums. Although it is not as entertaining as some other issues, this stood out as one that really moved the plot forward, giving us some interesting character interactions and a flashback at the start that served continuity well.

The Flash #59 opens with Flash in Gorilla City, talking to the long since passed King Solovar. This was the first time Barry had heard about the Speed Force and there is some regret there that he never took the time to listen to what Solovar had to tell him. A lesson he is continuously learning is to slow down and pay attention to the things around him. Part of this Force Quest is for Allen to become a student again and take things back to basics. For instance, wanting to whisk Iris back to Central City, he would have missed the secret passageway. There the surviving primates show them their lab, where a hologram of the deceased Solovar starts to explain a few things about the Forces.

Whilst this is happening, Gemini are pillaging the remains of Gorilla City. Upon the Flash and Iris leaving, they attack the remaining primates and get them to tell them all they know about the Forces. It is clear they are hiding something from Barry that he is not yet ready to hear, but it’s probable he will get that information from Gemini now. 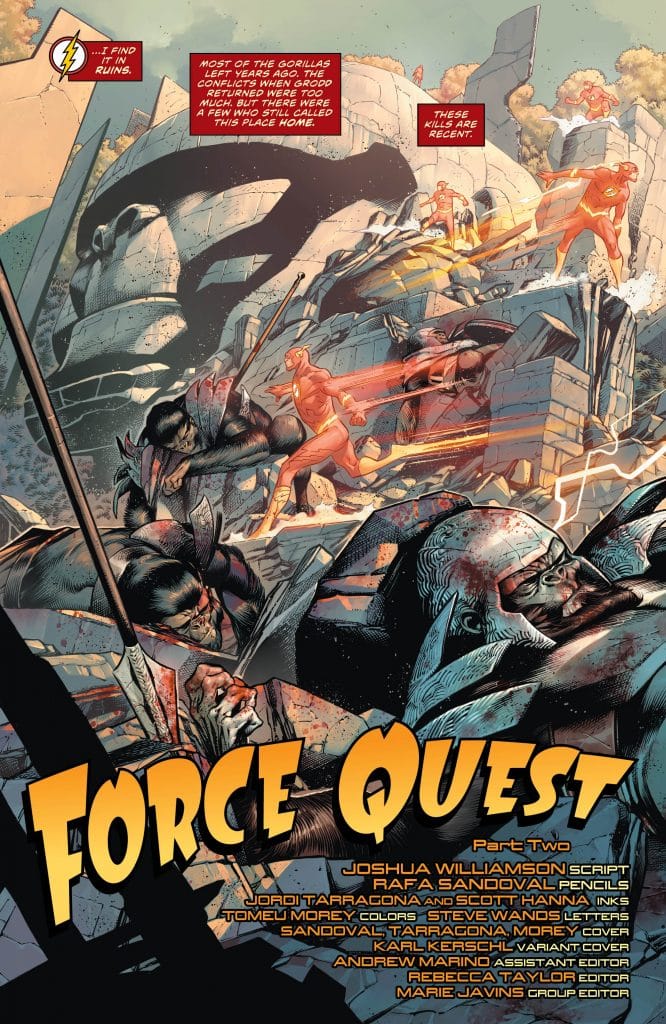 After talking to Commander Cold, Flash and Iris, head to Corto Maltese, due to a spike in the Strength Force. Here we meet Fuerza. It’s interesting to note the symbol she features on her costume is the same as shown by Solovar when talking about the Avatars, suggesting she may in fact already possess the abilities to be the Strength Avatar. Unfortunately, in comparison to Gemini, Fuerza is not as well designed in my opinion.

This sets up the next issue, which features The Flash vs Fuerza. It seems Zoloman is also not far behind the Flash on this Force Quest and so this narrative continues to build as one of the best Flash stories in recent memory.

Continuously inventive and well written, the plot of this arc is more compelling than many others in parallel books.