Having finally taken the decision to embark on the recommended Force Quest, Barry Allen, alongside Iris West, travel to Badhnisia in the South China Sea with the hope of discovering something more about the strange new emerging forces. A long way from home, and at the start of a brand new journey, The Flash #58 explores how out of his depth Allen really is with the new status quo and unique surroundings. Encountering some low-level crime and some unexpected enemies along the way, this issue is an interesting exploration of how The Flash will cope once everything around him has been changed. 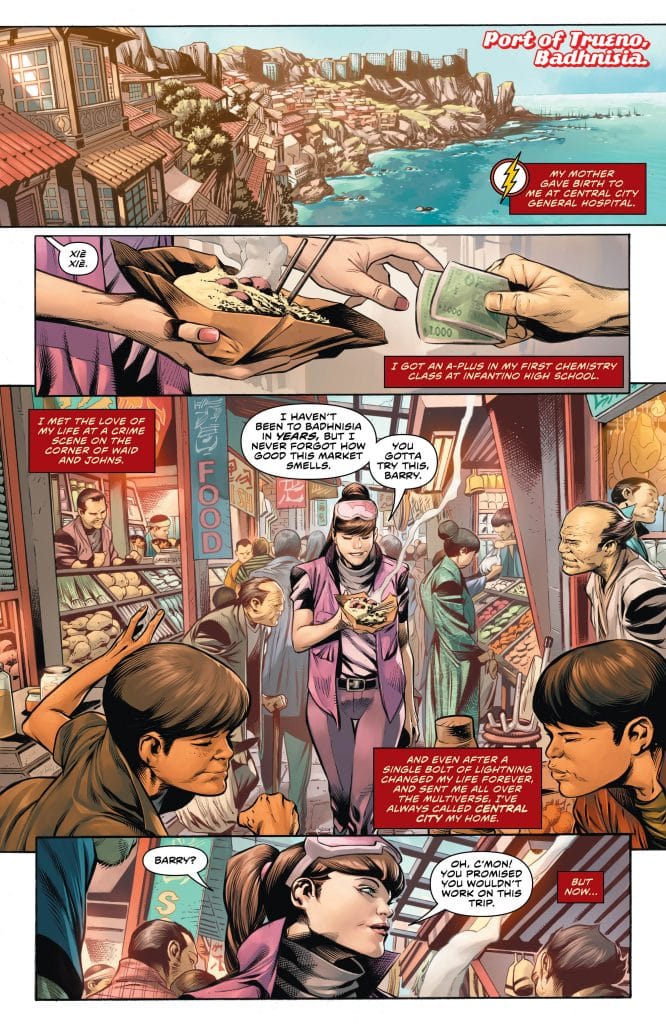 Iris and Allen’s travels to Badhnisia start as a usual trip for the pair. With Iris experience the local culture, having travelled there once before, Flash is dealing with a completely different location in the Port of Trueno, chasing down a low level, bag snatching, criminal. Unable to navigate the streets quite as well as Central City, Allen scraps his way to victory, negotiating his way through a densely populated area, fixing a tram and having to ask directions to the nearest police station. His homesick nature is very apparent once returning to Iris’s side, craving some Central City comforts. Iris herself fears that Allen may return home, quitting his quest, although Barry is determined to see it through.

Refreshingly, The Flash #58 continues to follow the couple, rather than jumping to other subplots, taking us to a historic Church that is integral to the Island’s history. Upon entering the ancient architecture, they are met with two treasure hunters that have trashed the place and made a getaway with a precious statue. Flash is in hot pursuit, although discovers that the couple calling themselves Gemini have acquired a sort of strength force from the combination of the mystical statue and their energy enhancing gauntlets. These powers level The Flash and the historic Church, with Allen just saving a kid from the crumbling ruins whilst the Gemini couple make their escape. Allen admits he is making basic mistakes that he would not have made in his hometown, suggesting that being a long way from home is affecting his better judgements. No closer to the truth of the forces, Allen decides to take Wally’s advice and allow the speed force to guide him, whisking himself and Iris away to Gorilla City.

Despite Iris wanting to play tourist, something is clearly on the same quest as the Scarlet Speedster, as Gorilla City is home to a primate massacre. With Gorilla’s dead in every direction, a dangerous foe is clearly just ahead of the speedster in his journey. The villain that has caused this is most likely Hunter Zoloman, who was teased in the last issue.

The Speed Quest has been interesting thus far, with some genuinely well-designed villains for The Flash to face; their costumes and dynamic being especially compelling. Whilst there were fewer answers in the issue than I would like, the tale is clearly playing the long game. I don’t mind that, especially if the focus is entirely on Allen and West as they continue their journey together, in a much more streamlined story.

With some quirky art and great character interactions, there was something fresh about The Flash #58.

The Speed Quest has been interesting thus far. With some quirky art and great character interactions, it's really something fresh.