The Flash #48 Review – The Flash Race Has Begun! 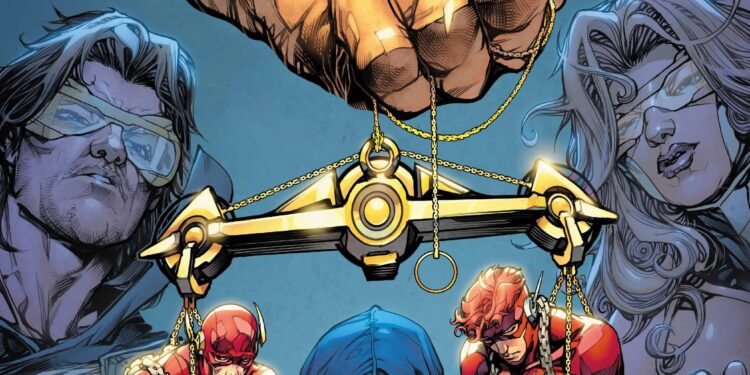 The creativity and quality of storytelling in The Flash #48 truly caught me by surprise. A narrative that has been building for some time as a result of the groundbreaking Flashpoint arc, The Flash War Part 2 was much more character-driven than I was expecting. Some of the subplots of the previous issue were just red herrings for a much larger plot that seeks to destroy the bond between Wally and Barry and reunite the former with his lost family. The Flash #48 continues in the future, where the Renegades have brought our heroes. Iris’s trial is non-existent, however, a fakeout in order to bring everyone to that time period. Barry quickly turns on Commander Cold after realising they had all been played.

Meanwhile, Wally and Hunter are in a very similar situation, with conflict arising over whether a depowered Zoom is actually telling the truth about Wally’s family. Wally re-entering the speed force is the only way to save his children and bring them back into the new DC universe. The layers of memories that have been pulsing through Wally has continuously broken him down, showing him a life he once lived that has been stolen away from him.

Upon Barry and the Renegades arrival, Wally makes the surprising choice to spare Zoom so that he can have answers to the questions that have been plaguing him since his return. It is that which starts the Flash war, with Barry urging Wally to reconsider and find his family in a less dangerous manner. Barry is committed to not allowing his friend to make the same mistake he did, the mistake that cost him so much more than just his family. Wally escapes with Flash in pursuit, thanks to Commander Cold.

Cold seems to be having a change of heart regarding his Renegade status, suggesting that he might be better off as a Rogue. Hunter, on the other hand, certainly seems like he is pulling the strings of a much larger game, manipulating all of these characters to divide and conquer. His explanation of having a change of heart leaves a lot to be desired.

So the Flash race has begun, with both Barry and Wally racing towards the speed force in order to save family or prevent the collapse of the universe all over again. The stakes of this series have certainly increased in magnitude and I feel, bar Wallace and Iris, that everyone was used effectively in The Flash #48.

The art is stellar as usual and the storytelling really phenomenal. Setting up the next issue perfectly and setting out a very clear plan of where it wants to go, The Flash #48 has upped the bar once again to deliver something worthy of the Flash title. Where the conflict goes from here is anyone’s guess but a simple fix I believe is out of the question, with the ramifications of this being a lot larger than anyone previously predicted.