It’s the most wonderful time of the year. As you enter Manhattan, you’ll notice festive lights lining the store windows as the snow softly falls on the streets and sidewalks. Under normal circumstances, you would think that this scene would be the perfect backdrop for Christmas, unfortunately, a virus called “Green Poison” has devastated the city of New-York. 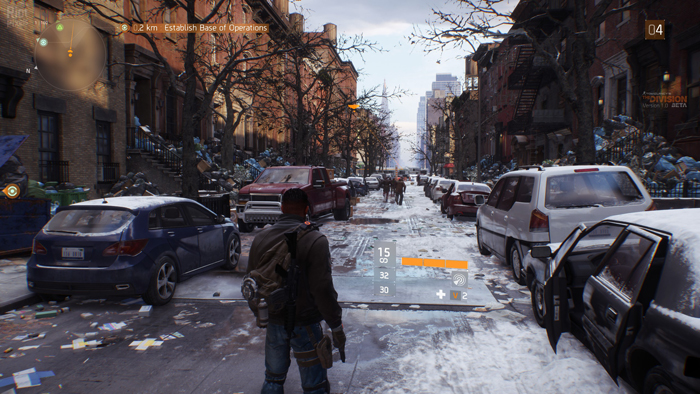 Gangs have taken advantage of the chaos and are roaming the streets preying on the survivors. The city is under siege and it is up to you as part of a The Division to help restore order to the city and find the cure.

The first thing you will notice when playing The Division is how good the game looks. This isn’t your typical brown and grey apocalyptic environment. New-York is a city full of colour, giant electronic billboards bathe their surroundings in bright light, and in the distance, a vivid orange hue signals a fire burning somewhere.  Not only is the city strangely beautiful, but Ubisoft has gone to great lengths to include as much detail in the city as possible. The Division succeeds in telling stories through the environments to those who are willing to slow down and explore the city. Everywhere you go the effect of the chaos caused by the virus is evident, garbage lines the streets, cars have been abandoned on the roads, all over there are signs of the devastation that has been caused. It’s this constant reminder of what has happened and what is at stake that got me feeling invested in my missions.

While on the subject of missions, The Division’s main story missions are great at surprising the player with unique and diverse environments, from grimy sewers to a glitzy embassy. These missions also ensure that things stay interesting by adding some intense boss battles, which kept forcing me to change my tactics in order to survive these encounters. It’s a shame then the side missions aren’t as interesting as the main story missions and tend to recycle a lot. Sure the locations do vary from time to time, but these still felt like a grind especially since you will be doing a lot of these in order to level up your character. Levelling up and progressing through the perk, skill and talent trees of The Division, is tied to the evolution of your base. By upgrading the security, tech or medical wings using resources gained through completing missions, players are able to unlock new abilities. Not only is this mechanic great at making your feel that upgrading your base carries weight, but your base also visually changes when upgrading these, which gives the player a sense of accomplishment.

Equipping your character with new gear and weapons can also affect the stats of your character. Hunting new gear and equipment is vital as I always felt little underpowered compared to my bullet soaking foes. This isn’t necessarily a bad thing as there is always the sense of relief and accomplishment when finally completing a very difficult section. The Divisions also allows players to break down equipment, weapons and mods that they don’t need in order to craft better gear. I found myself spending more time crafting gear than actually purchasing it from vendors.

There is no doubt that The Division is a tactical RPG, and this is just made more apparent during combat, which works great most of the time. The game’s cover mechanics worked well as running from cover to cover felt fast and fluid. My biggest problem though is the fact that there is no prone or crouch button, which makes sneaking around when there is limited cover difficult. If you are not familiar with RPG games you will also need to get used to the fact that enemies tend to be bullet sponges as headshots don’t necessarily instantly kill enemies, this of course forces players to think more strategically when deciding on which load outs  and abilities to equip, as well as how to approach the enemies. It’s in these moments that the game felt like a true Tom Clancy game, as just running and gunning will end in a quick death. The Division can also be played with up to four friends. It does remain fun and viable to play the game solo, although it can become difficult should you not have a high enough level or the correct load out. I spend most of my time playing the game solo but found that pulling together four friends added another layer of enjoyment to the game. Being able to flank your opponents and cover multiple areas makes the game feel more strategic, and having your team finally be triumphant against overwhelming odds became some of the most memorable moments in the game.

If you feel like a little back-stabbing you can venture into the Dark Zone (a massive PVP area), which is just as scary as it sounds. This is where the virus hit the hardest and where players can get some of the best weapons and equipment in the game. In the Dark Zone, you will find both other human players and enemy AI roaming the streets. While wandering through The Dark Zone looking for some rare equipment, other players may aid you in your task, the catch? Equipment scavenged in The Dark Zone needs to be evacuated using a helicopter, which of course takes a while to arrive. At any time, your “team-mate” can (and probably will) shoot you and steal your equipment for themselves. This makes for some very tense moments as you try to figure out if the player helping you can be trusted. Naturally every action has consequences and this is true in The Dark Zone as well, as back-stabbing a fellow agent immediately marks you as a “Rogue Agent”. Being marked as a Rogue Agent places a very lucrative bounty on your head which makes hunting you very enticing for other players.

I enjoyed playing The Division a lot more than I initially anticipated I would, especially since I tend to prefer playing games solo. The fact that I could play the campaign on my own and not be punished too much for it is a great plus point. This said I must also admit that there are few things as fun and satisfying as getting some friends to join you in completing missions. The RPG mechanics works surprisingly well for a team based shooter, and I found myself quickly becoming addicted to chasing down better equipment and weapons. Although some of the recycled side missions doused my enthusiasm a bit at times, I always found it reignited when an interesting story mission popped up. There were times when the cover mechanics and lack of a prone/crouch button resulted in my demise, but it never became too much of a problem. I also noticed that the game had a steep difficulty curve even though I never felt that I died or got stuck because of this, most of the time perseverance prevailed.

The Division is a beautiful, engrossing and sometimes difficult game, which entices you to continue playing with the promise of better equipment weapons and skills.