The Captain America ’79 SEQUEL?!: time for another look Wow, that Captain America 1979 movie was dull. But get this – they made a sequel to it!

That could be a good thing. Seriously, look at Winter Soldier and tell me it wasn’t better than the Captain America: The First Avenger. Sequels used to be a dirty word, implying a cheap cash-in on the success of the original. But sequels can be better than the original, and surpassing the ’79 Cap film doesn’t sound too hard. Reb Brown returned to suit up, screen legend Christopher Lee was brought in as the new villain… what could go wrong? 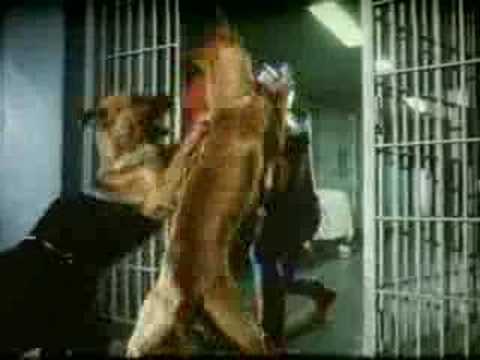 00:00:46 Woah! Right out of the blocks this jumps into the theme tune and a shot of Cap riding his bike at us, doing a wheelie! Connie Sellecca is an attractive addition to the cast. Christopher Lee is… Miguel. Miguel?! What kind of a supervillain name is that?!

00:00:56 It’s that footage from the first film you know and love: the helicopter shot of the road below, and YES! There’s the pilot’s head is accidentally in frame again!

00:02:36 Did they have to use all of the helicopter footage from the first film though? The music suddenly becomes sappy, and we know it’s old footage because Steve Rogers’s van is the one from before it got customised. I say it’s a cheat!

00:03:50 Steve’s sketching an old lady and saves her from a rogue frisbee-catcher. But wait, what’s this? She knows that muggers are targeting old people in the neighbourhood? This looks like a job for…

00:05:55 …Captain America! After biking about and stopping a mugging, he finally gets to use his mighty plastic shield! After knocking a mugger down, it hilariously clatters to the ground with the sound of ricocheting Tupperware!

00:10:02 Back at the government labs, Simon the scientist discovers that Professor Ilson is missing. Has he been kidnapped by fiendish terrorist Miguel? And why call Cap and not the FBI to solve this?

00:12:49 Miguel’s a sneaky one, putting his secret base inside an Oregon prison! Also, while he may not be Count Dooku, Christopher Lee’s rich voice still oozes menace.

00:19:35 Cap has followed a lead to the local docks, scaled a crane, tipped over a fork-lift truck with his bare hands and beaten up several dock workers. He’s found the drugs he’s looking for, and things are looking promising so far.

00:27:08 Cap’s followed the drug shipment (uh, didn’t he intercept that already?) to a small town, and as Steve Rogers he’s minding his own business painting a portrait of a cat. Some menacing henchman have ruined it by painting glasses on the cat. Oooh, trouble’s brewing. 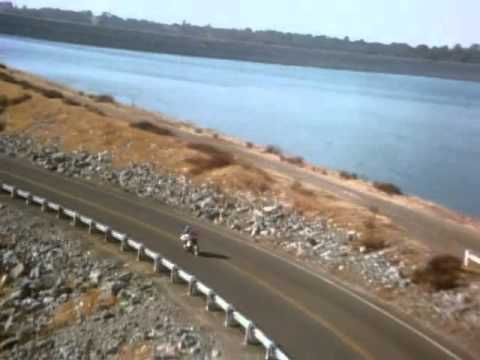 00:29:40 Wait, has he adopted the cat? What if it belongs to someone else? Worse, Steve’s creeping out a local single mother by taking special interest in her son and wanting to hang out with him. I see him getting put on a list soon…

00:31:01 Oh! Score one for Steve as he’s done some detective work using a sneaky plan involving the cat, and has uncovered that the local vet is a fraud!

00:36:28 Steve’s ruffled too many feathers with his poking around, and some henchmen have come looking for a little clobberin’ time.

00:38:42 Anyone want to guess how that went? After an Extreme Makeover: Captain America Homewrecking edition the only damage to Steve is a suspiciously torn shirt.

00:42:20 It’s good to know that in a world where a terrorist is threatening the president, Captain America can take time out to get to know a single mom and her son a whole lot better.

00:43:49 Weird. The kid’s pet lamb has mysteriously died of old age. Also, the offer of making him some lunch doesn’t interest him at all. It’s a good thing they didn’t tell him what was probably going to be on the menu.

00:44:46 Back at the prison, Miguel is keen to keep his stolen aging gas a secret as a secret weapon for as long as possible. Also he’s suspecting the Steve Rogers may be more than he appears. “He’s no wandering artist… he’s too intelligent and inquisitive for that,” he says. Oooh! Burn on you, artists!

00:47:11 Steve’s been arrested on assault charges! Don’t worry, he’s easily escaped from the county lock-up, donned his costume and wheelied his bike past Miguel’s henchmen just to show off.

00:50:01 Wow! A dull bike chase scene end in almost Winter Soldier fashion, with Cap ramping his bike over some oncoming enemy jeeps – and plummeting down hard into a massive dam. Will our hero survive?

00:57:55 The lab jockey heroes are coming up with nada in their race to find an antidote to the aging gas, while Miguel has sneakily gassed Portland using a sky-writing plane that left a twisted message saying SMILE. In a damning indictment of Portland’s education system, the gathered crowds think it spells out “smoke”, “smell” and other things.

00:59:59 Thankfully, Steve’s okay and has learned the truth –  that the small town of Bellville has been Miguel’s ground zero for their gas testing.

01:06:57 By figuring out the fake vet’s route, Steve’s got the first real lead and is heading to the prison where Miguel is hiding out. It’s time to suit up and go to work!

01:09:13 Cap’s broken into the prison and driven his bike (uh, shouldn’t that be at the bottom of the dam?) down the corridors. But Miguel is nowhere to be found.

01:11:21 In a scene nothing like Ang Lee’s Hulk movie, Cap has to fight some gassed, mutated dogs. He should throw his plastic shield like a frisbee for them to fetch.

01:12:52 Cap slides down a stair railing. Not the super-soldier excitement you would imagine.

01:14:34 What the..?! Racing off a building, Cap’s bike has sprouted hang-glider wings! You’ll believe a Cap can fly! But why didn’t he use it when he was falling into the dam?

01:17:26 It’s the chase you never knew you wanted but got anyway. Cap’s hang-glider bike vs. Miguel’s stationwagon. Someone get me a coffee.

01:18:47 Now that Cap’s back on solid ground the chase has continued, with the stationwagon and bike racing over speed-bumps.

01:20:27 Finally having pulled over, it’s a tense stand-off in the forest as Miguel has a machine gun and a case full of the aging gas and its antidote. Thankfully, Cap has super-heightened senses and can tell where the villain is.

01:21:31 The shield is thrown… and it’s missed! Even on its return flight it missed Miguel, and he seems pretty smug about it.

01:22:05 Still, the shield has deflected Miguel’s gunfire. Cap’s rapid reflexes seem to be on slow mode though, as Miguel throws away his gun and fiddles away at the case, finally producing a bottle of the aging formula. C’mon, Cap – you could have raced over and knocked him out while he was doing all that!

01:23:35 No surprises for guessing what happened to Miguel when the aging formula covered him. Old geezer alert. And so the day is saved once again by Captain America!

01:25:10 Oh, wait, first they have to dumb the antidote over Portland. I could swear the interior helicopter shots look identical to those from the end of the first movie.

01:26:10 Steve Rogers just bought that kid a puppy, reminding us that taking care of someone – human or animal – is a grown-up responsibility. Well said, Cap. Now… what happened to that cat you took in earlier?

01:26:58 Steve’s sketching this kid’s mom, and seems quite content to watch her ride a horse all day. Creepy. Okay, in its defence it’s better than the first film, with a little more action and a slightly better plot. Heck, Cap even gets the proper clothes (sort of) and really has a key role in saving the day at the end. Unfortunately, being better than that first film doesn’t mean this one is good. It isn’t, and suffers from many of the same problems as before with a lack of excitement being key.

It’s kind of a shame, really. If a little more thought had been put into the script and a little more money put into the budget, this could have been a decent film. I’m also saddened because I remember seeing this when I was a little kid, and at the time I enjoyed it. But I don’t think this would impress anyone these days, even little kids. We demand more of our superheroes these days.