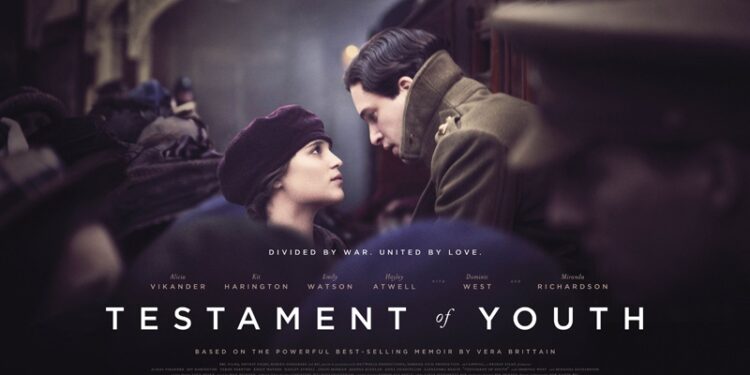 Testament of Youth is in many ways a ramped-up BBC period drama, but that is said with the utmost of respect. With the hot-topic period of the moment being World War 1, because of the period of centenary we are going through, Testament of Youth adapts the true-life account of war-time nurse Vera Brittain to great effect, providing a distinct insight into the terrible period known as the “War to end all Wars.” Vera is played by Alicia Vikander, who definitely seems to be going places. She is by far the standout figure of this film, and it is in many ways due to the success of this actress. The film focuses on Vera and her life of privilege in Britain before the First World War, he interactions with her family and friends, and her blossoming romance with Roland Leighton (Harington). Vera is however fiercely independent and fights against expectations and opportunities to attend university. These plans are dashed however when the war breaks out, and all her male loved ones, including Roland, rush off to enlist. She herself takes the difficult step of enrolling as a nurse.

The period-focused, class-focused film now switches from what you might expect, and becomes a shocking display of the cruelty of war, and how Vera must face it as she learns to treat both British and German soldiers who are suffering from the most incredibly awful injuries and pain. Vera Brittain in real life became a world famous pacifist, and in many ways, Testament of Youth is designed to show how that process took place. And it really is no surprise why.

The film maintains a constant focus on Vera, creating a feminine gaze into the events, which is unusual enough for such a topic. I was very pleased I watched Testament of Youth, both for the style and characters it presented us with, but also for shedding light on what was indeed an awful period in recent history, and bringing it to life in such shocking but honest detail.