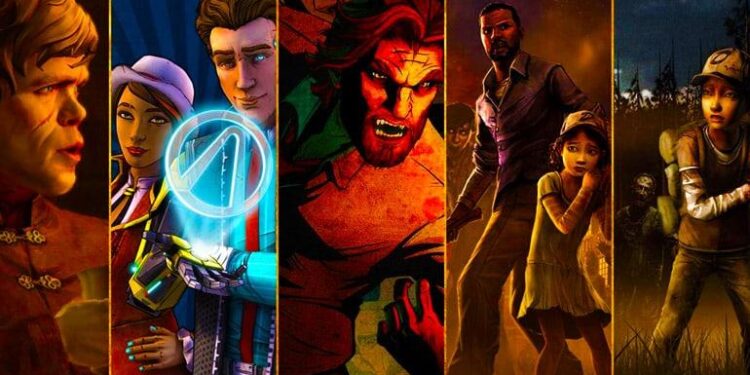 Chances are that when you hear the name Telltale Games, you marvel at how they somehow did justice to one of your favourite franchises. Whether it’s The Walking Dead, Game of Thrones or The Wolf Among Us, Telltale has made its name on great adaptations of existing properties.

With such a strong record, it’s always exciting to see what books or movies Telltale are tackling next. Here’s our wish-list of things we’d like to see on their slate. Star Wars has always been the major sci-fi property with all the luck in game adaptations. Star Trek, less so. It’s about time that Starfleet get its benchmark game. Slower and more cerebral than Star Wars, Trek lends itself well to Telltale’s signature style.

Just as in the TV shows, questions of morality and philosophy would play a central role in a potential Star Trek game. The Alpha Quadrant would make a fine backdrop to explore issues like factionalism, cultural relativism, the price of peace, and of course the Prime Directive.

Which Trek fan hasn’t wished they could be Captain Sisko or Jean-Luc Picard?

Maniac Mansion / Day of the Tentacle It’s easy to forget that the company most famous for delivering emotional gut punches in a zombie-infested wasteland got their big break with a zany point-and-click about a fedora-wearing dog and a hyperkinetic rabbity thing. The studio’s come a long way since rebooting the Sam & Max series, and is more than equipped to bring us the Day of the Tentacle sequel we deserve.

With a stacked group of Lucasarts designers in the Telltale stable, there’s no better studio to take on the further adventures of Bernard, Purple, Dr Edison and co. While Sam & Max was a fairly traditional adventure game, a potential Maniac Mansion sequel could take its cue from the original games and experiment with the adventure game format.

We’re drooling at the thought of the cartoony DoTT style rendered in modern 3D graphics a la Tales of Monkey Island. The response to the X-Files revival proves there’s still a desire to see Mulder and Scully shine their overly large flashlights into weird little corners. Wouldn’t it be great to have a tie-in game as well?

Forget the conspiracy. The show’s best moments tended to come from its monster of the week episodes rather than those dealing with the Byzantine alien mythology. If Telltale could capture the spirit of one of these episodes, and there’s little reason to think they can’t, it would be a must-play for fans of the show. Telltale already took on one fantasy giant with Game of Thrones, but would it be able to do justice to its equally popular polar opposite? We’re not entirely sure, but the thought of playing through a procedural set in the streets of Ankh Morpork is certainly intriguing.

Telltale excels at character moments, and for all of Discworld’s wit and imaginativeness, it’s always been about the people and the changes they go through. The likes of Vimes and Granny Weatherwax may be just too well-realised to be protagonists, but a new witch or Watch recruit would make for a great viewpoint character whose destiny you could shape. What would a Batman game without Batman look like? We reckon a gritty crime drama where the men and women of the Gotham PD must try keep DC’s most dangerous city safe with only their wits and resolve to guide them. In other words, Gotham Central: a setting that plays straight into Telltale’s strengths.

A Gotham Central game would share many of the features that made The Walking Dead game so good: tone, strong characterisation and a compelling sense of moral ambiguity. The decision to focus on Gotham’s side characters rather than Batman himself would allow the writers space to really breathe life into the narrative.

Sure, it’s more likely we’d see a video game version of the TV show Gotham than we ever would Gotham Central, but that doesn’t mean we can’t dream about it. Yes, we love Telltale for its interactive story-telling, but that doesn’t mean we wouldn’t be up for a good old-fashioned adventure game. A Tintin game would put the difficult moral choices on the backburner in favour of well-designed puzzles.

The premise would be straightforward. You’d go around the world solving mysteries and meeting the colourful Tintin cast in the process. It would be the spiritual successor to Broken Sword, one of the classic adventure games of the ‘90s.

When it came to graphics, Spielberg’s Tintin movie was a little too photorealistic. A Telltale version might better be able to translate Herge’s distinct visual style into 3D.

There already exists an excellent Vampire: The Masquerade game out there in Bloodlines, so go play that if you haven’t already discovered the joys of talking to stop signs. That doesn’t mean that there isn’t room for more gothic goodness. The World of Darkness is a rich well from which Telltale can draw stories.

Unlike Dungeons and Dragons or any of the other major tabletop RPGs, The World of Darkness has always emphasised role-playing above role-playing. Your decisions, loyalties and how you handle your inner demons are the driving force of the system.