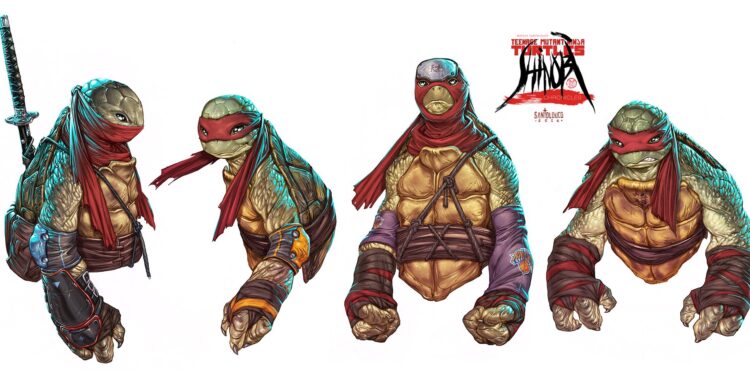 I did this mainly 4 fun at the beginning but the idea evolved to a full concept and I decided I was going to offer it as a comicbook miniseries. I've wrote a pitch proposal, created a logo and even presented part of it to my editor at IDW in a casual meeting at SDCC. (Part 2) pic.twitter.com/loXyfYL6Db


He liked the concept but there were other plans for the Turtles' books in motion at the time. Long story short, I guess is fair say that work and life got in the way, and I ended up not pursuing this project. (Part3) pic.twitter.com/PlLG7CACwX

As you can see from the images above, the four brothers no longer sport their famous colours. Instead, Santolouco’s Teenage Mutant Ninja Turtles only wear red headgear. Their costumes vary in other ways. Michelangelo, Leonardo and Donatello wear orange, blue and purple arm gear, while Raphael remains pretty much the same. The real difference between the four, however, are their weapons and, most probably, their attitudes.

The characters also have a more mutant look (which includes elongated arms and oversized claws), and actually resemble real-life turtles (with scaly skin and beaked mouths).

Even though Mateus offered the artwork as a pitch for a new comic book miniseries to IDW, it seems that it was rejected there too.

With 2016’s Teenage Mutant Ninja Turtles: Out Of The Shadows failing at the box office, and not likely to produce any more sequels, it might be a good time for another reboot. The honest truth is that the pizza-eating, ninja-fighting Turtles still hold a special place in their hearts of fans across the world.