When there’s something strange in your neighborhood who you gonna call? Well, if the new figures from Playmates Toys are anything to go by, it seems you call the GhostBuster Turtles or Teenage Mutant Ninja Busters? I don’t really know what to call these new figures.

Many moons ago, three years to be exact, the Teenage Mutant Ninja Turtles teamed up with the Ghostbusters in an IDW comic miniseries. It has recently been announced that the two iconic groups of 80’s heroes will once again get together, eat some pizza and bust some ghosts.

To celebrate this upcoming event, Playmates Toys will be releasing what can only be described as a mashup between the Turtles and the Ghostbusters. Each of the figures will be packed with a translucent ghost.

Now, while I’m not really sure what to make of these, I do know that for some strange reason I probably have to get them. After all, what can be cooler than mashing up two of my favorite franchises into one?

What do you think, are these figures cool or abominations that should never see the light of day? 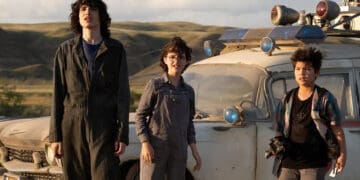