Home > Movies > Teen Titans Go! To The Movies Review – No, It Isn’t Deadpool For Kids

Teen Titans Go! To The Movies Review – No, It Isn’t Deadpool For Kids Teen Titans Go! is a divisive franchise. It replaced Teen Titans, one of the best DC animated series of all time, but it’s been a huge hit for Cartoon Network among the younger audience. Perhaps that’s the important thing to keep in mind: The target audience. And Teen Titans Go! To the Movies is likely to be a massive hit in that demographic. The premise of the film is simple: Robin wants his own superhero film since he’s tired of being seen as a sidekick. However, the Teen Titans are seen mostly as a joke by the other heroes, so they devise a way of being seen as more heroic. Part of their plan is to find their own arch-nemesis, who ends up being Slade, aka Deathstroke (but that name isn’t used because it’s a little too dark for kids). Naturally, there’s a twist or two as the Titans learn that friendship and being yourself is more important than your own superhero film.

From an animation perspective, there’s a combination of styles used. The predominant one is the cartoony version utilised by the main series. In the flashbacks and trailers of other movies, we see other designs, including Batman: Th Animated Series. It’s easy on the way, staying true to the source material and bringing a sense of familiarity. 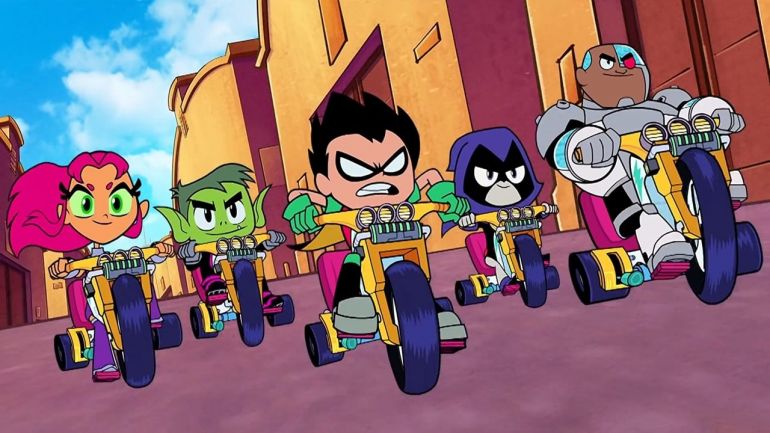 The voice acting proves to be outstanding here as well. The main cast from the series returns, while the additions of Will Arnett as Slade and Nicolas Cage as Superman are inspired choices. Arnett, as usual, proves that he’s one of the best voice actors in the biz and hams it up for Slade’s extra-evil side and mind-manipulation scenes. Cage’s Man of Steel also gives a look at what might’ve been had Tim Burton’s Superman Lives project come to fruition. While it might sound ludicrous, he portrays the Big Blue Boy Scout splendidly, showcasing a deep understanding of what makes the character so relatable.

As mentioned, the story in Teen Titans Go! To the Movies is simple. You can call the twist from a mile away, but there’s a valuable moral lesson here. What carries most of the film is the Titans’ sense of humour and in-jokes about the superhero genre. When it parodies the DC and Marvel universes, in particular, it’s on fire. It isn’t afraid of making fun of things that fans have criticised the superheroes for – such as how Superman’s greatest weakness isn’t kryptonite but Lois Lane, who’s always in a bind.

That said, the toilet humour segments fall flat. Yes, kids will laugh at fart and poop jokes, but it does get repetitive and stale here. This applies to a lot of the other jokes in the film as well. There’s a tendency to repeat a joke over and over again. It gets tiresome after a while and you do find yourself screaming, “Okay, we got it the first time.” Even the children in the cinema stopped laughing at the repetition of gags.

I read a review that suggested Teen Titans Go! To the Movies is Deadpool for kids – that’s a bit of a stretch. There’s nothing revolutionary about this, nor will it change animated or superhero films. Make no mistake: It’s fun and enjoyable, for both children and those young at heart, but it isn’t a gamechanger. If you’re a fan of Teen Titans Go!, you’ll love it. If you aren’t, this is unlikely to change your mind.