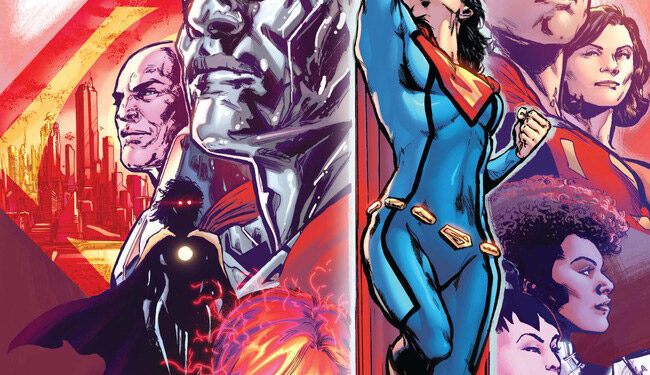 This is where things start to get weird. Of all the titles DC has relaunched, rebooted and refreshed, Superwoman has to be the most bizarre. There’s been very little hype about it, and this isn’t exactly a series people have been crying out for. There have been stories in the past where Lois Lane gained superpowers and tried out the superhero lifestyle for a short time, but this time it’s permanent. Or is it? [dropcap]T[/dropcap]elling the tale between flashbacks and the present, Lois asks Lana Lang for help in teaching her how to be a superhero. Just because Lois has powers, it doesn’t mean she knows how to use them. While Lois as Superwoman might be in the public eye and gaining a following, one man who’s still out to prove he’s the new Superman on the block is Lex Luthor.

When his new battle cruiser, the Gestalt, appears to come under attack and his power suit mysteriously loses power, it’s up to Superwoman to save the day. At least, that’s how it appears. The problem is that Lois still hasn’t got the experience needed to do the job properly, and there’s another Superwoman on the block – Electric Superwoman Red! Toss in a mysterious-yet-familiar villain and the potential death of a lead character right out of the gates, and you’ve got a real cliffhanger!

The good news is that this isn’t bad. It’s got enough action, adventure and story to make it a pretty solid read, and at times even resembles the spirit of the Superman comics from the 1990s. Lois as Superwoman looks pretty handy, and Superwoman Red is a shocking and intriguing addition. Lana Lang comes across better than she has in a long time too, and for her fans they’ll be pleased to see the fiery redhead they know and love. The problem is that there almost seems to be too much going on and for new readers it may be a confusing. Lex Luthor’s moments come across as unfocused, and it’s hard to know whether Lois and Lana are supposed to be friends or not – or indeed why Lana would bother helping Lois at all. Superwoman Red might be a fun addition and a great homage, but it may also send some shivers of concern through long-time readers who could worry that they’ve seen it all before.

It’s easy to assume that once this series calms down a little it’ll improve. The plot is intriguing, and Phil Jimenez does a great job on double-duty as both writer and artist. There’s some real potential based on how reminiscent this is of some of the better comics of previous runs. However, as an introduction to a new series it still feels a little rushed and the flashback sequences feel jumbled. Whatever happened to telling a story in a simple, straightforward, chronological fashion?

Give this a whirl and you may enjoy it. There’s a lot to like, but there are some flaws too. So be warned, and make up your own minds as to whether this is one worth following.