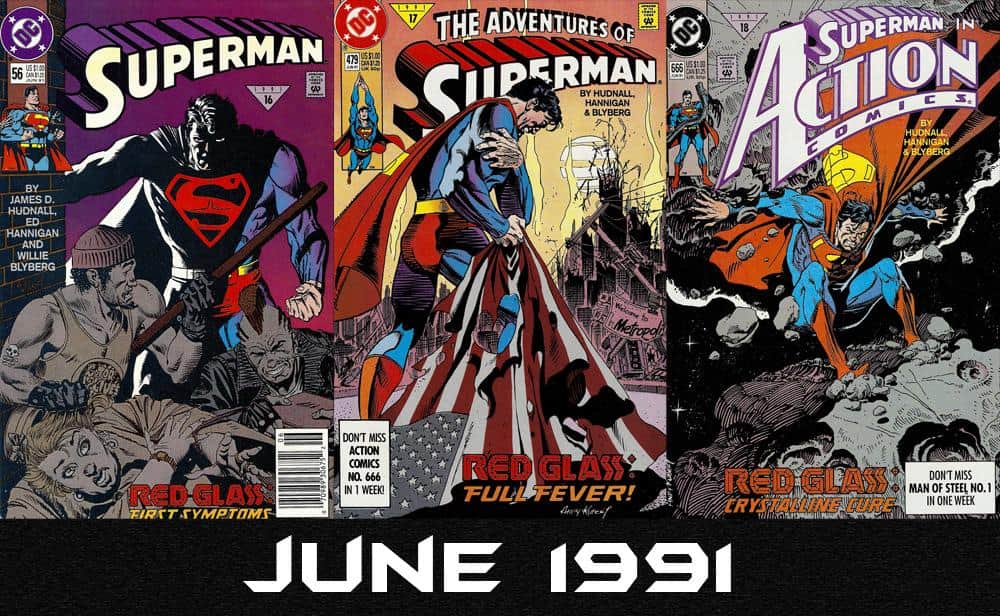 The Superman – Red Glass trilogy – split between Superman #56, Adventures of Superman #479 and Action Comics #666 – was one of the coolest tales out there. And all credit has to go to the creative team of James D. Hudnall, Ed Hannigan and Willie Blyberg. 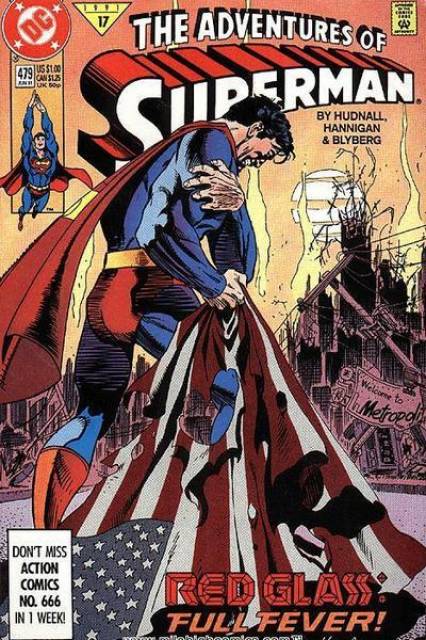 Every comic book fan’s collection has to start somewhere. Sometimes it’s with an award-winning graphic novel or trade paperback, other times it’s a single issue with a torn cover somebody gives you. My own collection started around 1980 with a Batman/Superman team-up where they fought Composite Superman, an issue of the Justice League of America, a New Teen Titans story and an issue of The Flash which I didn’t understand at all. They were a gift from my father, and they became my prized possessions at the time. Since then my collection has grown, as every fan’s collection usually does.

In going through the many overflowing boxes of comics I have now, some stories stand out more than others. They may not have been the best and many you’ll only find in back-issue bins, doomed to never be reprinted in collections. But they’re still wondrous to me for some reason. They’re the stories from the vaults, and if you can find them then maybe they’ll mean something to you too. Superman – Red Glass begins simply enough: Superman flies over Metropolis and spots an elderly woman being mugged. Naturally, he lands and tells the muggers to surrender. The muggers, terrified, plead with Superman to not kill them, and even the old lady runs off in terror at Superman’s appearance. Superman doesn’t understand what’s happening and tries to explain how he doesn’t kill… only for his words to hit such a high pitch frequency that he kills the muggers accidentally.

Superman’s confused, much as most of the readers probably are. Next, Superman goes into a museum dedicated to all the villains he… killed?! Superman senses it’s all a fake, only it isn’t. He’s slaughtered almost every major villain out there and paralysed Lois Lane. He tries to get answers but winds up accidentally killing Lois with his heat vision. Oh, and he bankrupted Lex Luthor. The only person who can stop the confused, mass-murdering Man of Steel is… Jimmy Olsen, armed with kryptonite?!

Before you know it, a baffled and enraged Superman has levelled Metropolis, killed the Justice League, obliterated the Doom Patrol, and pretty much wipes out all life on Earth. So what’s going on? We know there’s something very wrong here and so does Superman, who protests his innocence even as he continues to kill people. And he just doesn’t stop. 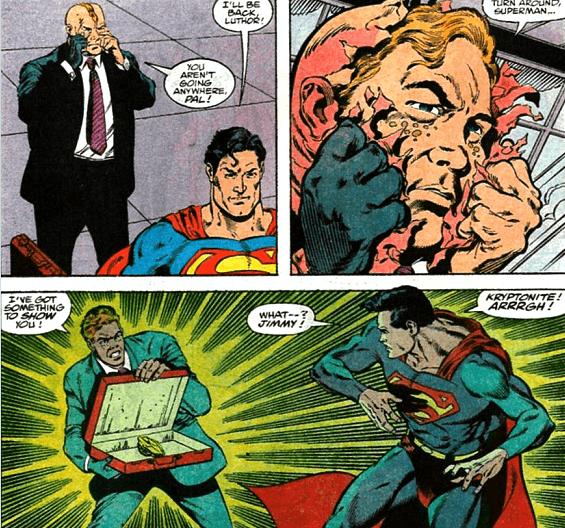 Obviously, it’s one of those pesky imaginary stories. Sort of. Yet this isn’t an Elseworlds story or some illusion created by a villain, or even a What if? It isn’t a dream either, technically. In school, one of the things kids hear most from English teachers is to never end a tale with “And then I woke up, and it was all just a dream.” While the actual ending to this story isn’t that far off, it’s presented in a way that’s Superman through and through – which makes it completely forgivable.

The impact of Superman – Red Glass lies in how much we trust that Superman would never do anything like this. It’s a mystery because we know it has to be wrong, it just has to, but there’s still a small nagging doubt at times that he may have done it. We know it’s possible that he could, but it’s up to us to keep believing that he wouldn’t. The art is as good as the story, presenting some disturbing images but never revelling in the carnage, and it never feels rushed.

This may not have been the best Superman story ever, but it’s an eerily haunting one. The power of it comes from how much faith we have in Superman that he simply would never kill, that he always does the right thing. Times and attitudes may have changed with the Man of Steel recently, but Superman – Red Glass is a story which asks just how much we believe in him.