The Biggest Superhero Deaths Of All Time 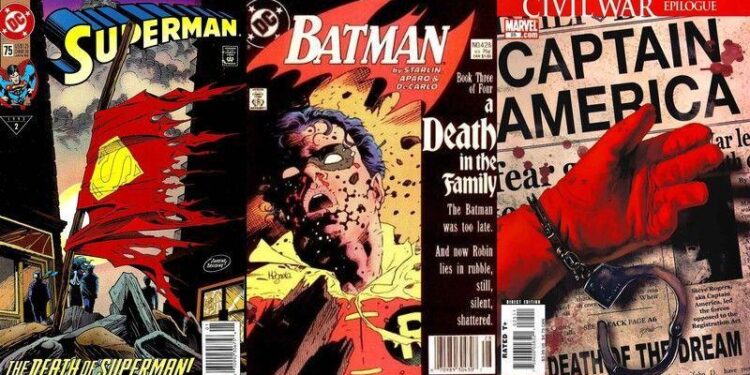 Here we take a look at some of the more interesting superhero deaths over the years.

Nobody is immortal it seems. Not even our favourite comic book characters. With a flick of a pen and a brush of a pencil, they can disappear off the shelves of our comic stores. Like soap operas, however, death in comics are hardly ever permanent and we soon find our heroes resurrected to fight the good fight once again. No, I’m afraid the world of comics is not completely immune to bad script writing and writers often write themselves into a corner. And after hundreds of issues, the only logical step would be to off the character and develop them from scratch.

In Chapter Five of the X-Men: Second Coming storyline, Rogue fights Bastion, a hyper-advanced Sentinel. When Nightcrawler comes to her aid and teleports in between the two, he is subsequently impaled on Bastion’s arm. Mortally wounded, he teleports Rogue and himself back to Utopia. On arrival, he dies. Despite being one of the most devastating deaths, the storyline was met with praise from comic fans, who believed Nightcrawler died appropriately and for the right reasons.

Final Crisis #6 – The Death of Batman The Dark Knight finally meets his end when he comes face to face with supervillain Darkseid in the finale to Grant Morrison’s Final Crisis. He is struck by an Omega beam and dies. Well, not really. The beam sent him hurtling through time and give rise to a new story arch, Batman R.I.P. Ultimately, Batman survived, but for a brief moment in time comic book fans saw a mortally wounded Caped Crusader.

Ultimate Spider-Man #160 – The Death of Spider-Man When Spidey faces a Sinister Six determined to kill his loved ones, Peter must bring down Green Goblin once and for all. After being shot by the Punisher, Parker dies from his wounds. Miles Morales soon took his place as Spider-Man. The mixed race webslinger was a hit with fans and the character has gone on to headline Ultimate Spider-Man.

Crisis on Infinite Earths – The Death of Barry Allen DC’s Barry Allen, who was The Flash since 1956, died in 1985′s Crisis of Infinite Earths while protecting Earth from the reality-erasing Anti-Monitor. Allen went out like a true hero. Following his death, Wally West continued as The Flash for two decades. Of course, the character was later revived in Final Crisis and is back at the mantle in DC’s New 52.

The Death of Superman Perhaps the most famous, Superman’s death in 1992 sent shockwaves through the world. The oldest and arguably greatest superhero of them all found himself at the wrong side of a fight when he took on Doomsday in the comic written and illustrated by Dan Jurgens. The news received international media attention and the whole world felt the loss of a comic character. Of course, like Stephano in Days of Our Lives, Superman returned after recovering in the Fortress of Solitude. In 2007, Captain Rogers gets shot outside a courtroom by a sniper (Crossbones) in the back of the neck through the throat and then three more times at point blank range by a mind-controlled Sharon Carter. Later it’s revealed that the character was sent through time and was still alive. Bucky, aka The Winter Soldier, replaces him as Captain America until his return much later in Captain America: Reborn. Captain America Vol. 5 #25 was the highest selling comic of March 2007 with preorder sales of 290,514 which was double the sales of the Mighty Avengers #1 in the same period.

Death in the Family – The Death of Robin (Jason Todd) One of the most controversial comic books of all time shows the Joker beating Robin to near death with a crowbar. Jason Todd was never a popular character and fans wanted him out. DC then set up two phone lines for fans to decide the character’s fate. The result was Jason receiving the death verdict 5,343 votes to 5,271, and Jason died in the explosion. Of course, he wasn’t all that dead either and later returned as Red Hood.

There are many other notable deaths…