By now it may seem like I’m picky about just what kind of a home I’m after. Big-screen TVs are good, but robotic butlers scare me. A skyscraper is nice but expensive, while a run-down home in San Francisco that comes with its own torture room is just too much of a unique fixer-upper opportunity. A giant gold key for the front door is terrific but living in the Arctic makes doing the shopping a problem. But what about a place with some style, some personal flair?

Welcome to Danny the Street, occasional home of the Doom Patrol.

Or at least it was until it evolved into Danny the World and then got demolished and became Danny the Brick. Oh, then it went through some more turmoil and may just have become Danny the Alley. Or maybe not. Rumour has it, it was nearly up for membership in the Green Lantern Corps at one point and would have used the name Street Lantern. But here we’re looking at the good old days when he was still Danny the Street.

Before you get the wrong impression, Danny is indeed a home – for both superheroes and “normal” people alike. The Doom Patrol hung out there for a while, even though they also occupied a part of the Secret Sanctuary cave next door to the Justice League so that The Chief could keep up his secret (and villainous) experiments. But Danny was a cool place to hang out. And yes, Danny’s alive… 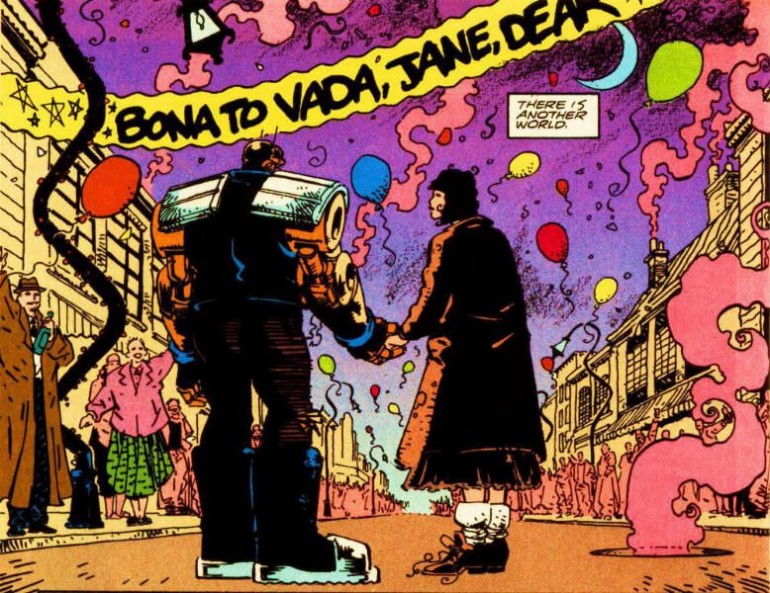 See, the thing that you’ve got to understand about the Doom Patrol is that they’re weird. From battling brains in jars to LSD bicycle-riding Dada-ist abstract beings, from making the Pentagon round to having multiple personality group therapy sessions, they’re off the charts abnormal. When even your own team’s manifesto dubs you “freak” you know things are going to be different. They didn’t do things the normal superhero way and Danny reflected that perfectly.

What does a transvestite street even look like, you may well ask. Well, all down Danny the Street are homes, stores and even gun shops… but they’re all rather decorative in nature, with frilly lace curtains and flowers in the windows. He’s also got a cabaret running almost constantly where it’s possible to see cross-dressing military figures belting out Shirley Bassey songs. You may not like it, but there’s always something happening on Danny the Street.

He also speaks, communicating through messages on street signs, banners, re-arranged shop logos and even steam rising from manhole covers. Unfortunately, if you’re not familiar with the camp-like slang known as Polari then you may not understand him. Me, I grew up listening to the adventures of Julian & Sandy in the radio show Round The Horne, so I have no problems with vada-ing his fantabulosa smoke through my oglefakes.

Danny doesn’t mind who lives there either. There’s no rent to be paid and he lets complete strangers wander in and out all the time. There’s no waiting list, lots of space and entertainment isn’t a problem. It matches the Doom Patrol in weirdness and it has a sense of style. What more could anybody want, even if it is a little quirky? Scratch that – it’s a lot quirky, maybe too much sometimes.

What about that pesky problem that Superman’s Arctic home has? Is it a long way from the shops when you run out of milk? Hardly. In fact, it’s totally the opposite. See, Danny the Street has a party trick up its sleeve (or pavements) that other bases wish they had:

No, it doesn’t have teleporters like the Justice League. It actually teleports itself, instantly and to anywhere in the world (or beyond). Even more amazingly, reality actually shifts to accommodate wherever it appears. So if it suddenly decides to appear between two houses, they shift apart temporarily to accommodate this new street and then rejoin once Danny’s left to go on his merry way again. Because of this, anybody can wander in – anyone. And they usually stick around.

The problem with this is that Danny can also be a little unreliable. You may take a wrong turn in Johannesburg, wind up on Danny the Street, and then he’ll rematerialize and you’ll find yourself leaving in Beijing. The Doom Patrol never had this problem, but others might. Also, you may pop out to go to the shops and by the time you come back it’ll have disappeared and you’ll never see it again.

I like Danny the Street. It’s a cool place for a very odd group of superheroes to hang out. It represents their level of strangeness perfectly and has some amazing features that other homes and lairs should be envious of. It has a style all of its own. But would I live there?

No. Well, yes, but only temporarily. I like that it can teleport, it’s the ideal way to see the world and avoid people I could do without. I’ve definitely got to get a place that can do that. It looks like a nice place to be and everyone always seems to have a smile on their face or a song in their heart. I could do with that.

I just don’t know if I could live in a place with pink frilly lace curtains in the windows.