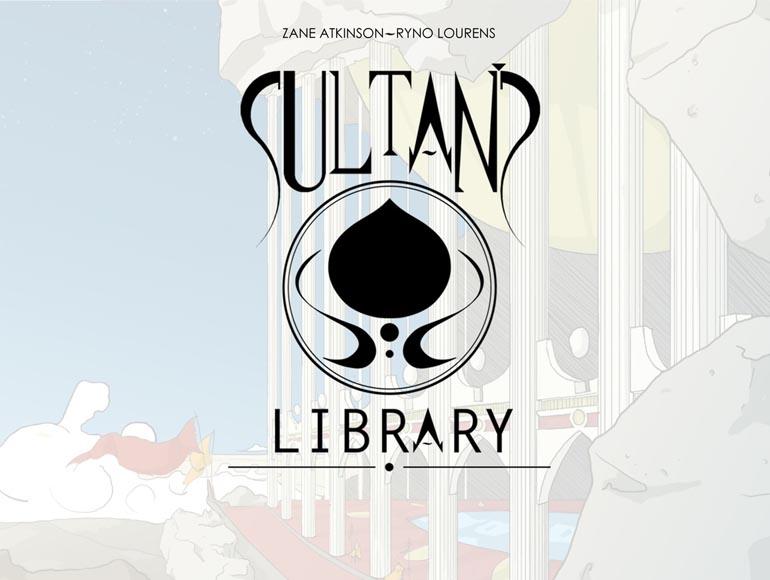 You have the honour to be chosen as the Sultan’s envoy. As his envoy, you have been assigned with recovering books from far across the vast desert and returning them to his great library. Will you be the one to return with the rarest and most valuable of these books?

For a few months now I have been hearing about the Sultan’s Library card game designed by two South Africans, Ryno Lourens and Zane Atkinson. I was fortunate enough to receive a print and play a copy of the game to preview. 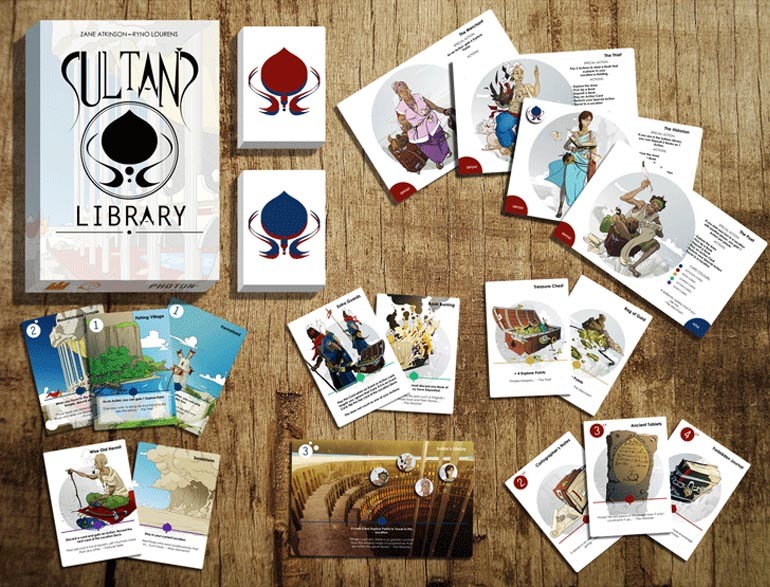 The game casts you in the role of one of the Sultan’s newly appointed envoys. Players can choose from one of 4 envoys; The Historian, The Thief, The Poet or the Merchant. Each of these has their own special ability that can be activated on their turn. It was great to see that the abilities fitted thematically with each character. For instance, the Thief can steal a book that a player in his location is holding (to the dismay of the other players).

The game has two main decks; the location deck and the action deck.

The location deck consists of location, event and book cards. Each location card has a value attributed to it, as well as an effect that occurs in that location. The value on the card indicates the amount of explorer points needed to explore that specific location. The event cards trigger random events that could either be a benefit or a hazard to the player. Lastly, the book cards are what the player needs to collect in order to win the game. Each book has knowledge points assigned to them; these points are added up when the game ends.

The action deck consists of action and journey cards. Each journey card has an explorer point value assigned to it. These explorer points are used to explore the different exotic locations, and move from one location to another. Action cards can be activated during a player’s turn (some action cards enable you to interrupt another player’s turn). Theses range from burning a book that has been deposited by a player, to negating the effects of a player’s actions. 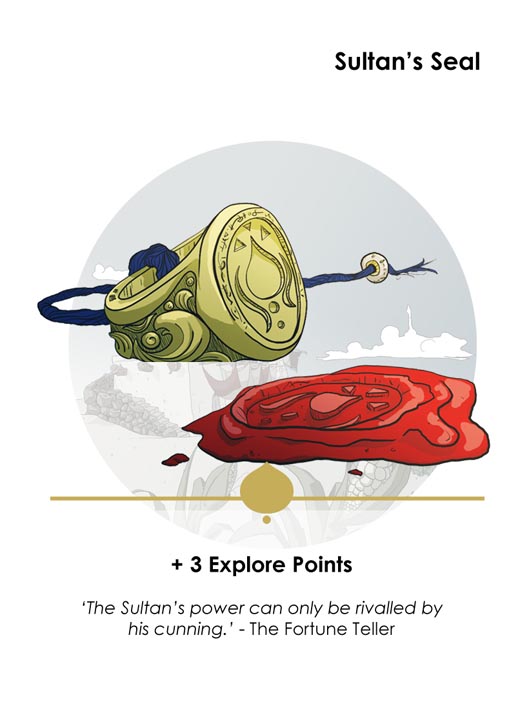 Once these decks have been set up and each player has chosen an envoy the game begins.

Obviously the Sultan, being a short man himself favours players with the same stature, therefore the shortest player receives the first player token (which inevitably I never get).

There are 2 phases to each player’s turn. In the first phase, the player draws 2 cards from the action deck. A player then has 2 available actions which they can use in the second phase to perform the following:

Pick up a book – Should there be a book in a location where a player currently is, that player can use one of their actions to place the book in their holding area (a player cannot hold more than 2 books at once).

Deposit a book – If a player’s character is holding a book(s) they can deposit it by using an action. A book can only be deposited when a player is in the Sultan’s Library (or unless otherwise specified by an action card).

Play an action card – A player can play any of the action cards that they presently have in their hand.

Travel to a location – Players can move to any face-up location by paying 2 more explorer points than is indicated on the card (any empty location cards are discarded).

Scrounge – By spending 2 actions, players can draw 1 card from the action deck. 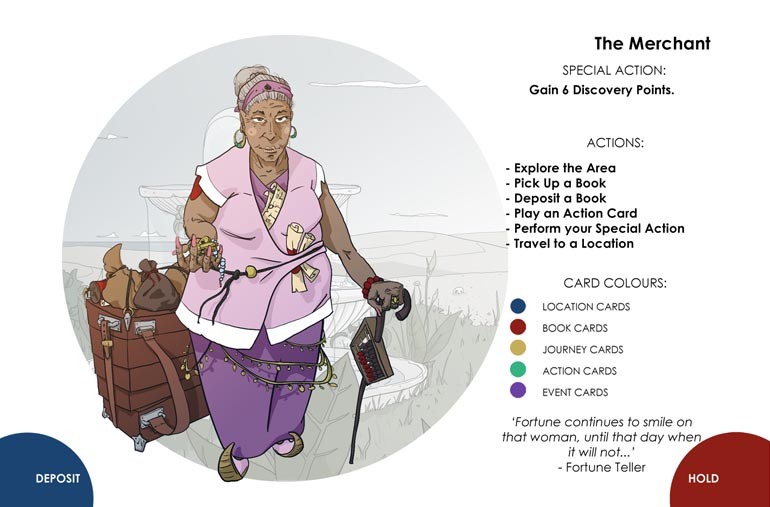 When any player has deposited 3 books in the Sultan’s Library, the game ends once that round is finished. The player who deposited the first 3 books does not receive bonus points. The other players receive 2 bonus points for any extra books they are holding and 2 bonus points if they end the game in the Sultan’s Library. The player with the most knowledge points wins the game and receives riches beyond their wildest imagination (basically bragging rights).

I have never personally been a huge fan of the Arabian theme when it comes to board and card games. Having said this, I think that the theme in Sultan’s Library fits well and really complements the game mechanics. The idea of exploring a deck and collecting books may sound dull, but I found that not to be the case. The game plays really quickly (between 15 and 45min) and because of the action cards the game can be quite brutal (in a good way). There were many times when I thought I might have the game in the bag when out of the blue a fellow player would play a book burning card, greatly reducing my confidence. I do think that it would be great if the final game had some more action cards (this is just nitpicking).

The game can be played with 2 to 4 players. Seeing as I play many of my board and card games with my wife I was pleasantly surprised to find that the game plays really well as a 2 player game.

I found the game easy to teach and people grasped the mechanics in no time. I was also happy to discover that although there is a definite element of luck in the game (drawing cards from a deck) there is also some strategy involved especially when it came to using the action cards. Deciding when and what action card to use can sometimes make the difference between winning and losing the game. As the copy I received was a print and play version I cannot comment on the quality of the final components. The artwork is good and design wise the cards are really easy to read and to differentiate (thanks to the fact that they are colour coded).

Overall, I was pleasantly surprised with the Sultan’s Library and everyone I played with enjoyed it.

The Kickstarter for Sultan’s Library will be launching on Tuesday the 2nd of June 2015 and will run till the 2nd of July 2015. So if you are looking for a fun (sometimes brutal), easy to teach (and learn) and quick to play card game, then go and check out the Kickstarter when it launches. More information on the game is also available on their website and prefundia page: