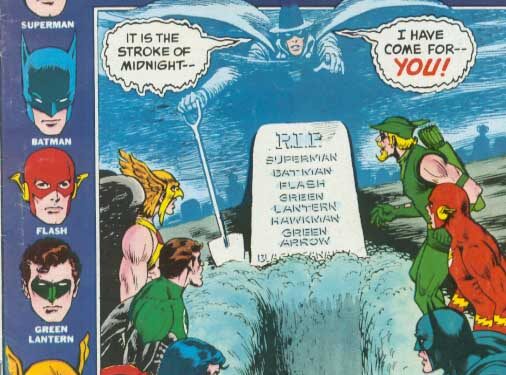 A Stranger Walks Among Us! is the Justice League’s issue of the Rutland trilogy from 1973. One of the first unofficial DC/Marvel crossovers (the other issues being in Marvel’s Thor and Amazing Adventures), it sprung from the real-life annual Rutland Halloween superhero parade and its founder, Tom Fagan. A superhero fan, Fagan helped establish it in 1960, with comic book creators attending regularly – and in costume. Fagan (who made a good Batman!) and the parade were featured in a variety of comic books, and Marvel Comics even named Rutland as one of the nexus points where DC and Marvel intersect.

Cosplay. There’s something about dressing up in costumes that’s just fun. As kids we run around with a towel draped over our shoulders, pretending it’s a cape and playing at being a superhero. On Halloween, people dress up to go trick-or-treating. Fancy dress balls and costume parties happen all the time. It’s little wonder that some fans dress up when they go to conventions, whether they be Trekkies, Whovians, Ringers or fanboys and fangirls. Dressing up can be fun.

When it comes to fans, the creators are amongst the most passionate. As a child, Alan Moore used to wear a mask, costume, and wellington boots, pretending to be a superhero. Paul Dini is such a fan of Zatanna that he wound up marrying stage magician and Zatanna lookalike Misty Lee. And then there are creators Len Wein, his apartment-mate Gerry Conway and Steve Englehart, who spent Halloween at the Rutland superhero parade in Vermont… along with the Justice League, Thor and the Avengers. In A Stranger Walks Among Us!, the mysterious hero the Phantom Stranger warns the Justice League that Felix Faust is on the loose in Rutland. Their deaths have been foretold, and he fears that his powers may not be enough to stop the villainous magician. Once he’s disappeared from the JLA Watchtower, the combined team of Batman, Superman, Hawkman, Green Lantern, the Flash and Green Arrow head off to Rutland and the Halloween parade to investigate.

Breaking the fourth wall completely, also heading into town are Gerry Conway, Steve Englehart and Len and Glynis Wein, who are keen to make a splash and hook up with their friend Tom Fagan… in spite of Steve’s car having a faulty muffler. Meanwhile, back in town, the JLA can’t find any sign of Faust and so they get roped into leading the parade – which is full of DC and Marvel cosplayers. However, it doesn’t take long for Faust’s plan to take effect.

Faust casts a spell for demons to inhabit various costumed fans, granting them the powers of their favourite superheroes in order to defeat the League. With the Flash being defeated by a shield-throwing red, white and blue super-soldier, Batman being incapacitated by a wall-crawling, web-slinging human arachnid, and a hammer-wielding Norse god dismantling other Leaguers, it’s up to the Phantom Stranger. The Phantom Stranger’s plan, bizarrely, is to steal the JLA’s equipment. But why? Of course, there’s more to it and he has a plan, managing to rescue the League and preventing their predicted deaths. In return, the JLA offer him League membership, although in his typically cryptic fashion he disappears before he accepts. As for Felix Faust, with his magical energies spent, he’s forced to steal Steve Englehart’s car to make a quick getaway. In an amusing twist, he’s soon arrested by the police… for having a faulty muffler!

A Stranger Walks Among Us! is one of those feel-good classic comics which offers a cheeky glimpse of DC’s finest taking on their Marvel competition, even if they weren’t allowed to admit it. It also continues the tradition of creator/character crossovers, with the adventures of Gerry, Steve, Len and Glynis continuing in the Marvel titles). It adds a wonderful “meta” vibe which even Deadpool would appreciate. The art by Dick Dillin is crisp and bold, while the dialogue is often hilarious, as witnessed with the “odd couple” arguments between Green Arrow and Hawkman.

A Stranger Walks Among Us! is forty years ahead of its time, and for the creators to tell a tale which pays homage to the costume-wearing fans out there and the events they attend is something truly special.