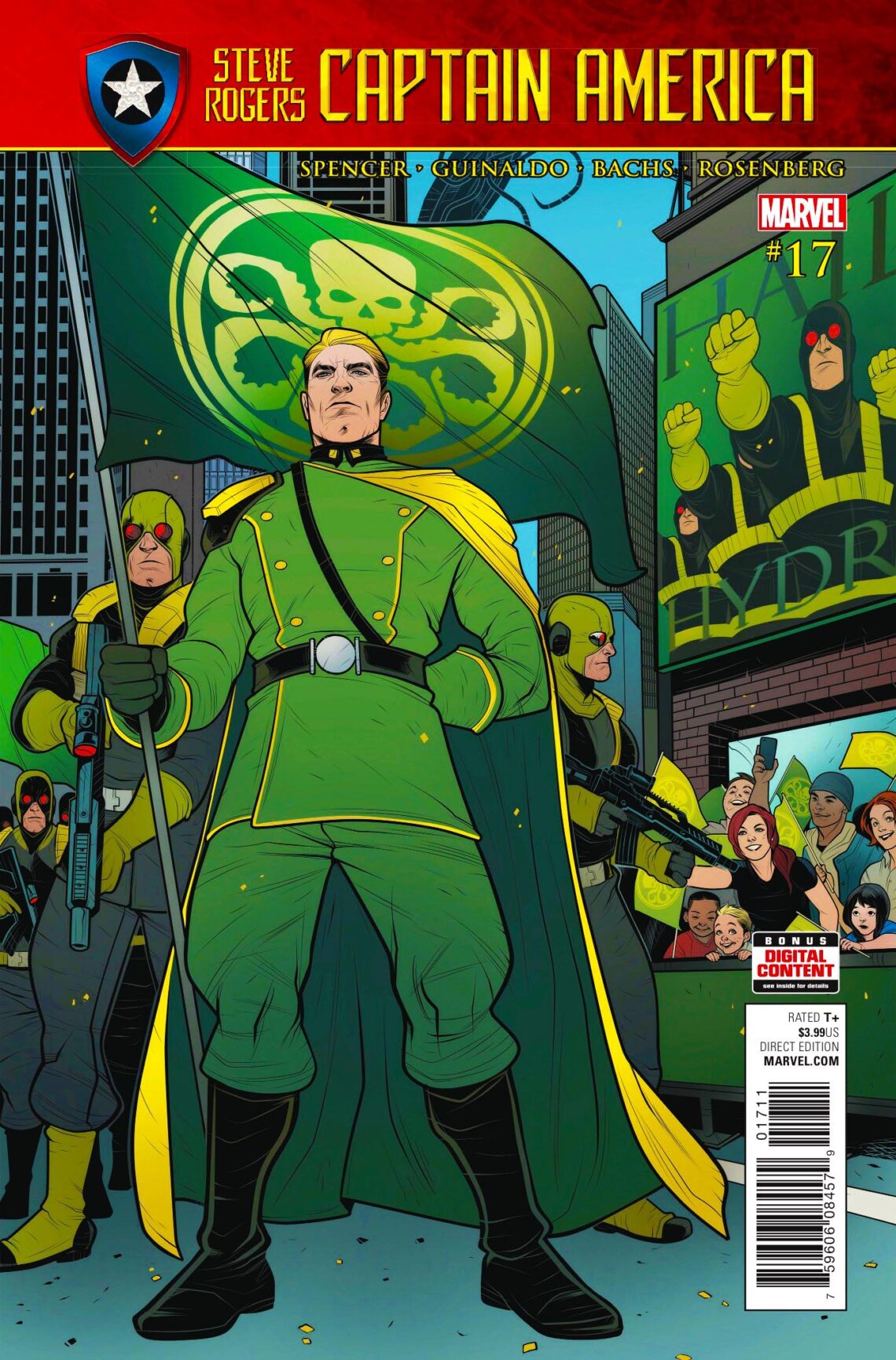 What’s the difference between real news and fake news? With the future of America and the world on the line, that’s the issue facing journalist Sally Floyd in Steve Rogers: Captain America #17. She’s been granted a rare interview with Hydra Supreme, Captain America himself… and the last time she interviewed him, she ripped him to shreds in the press. Now, with Captain America being a merciless dictator, she’s unsure of whether he’s going to hold herself – and the press in general – accountable. 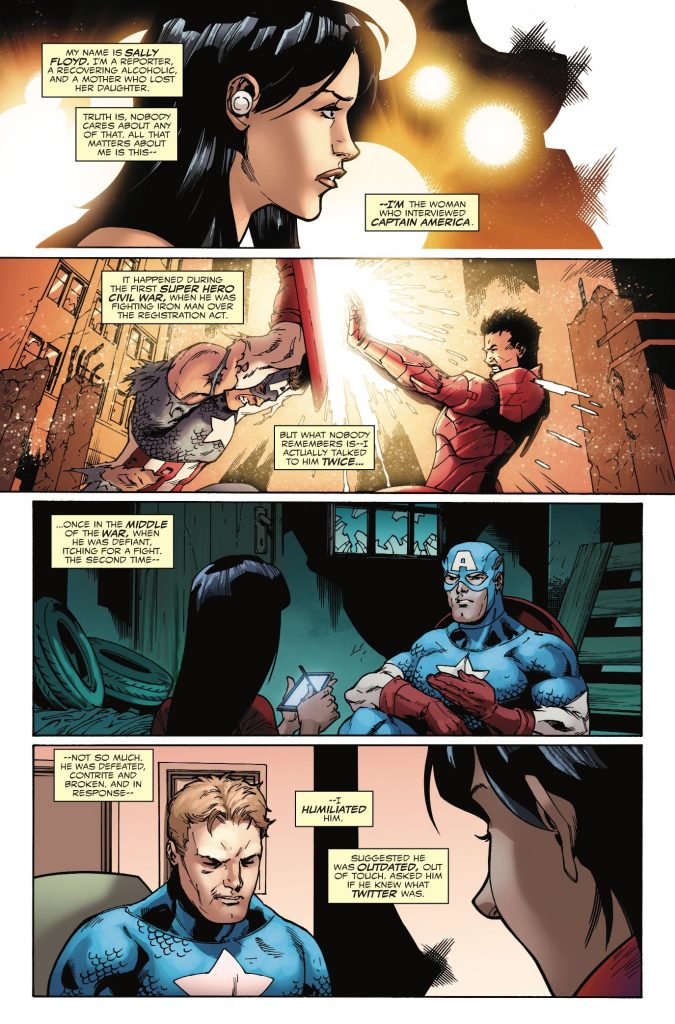 As topics get debated, the recent history of how Hydra has come to power so easily is explained – although not to her. While Captain America’s strategy to eliminate the superhero threat to Hydra has been explored before, the political machinations to remove the Inhuman and Mutant threats is examined. As for Sally Floyd, she’s about to learn that freedom of speech in the Secret Empire comes with a terrible price…

Once again the political allegory that is Secret Empire hits all the right notes, and while there are several topics presented here the two key ones are freedom of speech and “fake” news. It’s a timely topic, given the current ongoing battle between journalists and politicians, and pulls few punches in showing both sides.

It’s made clear from the outset that Sally Floyd, as a journalist, is subject to her own personal opinions. Her previous interview with Captain America became a personal attack on his character. It could easily be considered as clickbait journalism or “fake” news. But, as with most journalists, she still has an obligation first and foremost to the truth. With Captain America now in power, she’s warned to avoid a certain topic regarding Hydra – who are now keen to promote their own fake news. The door swings both ways, as the old saying goes.

Freedom of speech in an age of fascism is only permissible as a concept, and it’s explained how easy it is to sway people’s opinions when they’re scared and you’ve got a public platform. Twitter itself is both a podium and a battleground, and the difference between “real” news and “fake” news can be blurred at times – making it important to ask which side is really telling lies. 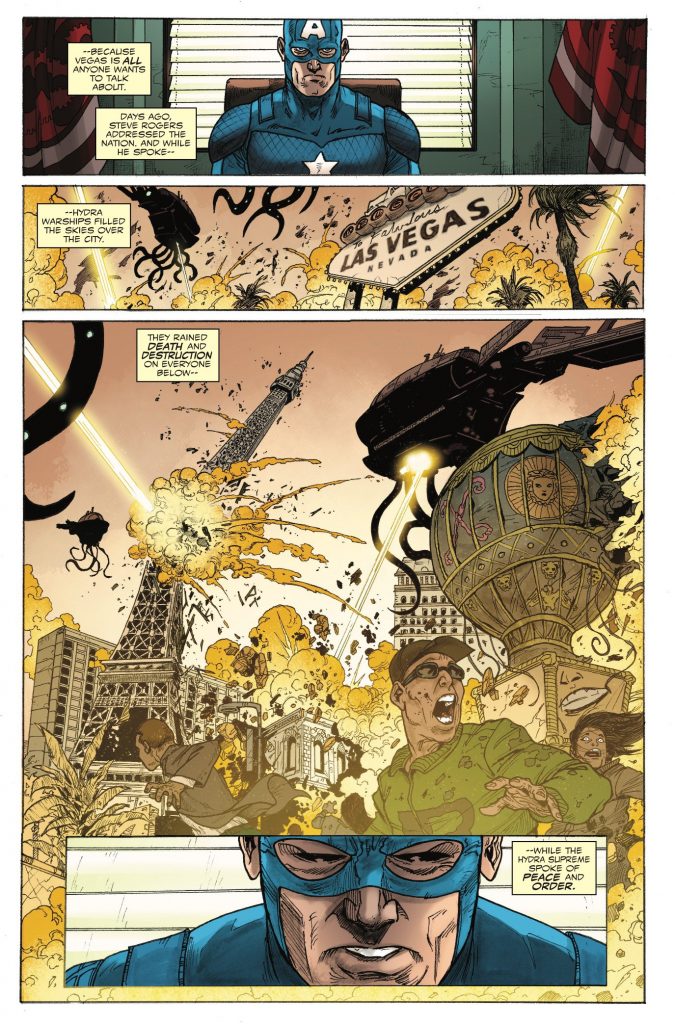 This terrifying vision of an authoritarian society is strikingly close to real world events, and once again writer Nick Spencer tells a compelling narrative. It’s a slow-burn issue, but all the better for it. The tension of the interview builds as it becomes a debate and then a war of words and ideologies, bringing to mind scenes from Frost/Nixon in its intensity until you know something has to give.

The artwork manages to convey just the right pacing to pull this off, while Captain America exudes a genuine level of menace, made more disturbing by his calm demeanour and use of light and shadow.

While some might be annoyed at the lack of quick-fix action or be appalled at the storyline, it’s still an incredible issue. The politics of it may be a bitter pill for some to swallow, but Steve Rogers: Captain America #17 is a topical, socially relevant tale and is highly recommended.