When Steep was first announced by Ubisoft I wasn’t quite sure what to expect. Would this be a game about exploring vast open mountainous terrain or competing in different challenges against other players? Well, the truth is that Steep is a bit of both, a jack of all trades if you will. The question is, does the game manage to master these different elements? [dropcap]A[/dropcap]fter being shown the ropes in a (very) brief tutorial, you are left to your own devices and encouraged to explore your surroundings. The game was developed by Ubisoft Annecy who are actually based near the Alps, and who tend to spend time in-between developing games hurtling down snow covered slopes. This passion for their surrounding does come across in the game as the environments truly look spectacular. Exploration is done by using one of four disciplines namely, snowboarding, wing suiting, paragliding, and skiing. What sets Steep apart from other snow based extreme sports games is that players can freely change between any of the four disciplines as they please when exploring their environments.

While exploring the beautiful mountainous vistas (modeled after the Swiss Alps) players will be tagging individual peaks using their trusty binoculars. Tagging these uncover events that players will be able to take part in against AI controlled opponents or, should they feel up for a challenge, human players. While on the subject of multiplayer, it is important to note that the game offers a seamless multiplayer experience and therefore needs to be connected online in order to work. Initially, I was amazed at just how many activities there seemed to be on this huge snow covered map. Most of these activities essentially boil down to racing, high score trick based challenges, endurance races, and expeditions. The game does offer a story mode which basically feels like a guided tour as the disembodied voices of the mountains (yes you read correctly) guide you through specific tasks. Weird, trippy story missions aside, Steep really nails the sense of high speed when hauling down a mountain slope, dodging trees and other obstacles. At its heart the game is an extreme sports simulator and each discipline mostly keeps true to its real live counterpart. The game does genuinely create the feeling of moving at break-neck speeds and that nervous feeling that even one wrong move can cause you to careen out of control and wipe out (initially this will happen a lot). As expected using the wingsuit to speed down a mountain feels truly exhilarating while, in contrast to this, paragliding is more of a relaxing task that I found aided me greatly in exploration.

Of all the challenges to choose from the endurance races and expeditions were among my favorite activities. Not just because these allow you to freely explore your environment and basically go where you want to, but also because I found Steep’s trick controls to feel sluggish and even inconsistent at times. There were quite a few moments where I lined myself up for the perfect trick and the unresponsive controls caused me to literally eat snow. It’s frustrating that Steep nails the feeling of speed so perfectly during races, be it wing suiting down a chasm or snowboarding/skiing down a terrifying slope, yet it is let down by inconsistent trick controls. 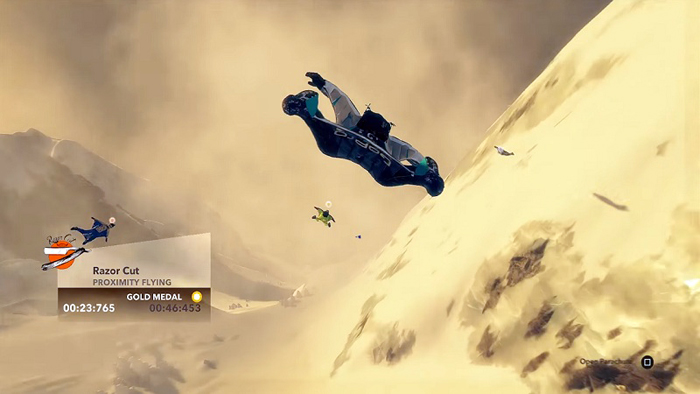 As the bulk of the game is made up of different challenges, most of which I enjoyed thoroughly, the game did start to feel stale after a while. I found this to be mainly due to the lack of any sort of progression system. Sure you do unlock new challenges and areas as you explore but, other than buying the odd piece of gear that makes your character look a little prettier there is not much else to keep you motivated.

Steep is a game that really needs to be played with (or against) others. It’s a game that shines the brightest when you find yourself careening down a slope with your friends (or foes) as you try to beat each others times trying your best not to slam into a tree in the process. 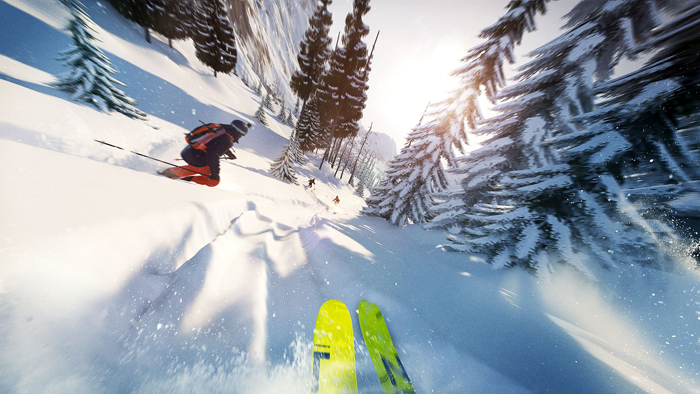 From the onset, Steep shows potential but gets tripped up by inconsistent and sluggish trick controls as well as a lack of a meaningful progressions system. The game does still have plenty of redeeming qualities. Multiplayer is loads of fun and speeding down a slope while weaving through trees against you opponents does feel exhilarating. Few games are able to capture the essence of speed so perfectly and Steep does this quite well. Exploration is fun. Each discipline feels unique and the environments are breathtakingly beautiful. If you have the patience and are willing to put up and look past Steep’s issues then you might just find a fun game with loads of potential.