Just when I thought we had covered everything Star Wars in the last two comprehensive books we reviewed (Star Wars: The Complete Visual Dictionary and Star Wars: The Ultimate Visual Guide), Dorling Kindersley drops the bomb on fans once again with another beautiful new tome to marvel about. Piecing together the full story, Star Wars: The Old Republic Encyclopedia is described as “The definitive guide to the epic conflict”, covering all the aspects around the ground-breaking 2011 massive multiplayer online role-playing game. Clocking in at a whopping 352 pages, this in-depth hardcover guide to the game, penned by several members of the Old Republic writing team, covers the full spectrum of characters, droids, vehicles, hardware, weapons, timelines, events and planets offered in the unique Old Republic world. 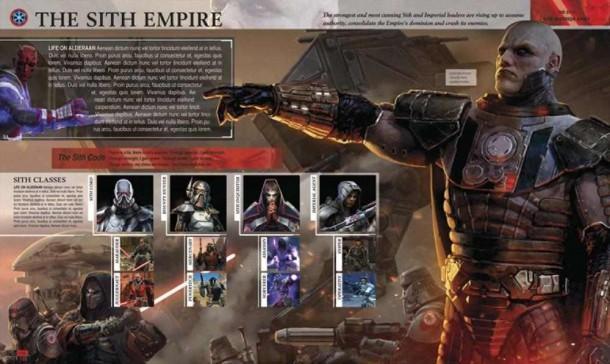 Over time The Old Republic has become one of the most popular Star Wars games of all time and its popularity has sparked off a number of comic book and novel series book tie-ins. This encyclopedia combines all the information and delivers a guide that goes beyond the realm of the game. As the author’s note explains, “The book is divided by factions, with each of the eight player classes found within their respective faction: The Republic (Republic Trooper), The Jedi Order (Jedi Knight and Jedi Consular), The Sith Empire (Imperial Agent), The Sith (Sith Warrior and Sith Inquisitor), Mandalorians, The Underworld (Bounty Hunter and Smuggler), and the Hutt Cartel. These faction sections are followed by comprehensive sections on Species and Planets.” 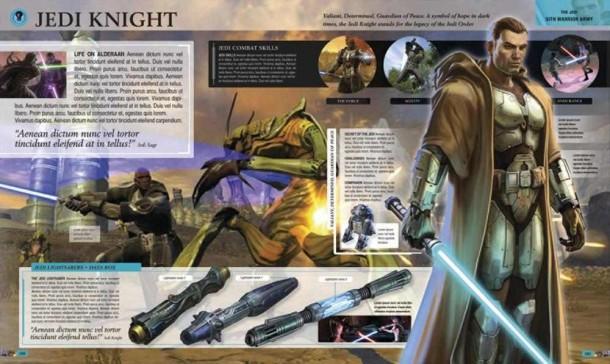 Dorling Kindersley is known for their great encyclopaedias and Star Wars: The Old Republic Encyclopedia is no exception. Thanks to the book’s vivid imagery, in-game images and stunning art (concept art, paintings, illustrations, and a lot of game stills), even readers who haven’t played the game will find it fascinating, while providing valuable insight to those who have. This visual dictionary chronicles everything and anything a reader could want to know about the universe. We’re introduced to characters like Darth Malgus and Shae Vizla with several biographies, before moving onto sections about the Empire, the Hutts, Mandalorians, Jedi and also the Sith. If that weren’t enough it also outlines the imperial and republic rank structure, as well as the philosophies and structure of the Jedi Order and ideologies behind the Republic and the Empire. Near the end, there’s a 24 page guide to alien species (18 pages for sentient species, 6 pages for non-sentient), a 4 page guide on droids (some familiar, some not), a 60 page guide to planets, and a two page teaser for the future of The Old Republic MMO.

All in all, this encyclopedia, created in collaboration with LucasArts, provides greater detail on the entire Old Republic era, a dark age over three thousand years before the rise of our beloved Darth Vader. If you’re a fan of the game, Star Wars or even just a lover of great art then Star Wars: The Old Republic Encyclopedia is worth picking up. Fans of the Old Republic rejoice! 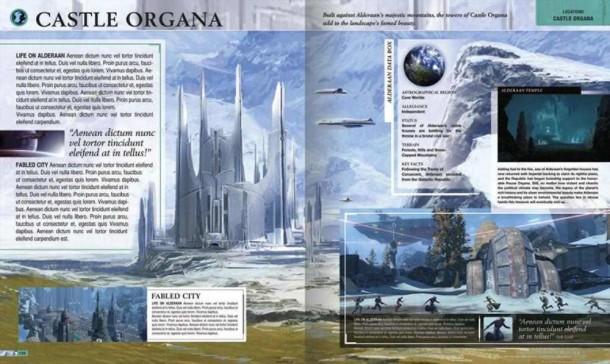