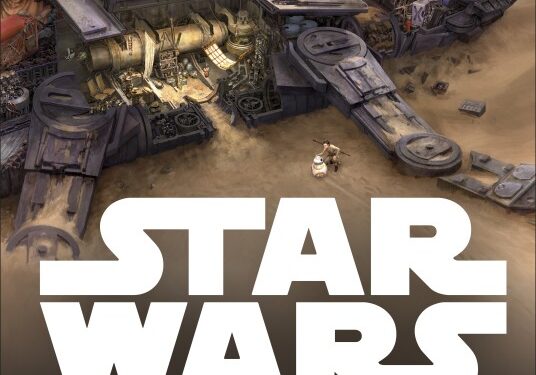 Part of the cool factor with Star Wars is just how big and immersive the universe is. It’s big enough to dedicate an entire 180-page encyclopedia to just the sets and locations. Over the years, I’ve collected a number of these Dorling Kingsley books (STAR WARS: THE FORCE AWAKENS: THE VISUAL DICTIONARY, STAR WARS: ABSOLUTELY EVERYTHING YOU NEED TO KNOW and STAR WARS: THE COMPLETE VISUAL DICTIONARY, to name a few) and I’m always struck by how detailed and well illustrated they are. Star Wars: Complete Locations is no different. It is another must-have canon reference book for fans by fans. Star Wars: Complete Locations is a canon reference book and a reissue of the 2005 edition of the same name, which now includes information from Star Wars: Episode VII The Force Awakens. Filled with cutaway images, primarily illustrated by Richard Chasemore, Hans Jenssen, and Kemp Remillard, and text by Kristin Lund (Episode I), Simon Beecroft (Episode II), Kerrie Dougherty (Episode III), James Luceno (Episodes IV-VI), and Jason Fry (Episode VII), the book somehow manages to make ‘the galaxy far, far away’ feel even bigger and more beautiful than before. It explores all the major locations from the franchise, from the luscious setting of Naboo to the inner workings of the AT-AT Rey now calls home. The book has it all and goes to great lengths to highlight every tiny detail in each setting location. To the average fan, Star Wars: Complete Locations would be considered too technical, but for avid fans it will finally bring clarity to some long unanswered questions. It’s also great to see that images from the films are added in. This helps with remembering exactly where and what took place. We are given geographical lessons on key locations, their planets, and a brief description of the setting’s importance. It really covers all the bases. You’ll feel overwhelmed with all the information. With the recent Disney takeover, a lot of the Expanded Universe have been ditched – it’s no longer canon. In its place is more details from The Force Awakens and some of the key landmarks in the new film. We get a better look at Jakku, the bleak desert planet we find Rey on. It also gives us the exact location where Poe crash landed and where The Millennium Falcon was being stored/hidden. The book, of course, doesn’t stop there. We also get a look at the Resistance Base, Maz’s Castle, and the Starkiller Base.

If you’ve read this far, you’ll understand that this is an essential purchase for any Star Wars fan. It’s just so beautiful and so detailed.