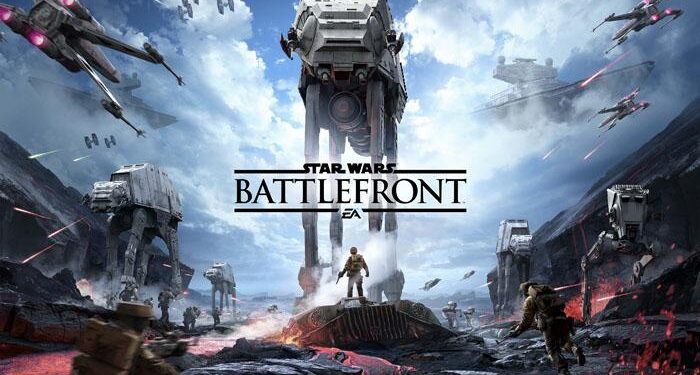 After playing Star Wars Battlefront I was reminded why I fell in love with the Star Wars universe in the first place. Every small detail from the movies are faithfully recreated in the game. From the screech of a TIE Fighter flying overhead to the breath taking environments, there is no doubt that Star Wars Battlefront immerses the player in every aspect of the universe.

I found myself noticing small details that reminded me of the films. For instance, the specific impact blaster fire makes when hitting its target. Battlefront looks, feels, and sounds like the original trilogy.

When it comes to gameplay, Battlefront has a limited set of maps and modes to play through, although more will surely become available in the future. Battles take place over 13 different maps on four distinct planets, each offering some unique gameplay opportunities. Endor is rich with sniper spots and areas to hide. Tatooine’s landscape is made up of labyrinth like crevasses allowing you to flank your opponents and catch them by surprise. Hoth consists of small crowded hallways which open up to wide snow swept areas. Sullust has a similar layout to Hoth albeit with more volcanic rocks and rivers of magma.

Although each map looks gorgeous and was different enough to feel unique, I do wish that there were more than just three planets, as I did find myself craving a change of scenery after a few hours of play.

Battlefront does not have a dedicated single player campaign instead players who want to go it alone (or local co-op) has access to Survival mode. This mode is wave based and pits rebel players against wave after wave of ever more aggressive Imperials. Each new wave forces you to change your strategy as new enemy types are introduced like Imperial troopers with jetpacks and the ability to turn invisible. I found Survival mode to offer a welcome respite from the more competitive modes.

Drop Zone is a quick and fast paced 8v8 battle for domination as players need to seize control of crashed drop pods. Each drop pod that players take control of earns them victory points, as well as one time consumable items that tend to come in very handy during these cutthroat battles. Taking control of a drop pod will initiated the next one, making the battles constantly shift from point to point. A step up from Drop Zone, Supremacy a 20v20 battle, encourages aggressive tactics in order to wrestle outpost control from your opponents. Supremacy offers players the option of using vehicles such as X-Wing fighters and AT-STs which raises the stakes drastically. This is where Battlefront truly starts to feel like entering a warzone in the Star Wars universe.  The combination of vehicles and ground troops ensures that tactics need to continually change. Being faced with an AT-ST while only carrying a blaster pistol can be a daunting situation, unless you were lucky enough to pick up one of the many power ups and counter measures that randomly spawn on the map. These include Smart rockets and Orbital strikes.

Supremacy also offers the ability to play as one of 3 hero or 3 villain characters from the movies. Each hero/villain has their own pros and cons associated with them and I found some to feel more powerful than others. The Emperor has the ability to cast arching bolts of lighting from his hands which sounds great, but in practice it makes hitting your targets over a distance quite difficult. Han on the other hand is great at taking out foes from a distance, while Luke and Vader tended to run straight into the thick of things dispatching enemies with their Lightsabers.
Moments like these, when heroes and villains would clash, quickly became a highlight of matches.

Walker Assault mixes the aspects from the other modes and shifts the balance to the Imperials, as the Rebels need to take out huge AT-ATs before they are overwhelmed. Bringing down these behemoths can seem like a daunting task, but finally destroying one is a very satisfying accomplishment. Due to the imbalance, playing as Rebels or Imperials is a very different experience as both teams need to employ different tactics. I found the Heroes vs. Villains mode very interesting as it does show a lot of potential. In this mode players are assigned either a hero/villain role or an infantry role, the aim is for one team to take out all three heroes/villains of the opposing team. Once a hero/villain is defeated that player spawns in as infantry. The mode was fun at first and seeing the iconic characters from Star Wars taking each other on (with help from the much underrated infantry) is exhilarating, but after a few matches I realized how chaotic these battles tended to become, and how little strategy was involved.

Then there is Fighter Squadron which has players choosing either a bomber or a fighter as they duke it out in the skies. The highlight of this mode is finding the power up that enables you to play as either the Millennium Falcon of Slave-1. I found this mode to be a fun distraction, although it is ultimately more fun to fly in the other modes where you have ground targets to focus on as well.

The last four modes are Cargo, Droid run, Blast and Hero Hunt. Cargo has players trying to capture the opponent’s cargo (a capture the flag variant). Droid run is another variant on point capture, but instead of capturing a stationary point players have to capture and escort mobile control points. Blast is an all out infantry based battle, first team to a 100 points win. In Hero Hunt one player takes on the role of one of the hero/villain units while they are being hunted by the other players designated as infantry.
These modes are fun distractions but ultimately they can’t compare to the Walker Assault, Supremacy and Drop Zone modes. Star Wars Battlefront is very casual friendly (in a good way). The game is really easy to get into and surviving a match never felt as daunting as it would in other competitive multiplayer shooters. This also extends to how weapons feel and handle, blasters do not need to be reloaded, and instead they overheat when fired continuously. Blaster accuracy also seemed to stay the same whether shooting down the sights or from the hip. Speaking of equipment, playing any of the modes earns players in game credits with which to unlock new equipment, weapons and skins. As players level they get access to more of these Star Cards, which they then can purchase in order to unlock specific equipment. This progression mechanic always gave me something to work to, be it a new grenade or a shiny new blaster.

In the end I found myself being a tiny bit disappointed with Star Wars Battlefront, not because it is a bad game , but rather because it could have been so much more. It’s a breath taking homage to all that is Star Wars, the game places you in the midst of the Star Wars universe and I enjoyed my time with it. Star Wars Battlefront is not a technical shooter as many other multiplayer shooters out there, but instead it tends to focus heavily on just being fun while tugging at your nostalgia nerve. With a flood of technical shooters in the market this is refreshing. Battlefront was made with Star Wars fans in mind, and it shows, as your enjoyment of the game, as well as the amount of time that you will be playing depends on your level of interest in this universe. I did feel that some of the game modes were added in order to make up for the lack of a single player campaign, and not all of these modes were equally good. I have no doubt that Star Wars Battlefront will keep evolving as EA continues to support the game with new DLC. I’m looking forward to see what EA has in store for us in the coming months.
Star Wars Battlefront is beautiful and faithfully captures the feel and emotions that I associate with Star Wars, it’s not necessarily the best competitive online shooter out there, but it is definitely one of the most fun online shooter experiences I’ve had in a while.