Looking At All-Star Squadron’s Headquarters, The Perisphere And Trylon 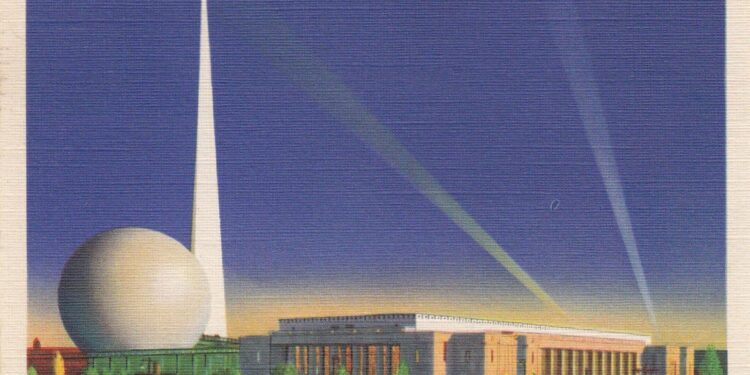 Back in the ’80s there was one comic book that was all about the ASS. Yes, the All-Star Squadron had one of the best acronyms going ever.

It was one that DC management worried about but, as a comic book, it was incredible. The characters were well-developed to the point of being just one step away from the ones in Watchmen. Finally, the unsung Golden Age heroes got a chance to shine in the 1940s environment. Plus, if nothing else, in a comic book world of acronyms like JLA and JSA this one always made me grin. In a move of complete ingenuity from the brilliant creative team of Roy Thomas, Jerry Ordway and Rich Butler, they had the ASS occupy the very real grounds of the old New York World’s Fair. Since this was set on Earth-2, not all of it was torn down once it was over. The statues and three-stage building of the Perisphere, Trylon and Helicline ramp were not only left intact but the main sections were reinforced and altered to suit the needs of a super-team on the go. But outside of comics, this place was real, it existed.

More than that, it was beautiful.

While I don’t have anywhere near the space to build a giant silver sphere 180 feet in diameter with a 610-foot tall triangular pylon next to it joined by a bridge and with a 950-foot long spiral ramp going down the outside – if I could I absolutely would. The walk up the ramp may have been fine for Johnny Quick or Robotman, but being lazy I’d probably invest in a segway or something. The chicken-wire fence outside made security a bit lax. The main doors may have been reinforced steel but villains like the Samurai, Tsunami, Kung, Prince Daka and others managed to make their way inside uninvited. Remind me to get one of those rude welcome mats for outside if I ever build this place.

The inside of the Perisphere was slightly redesigned, with the conveyor belt floor being replaced with hydraulic auditorium seating that could be raised or lowered to accommodate one or hundreds. The shell of the Perisphere on the inside was originally designed to be a diorama, with footage being screened on the massive walls and that function was kept, essentially making it a giant IMAX movie cinema with a wraparound screen. In the centre of the Perisphere was an elevator that could take the ASS down to personal quarters, meeting rooms, training rooms, a garage and more.

So what about the Trylon? It’s a huge spike sticking into the sky. Isn’t that just a bit ostentatious? Actually, it was functional, the top of it splitting apart and catapulting a prototype Curtis XP-55 aeroplane that the military gave them that they equipped with a spare motor from the Star-Spangled Kid’s Rocket Racer. This plane, the All-Star Special, could easily reach 500 MPH. How many homes come with built-in transportation? Hmm, then there’s the old problem of keeping the place clean. It’s a huge area to vacuum no matter which way you slice it, especially if you don’t have super-powers. Come to think of it, the ASS had powers and they still didn’t bother cleaning up after themselves. Like the Wombles, they make good use of the things that they find, and one of the highlights of the real World’s Fair World of Tomorrow were the Elektro robots on display. Thanks to some rewiring and reprogramming, the superheroes turned one of them into their robot butler called Gernsback.

I could see myself having a robot butler. There’s just something about the concept that works. I’d just avoid getting one like Gernsback though. It was more than a little creepy and the first time they introduced it (as a generic Elektro robot) the damn thing attacked them. After that, I wouldn’t be able to get a good night’s sleep there knowing this thing could kill me or any houseguest who may stop by. Just look at how Pepper reacted in Iron Man 3 when that suit of armour attacked her. Would you feel safe? Nope. There’s a lot to recommend about the Perisphere and Trylon of the All-Star Squadron. In terms of the look and feel of the place it had class and functionality, but even more than that it had some serious style. It was a vision of the world of tomorrow seen through the eyes of the past. While that future may not have happened, it looked good and was way ahead of its time.

Sometimes a little nostalgia helps when looking forward. It makes the future seem a bit brighter.