Star Ocean has always been one of the series that I wished the most success for. With a mix of fantasy and sci-fi settings and an exciting real-time battle system, it always seemed to be set-up just right to hit some high notes that other JRPGs didn’t. However, with it being six years since the previous release, which was itself a bit mediocre, is it too late for Star Ocean to fight back? [dropcap]I[/dropcap]ntegrity and Faithlessness (I+F) is essentially Star Ocean 5 without the number, and takes place between Star Ocean 2 and 3, although you don’t have to be familiar with any previous game to understand what’s going on here.

The story begins on a typical fantasy swords-and-magic world, and with the protagonist, Fidel, and his childhood friend Miki, discovering an amnesiatic girl named Relia next to a crashed spaceship. So far, about par for the course for a JRPG. I personally enjoyed the inversion of roles from Star Ocean 3: in that game, your characters are the ones crashing from space onto a medieval world.

In I+F, you’re seeing that same kind of event from the perspective of the natives, which adds a nice contrast to previous games a fan might have played. The majority of the plot is therefore driven by events involving both this strange girl and political events in this world, and when the greater idea of space is involved; it is only for tantalizingly short moments. Nevertheless, you eventually accumulate a full party of 7 playable characters, spread across the JRPG trope and gameplay mechanic needs evenly. 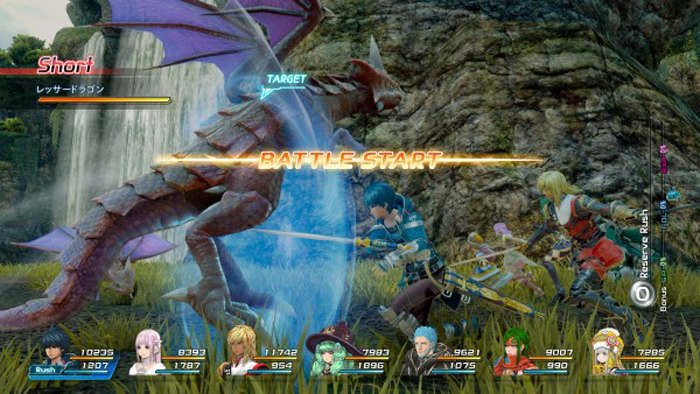 What I found interesting was that all 7 of your party members are available in battles at all times, with you being able to switch between active control on the fly. The AI handles the remainder, however, you can control it to some extent by equipping a limited amount of Roles, which reward certain actions and encourages the AI to avoid others. It’s sometimes an inelegant solution, not really as effective as the Gambit system from Final Fantasy XII even, and I found myself switching into active control to get most things done. However, having a full party of 7 on screen at all times remained a delight for me in general, and I’m glad we reached this point in this genre.

Combat itself is in real time, with light and heavy attacks, spells and healing and special moves available along with full tactical motion. The nearest comparison game to make is the Tales of Series. The battles are probably the best part of the game, but there were still some annoying areas. Certain battles feel like you’re meant to lose them and then improve next time with your tactics, which I’m fine with, but it’s made more annoying by the fact that your restarts are separated by endless unskippable cutscenes and other battles you already did. Some battles also have annoying sub-missions, like protecting an easily hit target. [pullquote]The game world is gorgeous, but the open world does sometimes feel a little empty…[/pullquote]

One of the philosophies of this game is that of seamlessness, which expresses itself in different ways: Cutscenes are limited; instead, they take place as conversations in real time that you control your characters movement in. Space battles take place in a similar way. Battles are found with visible monsters on the field that you touch and begin the battle with; without a transition screen even. The game world is gorgeous, but the open world does sometimes feel a little empty, and I would have actually enjoyed a couple more cutscenes than we had. The audio doesn’t always work perfectly in these live scenes, and characters can often talk over each other and leave you to miss important information.

Outside of battles, you have side missions, which often involve a collection of items and battle drops; as well as character interactions in towns; where you can meet and speak to various of your allies. How much you enjoy this depends on how much you enjoy the characters. For the most part, I felt they were okay, but not many characters stuck in my mind in a life changing the way. The crafting system in the game was interesting, but ultimately the game ended before I felt I got the most out of it that I could have. I+F feels overall to me like a game with some bright shining moments of potential, but when it came from a pedigree like this, with a developer like Tri-Ace, one would expect a little more from it. It’s a good, classic sort of JRPG at this stage, and definitely still fun, but where it used to be groundbreaking as a series, it now just feels middle-of-the-road. The plot isn’t particularly dynamic, and this installment feels outdone by the one from 2004 plotwise, which isn’t a great sign. A lot of fun, but disappointing in some regards as a release.