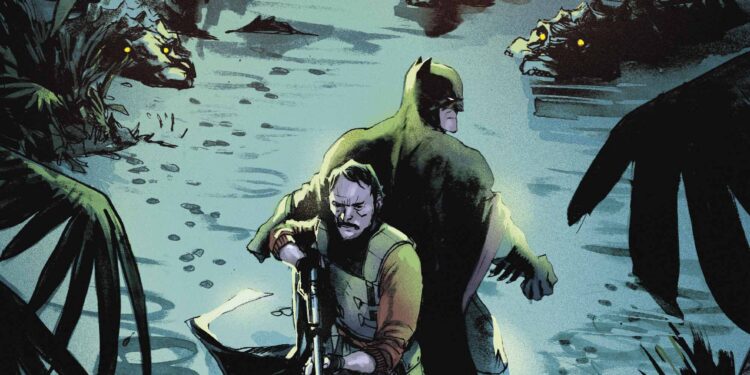 Well, this issue of All-Star Batman was different. Even though he’s one of the most beloved characters in the Bat universe, we don’t nearly get enough of Alfred Pennyworth. Scott Snyder has remedied this by penning an Alfred-centric story – and I’m down with that. In part one of “The First Ally”, the tale is split into the past and present, with Alfred narrating the whole thing as he assists Batman to catch his raggedy foe, Hush. After a powwow in Miami, the Dark Knight finally captures Tommy Elliot and extracts info from him about a smuggling deal that’s taking place in the city.

Bruce Wayne meets with the big cheese, Thatch, and his associates, but the deal quickly goes south after they think Bruce is Hush. Battling his way out of danger like only he can, Bruce eventually makes his way into Thatch’s room – only to find the smuggler dead and with his heart cut out. There’s a nice bait-and-switch that Snyder executes at the end, but I’m not about to ruin it for you. Let’s just say Alfred is pretty punk rock.

All-Star Batman #10 proves to be another action-packed affair, leaving you wondering how Snyder manages to cram so much ass-kicking and narrative into a story without it becoming schizophrenic. There’s hardly a moment to catch your breath before the next scene kicks in, but that’s really typical Snyder. Rafael Albuquerque handles the pencils and inks on this tale, whipping together a snazzy-looking book that’ll catch the eyes and attention of any comic book fan. That said, “The First Ally” stands out mostly due to Jordie Bellaire’s phenomenal colour palette. The tone and scheme scream “Miami” and it’s easy to get lost in this colourful world for hours on end.

Albuquerque pulls a double duty on this issue as he co-writes part one of “Killers-In-Law” with Rafael Scavone. Considering it’s only five pages in length, it’s difficult to judge this short, but it’s good to see that Bruce isn’t abusing the Matches Malone disguise and trying out something different. Additionally, Sebastián Fiumara’s art brought back a lot of memories of David Finch’s early run in Tom King’s Batman, which is definitely not a bad thing at all.

Every issue of All-Star Batman surprises me. Not one story is similar to the one before, nor does it feel tired in any way. You can tell that Snyder’s having the time of his life with this series, and it shows in the quality of this book. That’s ten home runs in a row, Scott. We can’t wait for the next issue.