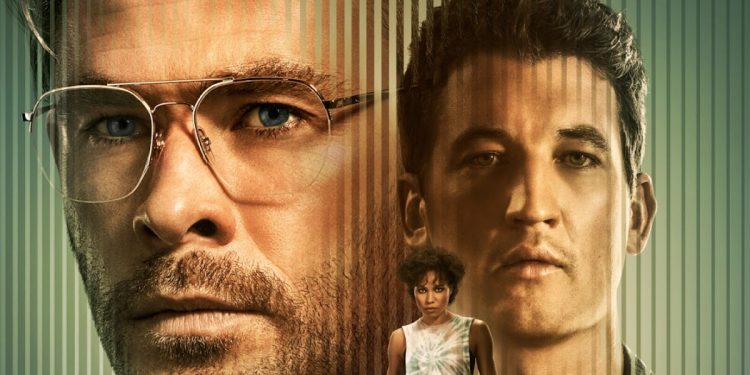 Netflix has finally released the trailer for its sci-fi action film, Spiderhead. Marvel actor Chris Hemsworth (who also serves as producer) stars in the forthcoming psychological thriller (loosely based on a 2010 New Yorker short story by George Saunders) as a pharmaceutical genius testing his revolutionary medications on unwilling test subjects while incarcerated in a futuristic prison.

And the good news is that it looks quite entertaining.

First announced in 2020, Spiderhead, which arrives on Netflix on June 17th, is directed by Joseph Kosinski (Top Gun: Maverick, Tron: Legacy, Oblivion) from a screenplay written by Deadpool and 6 Underground writers Rhett Reese and Paul Wernick. Aside from the God of Thunder, the film also stars Miles Teller, Jurnee Smollett, Tess Haubrich, and BeBe Bettencourt.

The synopsis reads: “In a state-of-the-art penitentiary run by brilliant visionary Steve Abnesti (Chris Hemsworth), inmates wear a surgically attached device that administers dosages of mind-altering drugs in exchange for commuted sentences. There are no bars, no cells, or orange jumpsuits,” says the synopsis. “In Spiderhead, incarcerated volunteers are free to be themselves. Until they’re not. At times, they’re a better version. Need to lighten up? There’s a drug for that. At a loss for words? There’s a drug for that, too. But when two subjects, Jeff (Miles Teller) and Lizzy (Jurnee Smollett), form a connection, their path to redemption take a twistier turn, as Abnesti’s experiments start to push the limits of free will altogether.”

If you enjoy action crime dramas with a touch of comedy, the Spiderhead trailer promises a good time.

The Marvel actor is quite busy lately. Hemsworth’s Extraction 2 is coming to the streaming service soon too. Fans also have his portrayal of WWE champion Hulk Hogan to look forward to. And, of course, there’s also the third Thor solo film, Taika Waititi’s Thor: Love and Thunder, arriving in July.

Watch the trailer for Spiderhead below.