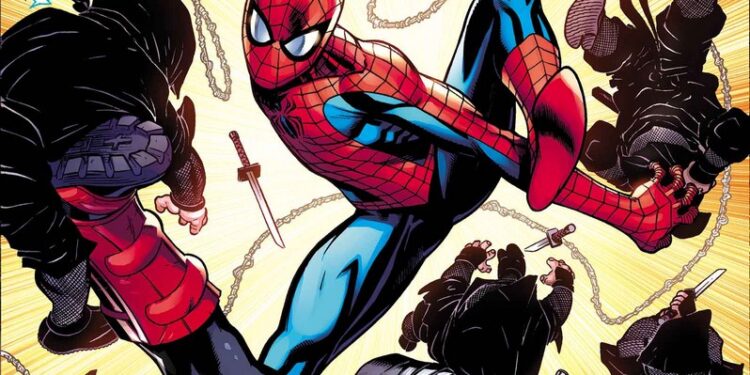 Wait, is Spider-Man/Deadpool #8 the conclusion to the Isn’t It Bromantic? storyline? Hmm. Let’s consider that a typo and ignore it… With Deadpool taking a time out to reflect on killing Peter Parker twice, Peter needs to put his sharp mind to work and figure out the identity of the mysterious villain Patient Zero who wants him dead. It’s one thing to hire Deadpool to kill Parker – any villain could do that – but who could impersonate Peter Parker and infiltrate Parker Industries so well that nobody would notice? And, for that matter, what did Patient Zero take while he was there?

With things being so serious, Parker decides to switch to his black Spider-Man costume and tracks down a remorseful Deadpool. Sharing some personal moments, Deadpool has to admit that shooting Peter Parker in the face probably wasn’t the best idea he ever had, and then resurrecting him just to shoot him to death a second time was probably worse. He’s ashamed of his actions, but there’s no time for that as our dynamic duo invade Patient Zero’s glass house for a darker showdown than Spider-Man’s used to… Okay, this has to be said: that two-month break hasn’t helped the momentum of Spider-Man/Deadpool #8‘s storyline. Don’t get me wrong, those two filler issues preceding this were funny. I mean, what’s not to love about a Spidey-and-‘Pool-hit-Hollywood satire and a flashback-style tale where they took swipes at today’s political shenanigans? But when a storyline has been as good as Isn’t It Bromantic? it’s a shame it had to take a break. Still… Spider-Man/Deadpool #8 is a great issue of what’s rapidly becoming Marvel’s best double-act in years.

Joe Kelly’s writing is as good as it was back on his first Deadpool run, if not better. Of all the writers to handle the merc with a mouth, Kelly’s been the most consistent in creating a sympathetic-yet-fun character. His handling of Spider-Man is equally sure-footed, reminding us that there’s more to him than virtue, guilt and comedy. The chemistry they share here is incredibly layered and still this story’s strongest aspect. Likewise, artist Ed McGuinness conveys both the playfulness of their relationship as well as the seriousness of the story with his usual skill. There are a few homages, the mystery continues to unfold in intriguing ways, and the next issue is set up with a great cliffhanger. I hate to play favourites here but I have to. Deadpool in his own comics lately has been stale and dull, but if you’re after him at his best then read this. Likewise, if you’re a fan of the web-head then this one’s for you too. Individually they’re great, but together they’re amazing.

Wait. Spider-Man is already amazing. And spectacular. Uh… What, has he got the monopoly on adjectives?!

Damn it, just read this comic and enjoy it.